The onset of night turned the busy streets of Seoul into dusky lanes frequented by veiled women, daring foreigners, sinister robbers, and even ghosts.

The night streets of Seoul have fascinated foreign visitors since Korea’s opening to the West in 1882. There was something mystical in the manner that the city transformed from day to night. During the hours of light, the bustling streets were the domain of men, children and animals, but during the hours of darkness they became the sequestered domain of women.

Horace N. Allen, a missionary doctor living in Seoul in the mid-1880s, wrote:

“The street traveler will also hasten to his home or stopping-place, for between the ringing of the evening chimes and the tolling of the bell to announce the approach of dawn, all men must absent themselves from the streets, which then are taken possession of by the women, who even, then, as they flit from house to house with their little paper lanterns, go veiled lest some passing official should see their faces.”

The only men allowed out at night were officials on business, blind men, and foreigners.  One of these early foreign night prowlers was Percival Lowell, who spent the winter of 1883/84 in Seoul and provides us with one of the earliest descriptions of the Korean night watchman and his assistant.

According to Lowell, the watchman carried a large lantern in one hand and swung a bell in the other:

“He kept up this continuous ringing in order to give any thief that might happen to be about due warning to escape.”

Those who were foolish enough not to escape were apprehended and bound with the chains that the assistant carried. But crime at night wasn’t really a problem because of the male curfew. 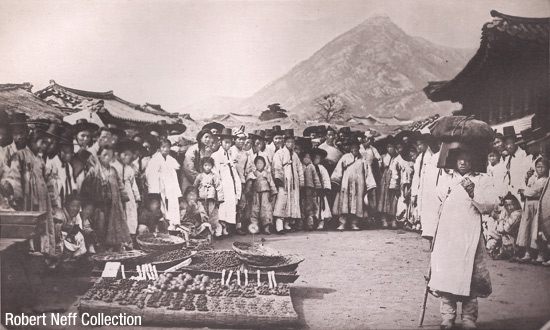 Korean onlookers in Seoul in 1884

By the late 1890s, the curfew had disappeared but the streets of Seoul still remained for the most part deserted. The dark and serpentine streets were now the haunts of thieves and highwaymen and even the police and night watchmen were not safe from their depredations.

One early Austrian visitor to the city felt that the approach of darkness cast the city into a brooding “death-like” silence.

he wrote. He then went on to describe the denizens of the city as “robed in white—each and all mute” flitting through the streets of the endless graveyard until they disappeared into the depths of their tomb-like homes.

But it wasn’t only the human monsters that the city’s residents feared. One palace was abandoned because it was claimed to be haunted by the spirits of those killed during a recent revolt. Spirits of executed prisoners were believed to roam the main streets near Jongno and Gwanghwamun. Near the Independence Gate, goblins and other malevolent spirits assaulted Korean travelers and cut their prized top-knots from their heads. 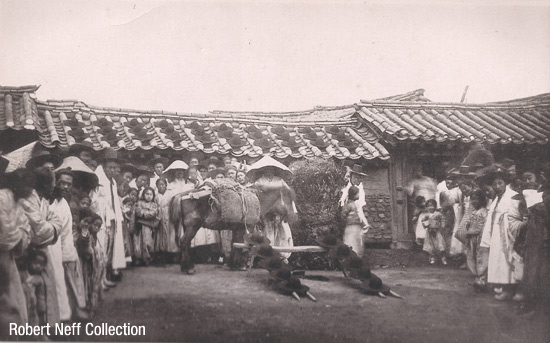 But not all of the undead were Koreans. A ghost with “a white face, yellow hair, blue eyes and red lips” haunted some of the gates—its cry like that of a child. Japanese spirits were said to roam the streets as well. This compelled women (who were apparently especially vulnerable to these ghosts) to carry ground-up red pepper to ward off their approach, as Japanese ghosts were said to fear red pepper.

Westerners, however, seemed to have been exempt from these evils. Many of them lived in homes that were said to be haunted and yet, to the best of my knowledge, none of them ever reported seeing a ghost.

With the introduction of modern lights and streetcars much of the fear of darkness dissipated. By the dawn of the twentieth century, as today, the streets of Seoul at night were filled with revelers going to or returning from parties and gatherings with friends. Banished by technology, the ghosts of Seoul today only remain in the worn pages of journals and history books.