3 Amazing Virtual Reality Cafes In Seoul To Immerse Yourself At 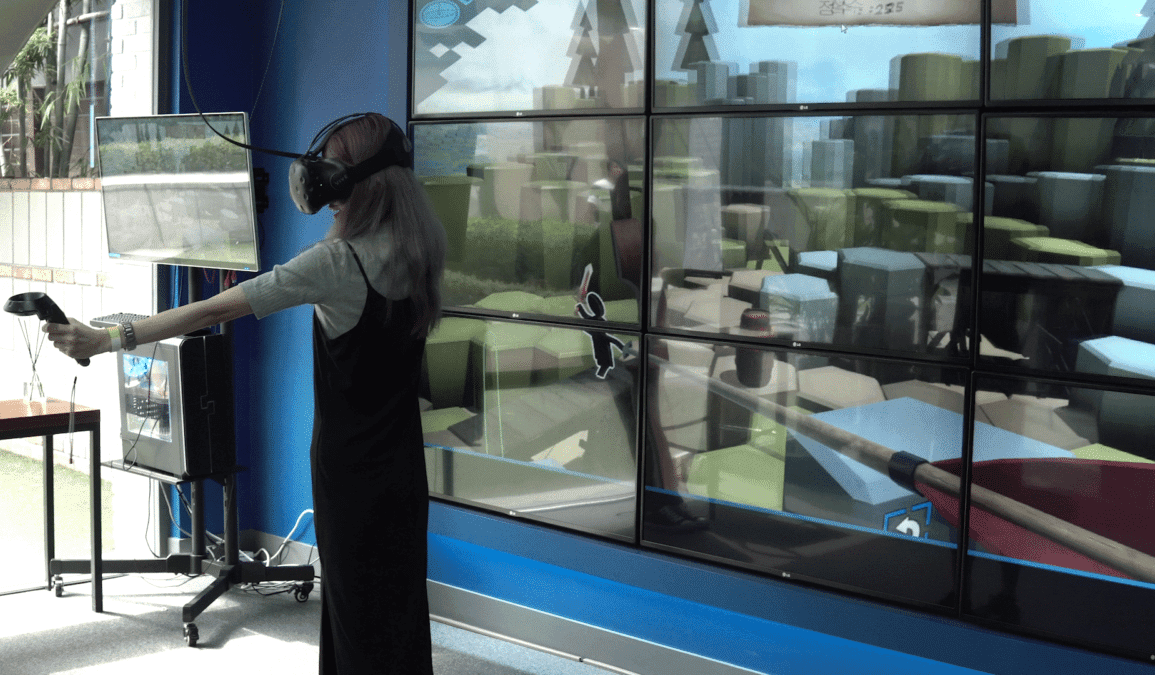 South Korea has been growing as one of the most technologically advanced countries in the world so it’s no surprise when the latest trend, virtual reality(VR), has been popping up in complexes and cafes around Seoul. That is why we made a list of the top 3 virtual reality cafes in Seoul.

Virtual reality or VR is a computer-generated simulation of an environment that you can interact with or simply immerse yourself into a virtual world.

VR can be used for education, entertainment, psychology, and obviously, gaming.

The first place we visited was #VR(Hashtag VR) in Hongdae. The location was not hard to find and we were excited to finally see what the hype was all about. Once we entered the old looking building, we took an elevator up to the VR floor and was immediately transported into another place. The modern decor clashed with everything around it.

We were taken aback by the white walls, black furniture and welcoming blue neon lights signs. The staff greeted us confusingly because neither of us spoke Korean and they didn’t speak English very well. After a bit of confusion, we finally figured out that it was ₩10,000 per person for 70 minutes and that we were able to play as many games as we want in that amount of time.

The first game we chose was “Richie’s Plank Experience” where you try to collect as many donuts as you can, sounds easy, but the catch is that the donuts are placed on the end of a plank that’s sticking out of a skyscraper. The staff leads us into one of the VR rooms and as soon as the staff placed the HTC headset on my coworker, she started shrieking and shaking.

I looked over at the tv screen that shows what she’s seeing inside the headset, and thought her reaction seemed fitting. We played a few other horror games which led to more shaking and shrieking. The staff assisted and gave us tips the whole time which was very helpful to noobs like us.

The next place we went was VR+ or VR Plus Cafe in Gangnam. We had high expectations for this one with it being the first VR cafe in Seoul and also the most hyped. The cafe is located near Gangnam Station Exit 1 which made getting there very easy. Walking in, we noticed that the staff were much less engaging.

We ordered our drinks and chose our game set which was 5 games for ₩15,000. There are 4 Zones; the VIVE Zone, the Oculus Zone, the PLAYSTATION VR Zone and the VR Attraction Zone. We thought we could try the “Richie’s Plank Experience” game so we could have a fair comparison. We didn’t realize we only got one try here unlike #VR(where we could have as many lives as we wanted), so when we lost a life, that was it.

On to the next, we tried the racing car game with interactive seats that moved according to your movements in the game, it was nothing more special than the ones at any other normal arcade. The whole 5 games took no more than 30 minutes and we were done. Their smoothies were good though. So far our experience at two virtual reality cafes In Seoul, on to the last one.

The last place we went to was VRIZ which has a PC and VR zone, also located in Hongdae. This cafe was much bigger than the first two virtual reality cafes in Seoul. We noticed a lot of high school students and they were mostly in groups. The cafe offered 2 types of VR rooms – small rooms for 2,3 people(₩20,000) and big rooms for 4-6 people(₩30,000).

Although the staff didn’t speak much English, they were very friendly and tried their best to explain to us how everything works. The rooms were very private compared to the other places and the staff doesn’t stay in the room with you but you can always call them for assistance. This is perfect for first timers because you feel relaxed playing just amongst your friends in the private room. Once we paid, a staff took us into one of the rooms and started to explain how the equipments worked and how to choose the games.

After the staff left the room, we struggled a bit but after a few minutes, we figured out how everything worked and we started. It was just an hour of us messing around doing whatever we wanted inside the virtual games, it was pretty fun letting loose without the pressure of strangers around.

Each place had a different vibe to them, it all comes down to what you prefer whether it’s having fun with friends or just chilling on your own. The combination of VR and coffee might sound odd but it works! A place you can chill, relax, as well as play the latest VR games. It’s basically gamers’ heaven. Check out these virtual reality cafes in Seoul the next time you plan a hangout with your friends!

If you enjoyed this article about virtual reality cafes in Seoul you should also check out The 7 Best Uniquely Themed Cafes Around Seoul. Also, looking to expand your client base? Hosting an event that our readership would be interested in? Advertise with 10 Magazine.