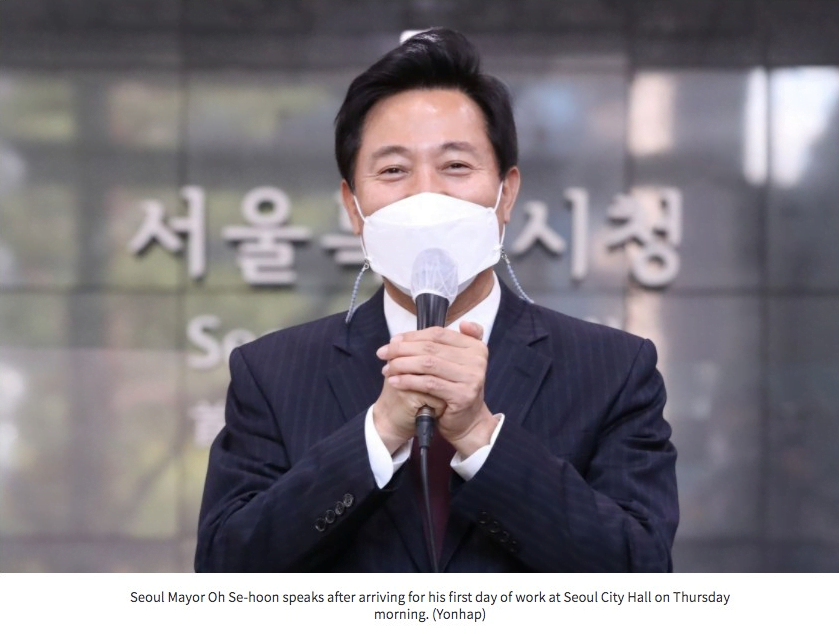 Oh Se-hoon was elected the 38th Mayor of Seoul during South Korea’s by-elections held on April 7th, 2021. As a representative of the conservative opposition People Power Party (PPP), Oh defeated the ruling Democratic Party’s candidate Park Young-sun in the election. This win is said to signify the South Korean people’s dissatisfaction with the current administration of President Moon Jae-in and its failure to keep the nation’s real estate market under control, which has seen housing prices soar in the greater Seoul Metropolitan Area (SMA).

We are looking at an interesting political figure, as Oh Se-hoon previously served as Seoul mayor a decade ago, but voluntarily quit the position, following through on his threat to leave if a referendum on school lunches he was backing did not pass.

In July 2020, South Korea was shaken by the news of then Seoul Mayor Park Won-soon’s sexual harassment accusations. One of his former secretaries filed a complaint on July 8th that year, accusing Park of continuously sexually harassing her physically and via digital means during the previous four years, which brought her great mental distress. The following day, Park’s daughter reported him missing around 5 p.m., only for the police to later find his corpse on a northern Seoul mountain following an extensive search that went long into the night.

The death was ruled a suicide and the whole situation shocked many Koreans as Park Won-soon had been widely respected and appreciated for his work as mayor. Investigations after his death showed that Park’s accuser had made legitimate claims, which prompted heavy criticism from citizens in regard to the late mayor and his abuse of power.

Most city mayors in South Korea serve terms of five years, but when an incumbent resigns, passes away, or loses the right to hold their position, by-elections are held for a replacement to serve out their remaining term. Since Oh Se-hoon won a by-election to become Seoul mayor following Park Won-soon’s death, the former’s term will last 15 months until June 30, 2022.

Who is Oh Se-hoon, the “new” Mayor of Seoul?

After graduating from Korea University’s prestigious School of Law, Oh Se-hoon began his career as a successful attorney who won numerous significant cases. He developed an interest in politics and attended the Graduate School of Social Science and Public Policy at King’s College London as a fellow, where he studied successful examples of major cities around the world improving their economy and job market.

Oh was eventually elected as a lawmaker for the nation’s conservative party in the 14th National Assembly of South Korea in 2000, officially beginning his career in politics. Oh made a name for himself by pushing for laws that brought more transparency to money in politics, which even led to complaints from some of his fellow party members.

In 2006, Oh Se-hoon successfully ran for Seoul mayor, so he is not new to the role. During this first term, Oh pursued multiple ambitious design projects, including the now-famous Dongdaemun Design Plaza (DDP) and Sebitseom (세빛섬). Sebitseom are three artificial islands in Seoul’s Han River. Some of his ideas were less successful, however, such as the attempt at subway stations without roofs, which led to constant flooding.

In 2010, Oh Se-hoon was re-elected to a second term, but that ended with his early resignation. At the time, Oh opposed the City Council’s proposal to offer free lunches to all school children, and insisted that it be restricted to the poor and needy – and bet his mayoral position that the citizens of Seoul would agree. They didn’t. After losing the referendum on the issue of free school lunches for children, Oh resigned from mayorship.

“Seoul, the heart of the Republic of Korea, can beat again.” – Oh Se-hoon

Throughout his campaign, Oh Se-hoon made several promises to the citizens of Seoul. His top priority is fighting the COVID-19 pandemic by introducing safety measures that will help ease the restrictions on small local businesses and reduce the negative impact the pandemic has had on them.

Another promise is that of solving Seoul’s current “real estate depression”. Oh Se-hoon plans to achieve this by pushing for heavy reforms on housing and development policies and regulations, ideally resulting in an increased supply of housing units and reduced real estate prices and taxes.

As such, the “new” mayor hopes Seoul will become a better city for those in their 20s and 30s, many of whom have lost hope that they will ever earn enough money to own a home in the capital city of Seoul. Moreover, because many young people live alone, Oh aims to make the city a place where single-person households can also live comfortably and happily.

We look forward to seeing what Mayor Oh can accomplish during his tenure.

To keep up-to-date with South Korean politics, please see our list of the best Korean News Sources in English.

What do you think about Oh Se-hoon, the “new” Seoul mayor? Leave a comment below!