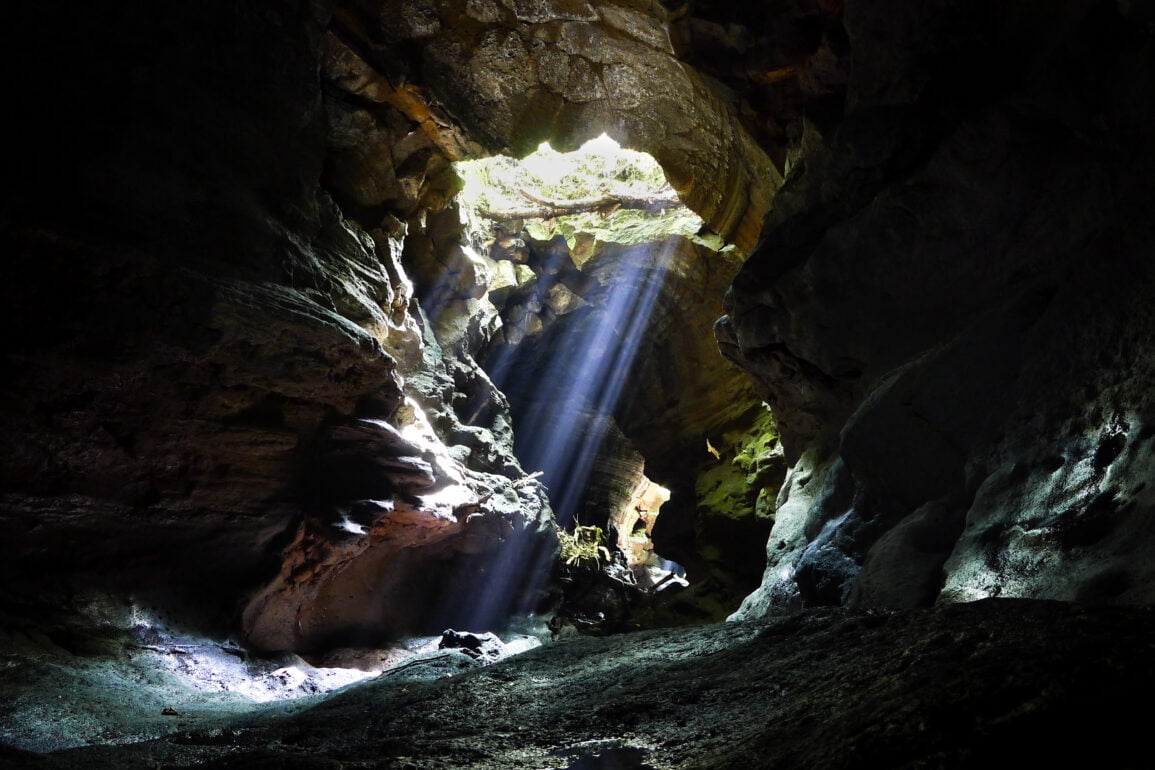 Inside the closed cave in Hallasan national park

What’s in a Cave?

Soluble rock! That’s what’s in a cave. The terrain of soluble rock and a wet enough climate combine to hollow out a “landscape” under a landscape.

In general, caves require rainfall and chemically erodible material. Calcium carbonate limestone and other sedimentary carbonates, technically described as Karst landforms, make up much of that material.

With sufficient time liquid under the power of gravity finds its way down to the water table through the natural faults and joints of rock, widening out weak points as it flows. Should conditions prove suitable, dissolved mineral additives precipitate out of the solution into speleothems or cave formations. These include stalactites, stalagmites, columns, flowstone and draperies, shields, and cave coral.

Suitable conditions for cave formation can be found, among other places, in the mountain ranges forming the traditional “spine” of Korea. Traveling down the Chungcheong expressway to Danyang in North Chungcheong Province, there is a 70-kilometer “arc” of half a dozen major caves extending north-north east, up to Yeongweol and then east across into the territory near Taebaek, that encompasses most of the major caves open to the public in Korea.

One cave type that does not require rainfall and erodible material would be a “lava tube” formed igneous when a flowing conduit of lava cools quickly on the outside, hardening. While the liquid lava continues flowing on internally where the heat is still held, the lava ultimately dissipates at one end, its former trail hollowing out into a “tube” of rock.

Several notable examples of these exist on Jeju Island. One of the larger and more accessible is Manjanggul on the northeast of the island. (Hallim Park in the northwest also includes a smaller lava tube open to visitors.)

Manjanggul cave is bone-dry and lacks formations like stalactites, stalagmites, or flow-stone of any sort. But it is impressive in its own way. The walk continues along the length of the lava tube for a kilometer before it is arbitrarily closed to the public, the lava tube itself continuing on for some considerable distance beyond. Visitors walk in and walk out along the same route.

ManjanGul: There is an eerie sensation when walking down Manjang Gul, where you can imagine the tremendous heat and the frightening magnitude of a volcanic eruption that must have been necessary to produce enough liquid rock for the cave’s formation.

Gosu (Danyang), Gossi (Yeongwol), and Daekum (half an hour out of Samcheok along route 36) are all caves that are principally convoluted and braided natural tunnels. Each requires perhaps a little over an hour to fully walkthrough. They are thoroughly enjoyable clambers up and down metal staircases, across metal-plated walkways, and onto specifically constructed viewing platforms at particular stopping points that enable you to appreciate the major highlights of each of the caves. The routes are well lit up with foot lighting.

Gosu: Gosu Cave in Danyang, North Chungcheong Province is a heavily frequented local attraction, with alleys of small restaurants and souvenir shops lining the routes in and out of the cave.

Gosu is large enough though that you may comfortably remain standing upright throughout, although it does feature a lot of “vertical movement” (meaning hauling yourself up steel stair work!).

Gossi: While Gossi Cave in Yeongwol, Gangwon-do is very popular, it also has the occasional point where you will need to duck your head in a pronounced fashion. Wearing one of the work helmets provided is required upon entrance, as the cave features a tunnel roof that decidedly “dips” in places.

Gossi Cave lies across the river from the ticketing office and car park complex…take the pedestrian bridge!

Daekum: All of these caves have “pools” at some points, or else stretches of flowing water. However, only Daekum has a very active stream running through it, featuring an internal waterfall of some substance.

Dark also requires an accompanying guide and a reservation in advance on a Korean-only website. The entrance staff claim, perhaps with some justification, that these strictures have preserved the quality of the formations within the Daekum complex, especially as compared to other caves. Arrival at the cave occurs in a reasonably dramatic fashion courtesy of a purpose-built monorail.

In any list of Korea’s caves, mention deserves to be made of Hwaam Cave (northwest of Taebaek, near the Coal Mining Museum), which in addition to its natural tunnels has a small chamber beautifully decked out with colored lighting.

However, Hwanseongul (immediately near Daekum cave) must necessarily be the “final” cave you choose to tour, as it is just so utterly magnificent that every cave you may happen to visit in Korea will only ever be compared unfavorably.

Hwanseongul: It’s true that if you have hiked Mammoth Caves in Kentucky or toured the gargantuan Sarawk Chamber in Gunung Mulu, Hwanseongul will seem tame. However, should you happen not to have done so, the Gangwon-do chamber cave is a genuinely magnificent spectacle.

Similar to nearby Daekum Cave (they are in the same complex!), a tiny monorail delivers visitors to Hwanseongul’s main entrance. Just 100 meters behind this, an enormous “domed roof” with several stories of height gives you an idea of the scale of this cave. The ceiling is deliberately lit up by powerful flood lights, without which you would never even be able to even make out the expanse of rock above you.

The cathedral-like interior is genuinely awe-inspiring…a massive main chamber that marches off into the distance for over a kilometer, with several smaller subsidiary chambers off on either side. The path side lighting which might otherwise seem a little garish is dwarfed by the majestic grandeur of the place. It even contains a couple of small suspension bridges built purely for the enjoyment (they sway underfoot!) of the general public.

The only possible complaint? If you’re a purist, for its all size, Hwanseongul lacks formations insignificant number. It can also become frustratingly crowded if you choose to tour it at the wrong time. The first or last tours that miss the maddening crowds bused in from far afield will be well worth the trouble.

If you are interested in visiting caves in Korea, check out the list of places you could go on TripAdvisor!

Malcolm West is now in his twelfth and final year in Korea (for the foreseeable future!). An instructor at Incheon University, he is thankful for the many wonderful memories in Korea that he will soon be looking back on.