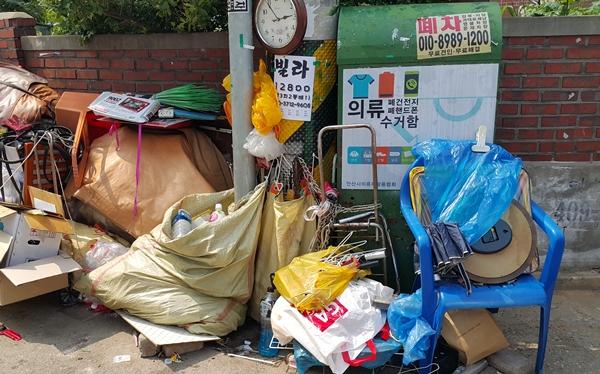 Korea is awash in clothes…

…And when Koreans’ closets overflow, they go for the win-win by donating the excess in green, brown, and gray donation boxes (“의류수거함”) that pepper neighborhoods in cities all over the country. Koreans and foreigners alike stuff them with old shirts, shoes, even bedding, and feel all warm and fuzzy about having done something good for those in need. However many are still unaware that the contents of these boxes often don’t end up on the backs of Korean families.

The current system of donation boxes started in the wake of the 1990’s IMF crisis as an effort to help those in the most dire financial straits. However, there are no uniform rules for implementation and operation—in Seoul, each district office (gu-cheong) is responsible for its own policy—and in most cases these boxes are not operated directly by the local government.

Instead charities and other non-profit organizations, as well as for-profit businesses are designated to operate the bins. The rules are often lax though, and it is unknown who runs some of them. As a result, donation boxes have become largely a private enterprise in which most donated clothing is sold by the kilogram in developing regions like Africa and Southeast Asia.

According to a representative at Seodaemun District Office, the five-hundred boxes in their district are all privately operated, and the donations from which are all exported. A  District representative told 10 Magazine that their district office has nothing at all to do with the boxes, and so could not comment on what happens to the donations. And given the lack of centralized regulation, the story is no doubt similar across the rest of Seoul.

According to a story in the Seoul National Unversity Journal (The Seoul Journal), some boxes have no identifying information at all. Calls made by 10 Magazine to numbers on several boxes yielded only automated ‘not-in-service’ messages. Many dealers have even illegally borrowed the names of authorized charitable organizations to avoid scrutiny by local governments.

Operating costs aside, these private dealers make pure profit off of clothes that were given away freely with the intent to help people of limited means. Worse, due to fluctuations in used clothing prices abroad, many boxes have been neglected and fallen into disrepair, serving now as little more than garbage receptacles that draw the ire of neighborhood residents.

But there have been some efforts to change. The Seoul Journal story mentioned above described the 2012 efforts of Gwanak-gu to rein in the murky business of donation boxes. According to used clothing task force leader Jeon Seung-Jin, all for-profit bins in Gwanak-gu were removed and a system of boxes run by charitable organizations were installed.

There are now around 1500 bins in Gwanak-gu, all run by non-profit organizations. Jeon said the used clothing is sorted at a collection center in Gyeonggi-do, where much of it is sold to organizations serving the needy and the remainder is sold to authorized exporters. These exporters are still making a profit, but the system is at least transparent and accountable, and the profits from selling to these dealers back into operating the bins.

This is all to say that the current system is sorely in need of an update. In recent years, the Seoul city government has acknowledged as much amid the continued public outcry over the shabby aesthetic the bins often create. Gwanak-gu can be seen as a model for how to move forward and make the system more transparent and beholden to the communities in which it operates is a good start.

According to Seodaemun-gu Recycling Team Leader Jo Gye-won, in 2019 Seoul will hand down a city-wide set of regulations to revamp the donation bins. No details have as yet been anounced, and city officials were unable to be reached for comment.

Where Your 3-Year-Old Cable Knit Sweater Should Go

There are organizations that can help ensure that your donations go to the needy in your neighborhood. “Goodwill Store (굿윌스토어)”, an American based charity, has locations all over Seoul, and takes only direct donations. The branch near Jeungsan Station (Line 6, Seodaemun-gu) takes everything from clothing and bedding to toys and appliances. According to the branch manager, every item donated is meticulously documented, and tax-deductible receipts are available.

Their products are priced to meet the needs of low income households, and one hundred per cent of their profit goes back into running the business. And if you can’t make it to the store to drop off your donation, they will come to you and pick it up (a list of donation center contact numbers can be found here, under ‘기증문의’). They also provide work opportunities for North Korean refugees and the mentally or physically challenged.

Another option is “Beautiful Store (아름다운가게).” They’re a non-profit that, like Goodwill Store, takes only direct donations and has locations all around Seoul.

They will also come to you if you’re unable to drop off your donation. Like Goodwill Store, they too sell their products at a very low cost and use all profits to run their organization. Beautiful Store also has an English version of their website, and the option of registering a donation online.

Editors Note: A reader suggested 옷캔 (Otcan), another company handling clothes donations in Korea. They are based in Daejeon, but you can send your donations or use their pickup service.

Not Just a Korean Problem

A cursory online search nets dozens of articles from around the world detailing Goodwill box scams or almost-scams that trick or mislead donors. Some for-profit and non-profit organizations that collect used apparel do re-sell them for well-meaning reasons, however, most people are still woefully misinformed about where their donations end up.

And in a materially abundant world where the desire for new stuff increases daily, the amount of used stuff swells at an extraordinary pace. It’s an opportunity to do good, but it has also created a niche in the clothing market that can be easily exploited for profit. If you’re looking to help people in your own community, bypassing the boxes and donating directly to a charitable organization is your safest bet.