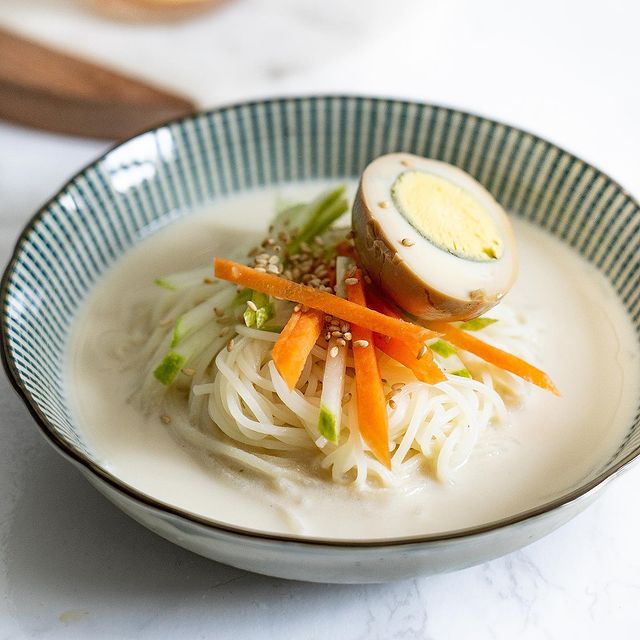 Available only during the hot months of the year, kong-guk-su is an icy-cold bowl of soupy bean health served with a huge dose of noodles. Filling and delicious, this is Korea’s other cold noodle dish and the one you can’t get year round.

Kong (콩) means bean, while kuk-su (국수) is another word for noodle. Many of you will be familiar with Korea’s “knife noodles”, or kal-guk-su (칼국수). This dish is likely made from the exact same noodle, but the similarity ends there as both the stock it sits in and the temperature it is served at are diametrically opposed. While kal-guk-su has a clear, usually seafood-based broth served piping hot, kong-guk-su floats in a milky, bean-based broth with ice on top to keep it nice and chilled.

As for the ingredients, it’s not exactly the most complicated dish. Primarily white beans are used, but in the last few years, a “black food” trend has started, and often black beans are being used. Keep an eye out for this 검은 콩국수 (Black Bean Noodles) as it makes for a particularly tasty broth. After choosing the beans, a kong-guk-su cook will boil them up a bit and throw them in a mixer or blender, possibly with some sesame seeds. The nice places will throw in some expensive pine nuts as well. Blend and you’ve got your broth.

Should you decide to try this dish for the first time, you’ll be glad you read this far because now I’m going to give you a little secret: it almost always arrives at your table unseasoned. Hence, as soon as it lands in front of you, the first step is to take your spoon and get a nice sample of the bean stock to find out if it is one of the blandest things you’ve ever tasted. If it is, look around the table for the salt which is likely sitting in a small container next to the napkins with a mini-spoon sticking out of it.

The good news is Koreans know their salt, and it’s probably a good sea salt in that little jar. From there add to your heart’s content but do so very slowly while mixing thoroughly and tasting repeatedly. You’re in danger of ruining your whole meal if you end up salting too much in one area while sampling another.

Your Korean friends are likely to tell you that you’re putting in too much salt. Ignore them. As long as you follow these instructions, the dish will eventually be the flavor you want, so don’t stop until it’s just the way you like it. Even after adding salt to your heart’s content, there’s probably still way less sodium in your broth than in the kimchi they had for breakfast, lunch, and dinner anyway.

Originally opened in 1974, this kong-guk-su restaurant moved in 1987 to its current location on the first basement floor of Yeouido Department Store. Summer months bring in a full house, with as many as 100 customers hoping to fight the heat with cold bowls of Jinji Jip’s most famous dish. Don’t be surprised to wait in line during lunchtime or to be met with “Sorry, we’re all out of kong-guk-su” by dinner.  Seasoned with salt and paired with the tangy crunch of kimchi, the dish is guaranteed to make you a regular customer. Try their spicy-sweet bibim guksu or warm hand-cut kalguksu the second (or third, or fourth) time around.
Yeouido Department Store B1 Floor, Yeongdeungpo-gu, Seoul #5. 02-780-6108

Going strong for over 32 years, Jaeil Kongjib specializes in traditional bean dishes. Beans are soaked and softened in water overnight and ground fresh every morning to make soups, tofu, cheonggukjang, and more. Preserving the natural sweetness of soybeans in its kong-guk-su, Kongjip’s fresh flavors are sure to satisfy (and its famous side dishes are an added bonus!). Gongreung-dong 633-1, behind Seoul District Court. 02-972-0001

What sets Matjarang’s kong-guk-su apart from the rest is its buckwheat noodles, which give the dish a unique and tasty flavor. Slurping up the thick soybean soup, Korean-style, has been described as devouring a thirst-quenching nutty milkshake. The soup is so popular that the restaurant even sells it in bottles!
987-7 Daechi-2dong, Gangnam-gu, Seoul. 02-563-9646