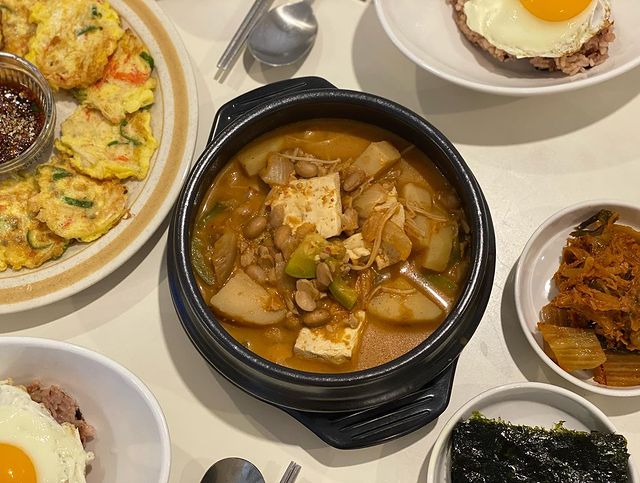 It’s rather appropriate that this dish is being featured the same month as Korea’s bizarre foods. As there are so many off-the-wall Korean foods, cheonggukjang didn’t quite make the top 10 – but don’t let that trick you into thinking it’s tame! The smell is often compared to locker rooms and smelly socks, and its preparation has been known to draw the ire of neighbors both abroad and in Korea. You know when the family next door is cooking this stuff.

Despite its uniqueness, however, it’s absolutely delicious once you’ve acquired the taste for it, as is the case with many fermented foods, and it’s as healthy as it gets. Asians routinely have much lower instances of breast cancer than in the West, part of which is attributed to their high consumption of beans in the form of tofu, doenjang (된장, bean paste – known in Japan as “miso”), and our cuisine of the month (the Japanese version of which is called “natto”). Research has also shown this probiotic food to have a positive impact on cholesterol levels and help with lean muscle gain.

The pick this month actually comes as a request from a friend of mine who lived in Korea for many years but now resides in Malaysia. Ian Woodcock loves this food, and when he saw me and my mother-in-law making ssam bap (쌈밥) in our video from April (search for “ssam bap” on youtube.com) he Facebooked in his request for cheonggukjang so he could make his own down in Malaysia.

The problem that he will sadly run into is that the most important ingredient – the fermented soybeans – needs to come from a quality supplier, and there are too many cheap imitations out there. I suggest that you order online from Andong Jaebiwon (안동재비원 andongjebiwon.co.kr), which I had the honor of getting a tour of many years ago.

They still make their cheonggukjang the old-fashioned way, boiling it up in large steel pots on an open fire and then tucking it in nicely for a few days’ rest on an ondol floor and covered in blankets. You may want to order some of their amazing doenjang as well.

This dish is typically consumed in the form of jjigae (찌개, stew), and mixing in bean paste is a typical way to add some flavor and saltiness to the dish. That being said, many Koreans just eat it with yoghurt or rice to enjoy the health benefits along with the taste.

Then again, if you have some courage, a few days, a yoghurt maker and some bacillus subtilis bacteria, then you can also make your own cheonggukjang from regular old soybeans anywhere in the world. Good luck, Ian!

15 years ago, an old lady from Andong opened a gopchang restaurant in Seoul and served cheonggukjang on the side made with soybeans grown by her siblings back home. Turns out the cheonggukjang was an even bigger draw than the gopchang, so she changed the focus and the name. Avoid lunch time – you won’t get a seat! 35-8 Seongbuk-1 dong, Seongbuk-gu, Seoul, near Hansung Univ. Stn. (line 4, exit 5). 02-743-8104

This chain of jjigae joints goes back to basics, making jang (장, seasoning) the old-fashioned way. All of the different kinds of jjigae are worth a slurp, but the cheonggukjang will keep you coming back for more. Original location: 570-5 Sinsa-dong, Gangnam-gu, Seoul. Other locations in Seoul, Incheon, etc. zzigae.com 02-547-9292

Following the crowd is not usually a good idea, but when the line’s out the door in Korea, you know you’ve found something pretty incredible. Cheonggukjang at Twelve Baskets is healthy and not overpriced (W7,000), and more importantly it was sampled by the cast of the uber-popular Korean variety show Infinite Challenge (무한도전). Original location: Namyang Building, 590 Sannam-dong, Heungdeok-gu, Cheongju-si, Chungbuk. Other branches are found in Songdo, Gyeongju, etc. Korea.12bg.kr
043-291-8812
=============