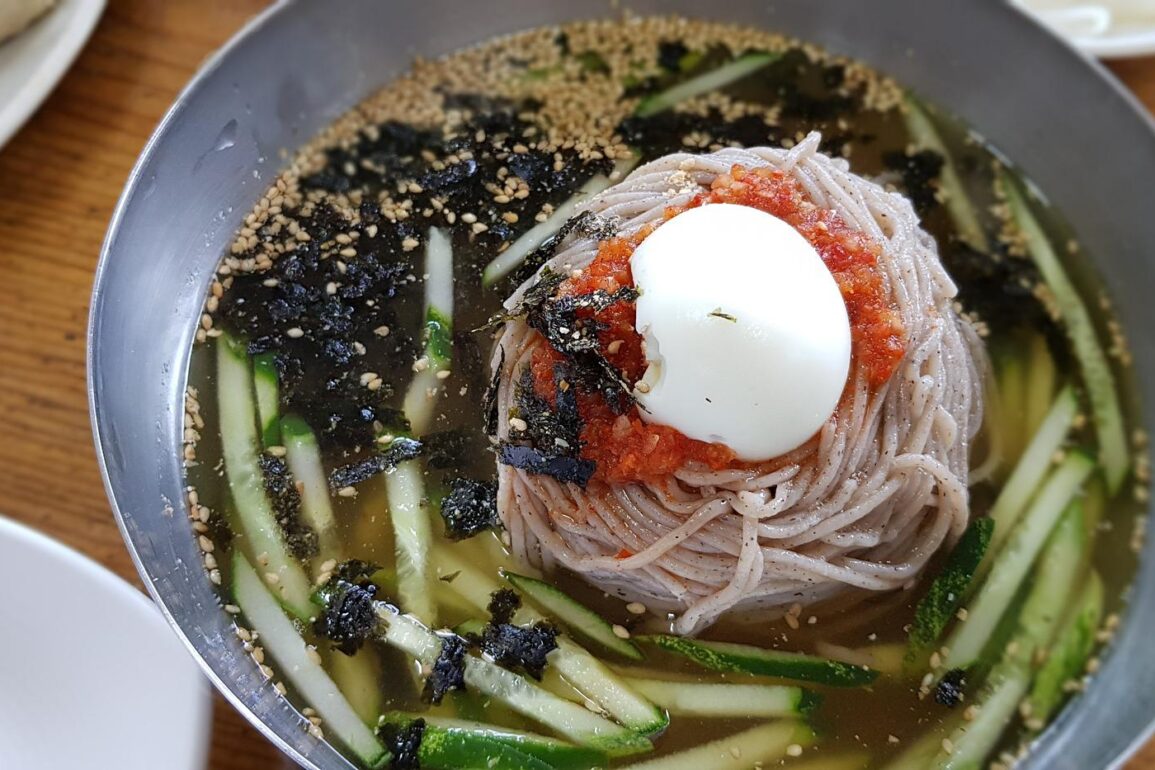 Cold noodles are a great Korean summer standby and this version may be the one you don’t know about. Naeng-myeon (냉면 – literally cold noodles) is of course the most famous, and you can find that everywhere, including at your local barbecue joint.

Then what is the Makguksu?

Makguksu on the other hand isn’t so common, although it often may come delivered to your door. I just ordered this at home the other day and it was a spectacular score. Unfortunately ordering delivery makguksu in Korea can be a little hit and miss, particularly when traveling as you may get garbage delivered to your hotel room since they know you’re not likely to be a return customer. But every once in a while you can find a gem that delivers a makguksu to die for.

“Mak” in this case means something along the lines of “the kitchen sink.” It’s hard to tell you exactly what will go into this dish as it’s rather random, but you can count on a few things. First, you can count on some buckwheat noodles. You may find “memil” noodles on the menu in other locations, as memil means buckwheat, but if you order memil noodles you’ll end up with a soy sauce-based dish nothing like makguksu. That’s because the second thing you can count on with makguksu is a sweet sauce.

As with a lot of Korean cuisines, there is a region that is famous for serving the best versions of this dish – Gangwon Province. You pretty much can’t go wrong ordering this dish in Gangwon, but it always behooves you to do some research (and we’ve done a little for you below). If you’re headed out to Seoul and Gyeong-gi Province’s eastern neighbor, ask a Korean friend or your concierge to point you in the direction of a place famous for delivering a good makguksu.

You’ll experience a savory mix of cold buckwheat noodles with a sweet-spicy sauce and plenty of fresh, crunchy vegetables (many Koreans won’t eat anything without some sort of crunch nearby, hence the strange custom of pickles with pizza and spaghetti). This is also a popular dish in Chungcheong Province and you can count on finding it at any place that serves dak-galbi. If you’re headed out for dak-galbi, be sure to bring along a few extra friends so you can try yourself a little makguksu along with one of the most popular dishes for foreigners in Korea. (FYI, dak-galbi took the number one spot in our survey of the most popular Korean dishes for our readers.)

Maemil-hun 메밀헌
This chain of restaurants originally began as a makguksu shop in Gangwon-do 30 years ago, but has since widened its umbrella to serve a variety of buckwheat dishes. Nonetheless its original dongchimi makguksu (W6,000 – W8,000), served in a chilled broth of year-long fermented dongchimi kimchi, still remains the undisputed customer favorite. The Cheongdam-dong branch has satisfied a number of Korean celebrities from its neighboring JYP Entertainment building, including K-pop sensation the Wonder Girls. Original location: 671-1 Jibyeon-dong, Gangneung-si, Gangwon-do.
Other branches are found in Cheongdam-dong, Gangnam-gu, and around Seoul. memilhouse.com1600-5851

Bongpyeong Hyundae Makguksu 봉평현대막국수
What better place to enjoy buckwheat noodles than the buckwheat capital of Korea? Known as one of the three best places to eat makguksu in Bongpyeong (and believe us, that’s saying something!), the restaurant attracts both locals and tourists seeking a taste of the dish made right.

Chuncheon Makguksu Sangol-myunok  춘천막국수 산골면옥
Don’t expect trendy interiors here, or decor of any kind, really. This makguksu joint has relied on its food and its food only since 1962 — and boy has it done spectacularly for itself. It moved to Euljiro from its original location in Chuncheon (the home of makguksu) in 1971, making it the oldest Chuncheon makguksu house in Seoul. The restaurant boasts multiple television features and a constant crowd of customers eager for a refreshing taste of their noodles and famed dongchimi broth.