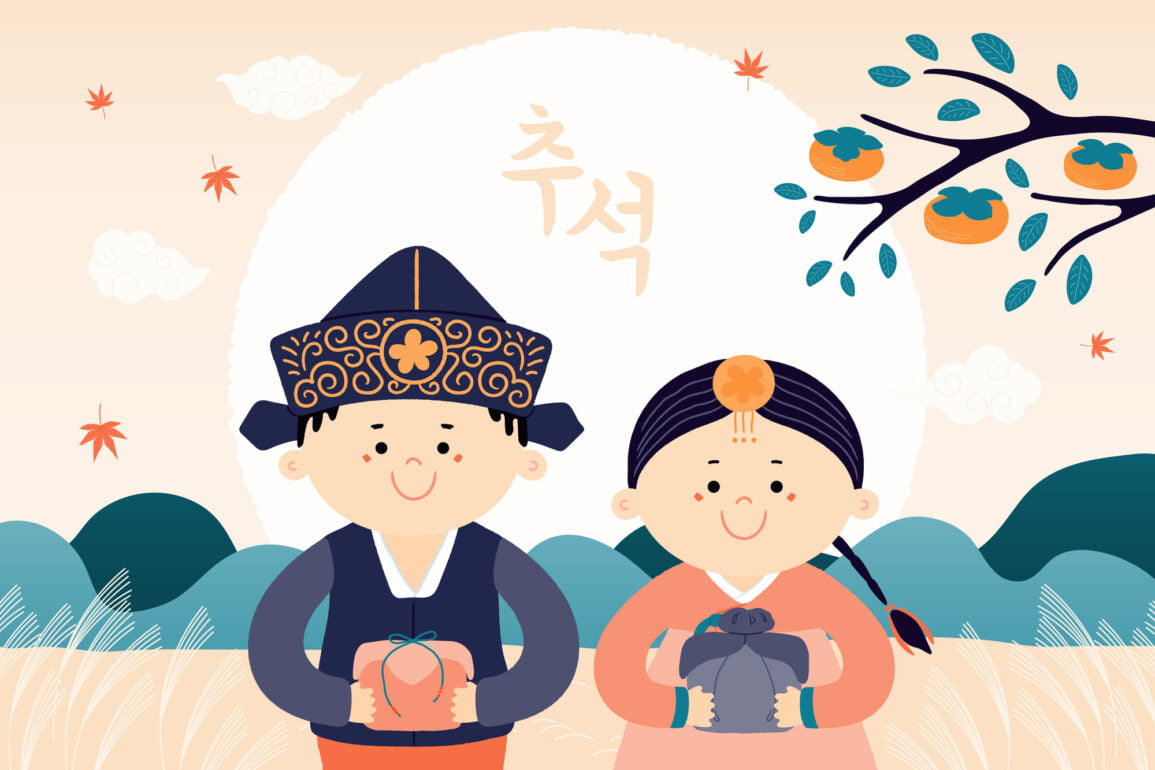 In 2022, Chuseok will be celebrated from Sep 9th (Fri) to Sep 12nd (Sun). These days are public holiday dates in South Korea.

Chuseok (추석) – otherwise known as Hangawi (한가위) by Koreans or as “Korean Thanksgiving” by Westerners – is one of the most significant public holidays in Korea, together with Seollal or the Korean New Year (설날). It falls on the 15th of the 8th month in the lunar calendar, on the day of the harvest moon (the largest full moon of the year) and it lasts three days, including the day before and the day after the set date. Chuseok is meant to celebrate the autumn harvest (Chuseok = “Autumn Eve”).

When it comes to the history of this holiday, there are several theories out there. One of them says that Chuseok originates from Gabae (가배), a competition started almost 2000 years ago by Shilla’s third king, King Yuri. The women in the kingdom were split into two teams and were made to compete in a month-long weaving contest. Whichever team weaved more cloth by the deadline of the competition (the 14th of the 8th month or the day right before Chuseok) won and was treated to a true feast, full of delicious foods and drinks, courtesy of the losing team.

Another theory says that Chuseok came from the celebrations of a historic win of Silla over the Kingdom of Baekje. These celebrations included weaving, archery, martial arts and, of course, feasting, which is a crucial element of Chuseok celebrations today, as well.

Finally, one last theory says Chuseok can find its origins in shamanistic rituals dedicated to the harvest moon, when people would make offerings to gods, but also to ancestors, showing their respect. Today, as well, showing respect and honoring one’s ancestors is an essential part of Chuseok.

Because of the importance of Chuseok, there are a large variety of traditions and customs. During this holiday, most Koreans return to their hometowns to visit and spend time with their families, which means that traffic jams are bound to occur on the way out from Seoul.

In the days leading up to Chuseok, Korean families visit the graves of their ancestors, a ritual called seongmyo (성묘), in order to pay their respects and perform beolcho (벌초), or cleaning the weeds and the overgrown grass around the gravesite.

On the morning of Chuseok, another important tradition is holding an ancestral ritual called charye (차례). During charye, Koreans pay respects to their ancestors by placing various foods (rice, meat, rice cakes, soup, fruits, vegetables) and drinks, like Korean rice wine makkeolli (막걸리) or soju (소주), on a table in front of pictures of the deceased. They thank them and ask them to continue watching over the family, hoping for prosperity. Although nowadays this ritual is held at home, it used to be held right by the graves.

More than these rituals themselves, the fact that families are reunited and get to spend time together for a few days is the most important thing during Chuseok, especially since for many it represents a much anticipated break from the fast paced daily life in Korean society.

The representative food of Chuseok is songpyeon (송편), half-moon shaped rice cakes filled with a variety of healthy ingredients such as sweet red beans, sugar and sesame seeds, pine nuts, honey and, in some regions, even clams! As the name suggests (songpyeon = “pine tree”), these rice cakes are steamed over pine needles in order to get a specific aroma embedded in them, making songpyeon special compared to other types of rice cakes.

The half-moon shape is not random and it symbolizes victory and a bright future, originating from a legend about Silla’s win over the Kingdom of Baekje. The strange markings resembling a full moon and a half moon on the back of a turtle discovered during the reign of Baekje’s last king were interpreted as a prophecy of the Kingdom’s fall. The prophecy came to be true, as Silla (the half moon) soon defeated Baekje (the full moon). Mirroring this, the songpyeon rice cake wrapping resembles a full moon initially, then it gets the shape of a half moon after being filled and folded.

Making songpyeon is an activity for the whole family, although it is mostly the women and the kids participating. It is said that the prettier you can make these tiny rice cakes, the more handsome your future husband and the more beautiful your daughters will be, so make sure you give it your all if you ever get the chance to make songpyeon for Chuseok!

Ssireum (씨름) is thought to be one of the oldest sports in Korea, with a history of about 5000 years, dating back to the Goguryeo Dynasty. It is a wrestling match where opponents grab each other by a rope (red and blue) wrapped around the waist and leg and try to put the other’s upper body to the ground. Back in the day the competition was fierce, since the winners would get consistent prizes such as bags of rice or even a cow.

Ganggansullae (강강술래) consists of a group of women dressed in pretty hanbok (한복) joining hands in a circle under the full moon, while dancing and singing “ganggangsullae”. This tradition is said to come from a war tactic born during the Imjin War (the Japanese invasion of Korea in 1592–1598), when Joseon’s famous Admiral Yi Sun-shin had women dress up as soldiers and dance in circles around fires at night by the mountains to fool the Japanese into thinking that the Korean army was larger than it actually was. The strategy is said to have actually worked, leading to many won battles for the Koreans.

Juldarigi (줄다리기), or tug-of-war, was a game the whole village would take part in, but it was also seen as a rite to predict if the year’s harvest would be rich or not, depending on the winning team.

Nowadays, however, these games are not easy to see during Chuseok, except in organized events, in Korean folk villages or in cultural centers across the country. Logistically speaking, organizing a match of ssireum in the living room doesn’t sound very practical, does it?

Going back to your hometown empty-handed for Chuseok is a big no-no, so Koreans always make sure to get some gifts for their family members. Even before Chuseok, all stores start offering all kinds of products specially designed to be fit as a Chuseok gift. Some popular Chuseok gifts include boxes and boxes of spam (sometimes coupled with oil and tuna in fancy looking gift packaging), fruit baskets, expensive beef, cosmetics and ginseng root or similar products that promise to improve health. Check out 10 Magazine’s list of 10 ridiculously priced Korean Chuseok gift sets to get a better idea of how it works.

Chuseok, as you have seen, involves lots of preparations, traveling, gifts and many other things that certainly increase spending. Not only are the costs high, but the long driving hours and the never ending preparations take a serious toll on both mind and body, making Chuseok very stressful overall. Because of all these reasons, Koreans’ lifestyle is changing and traditions are not followed as strictly, with younger generations either organizing smaller, simpler family gatherings, or giving up on family gatherings altogether and choosing to travel instead.

How to say “Happy Chuseok” in Korean

There are multiple ways of wishing someone a “Happy Chuseok” in Korean. Here are some of them:

More on this topic: Travelling During Chuseok In Korea 100 Years Ago

How do you celebrate Chuseok in Korea? Let us know in the comments!