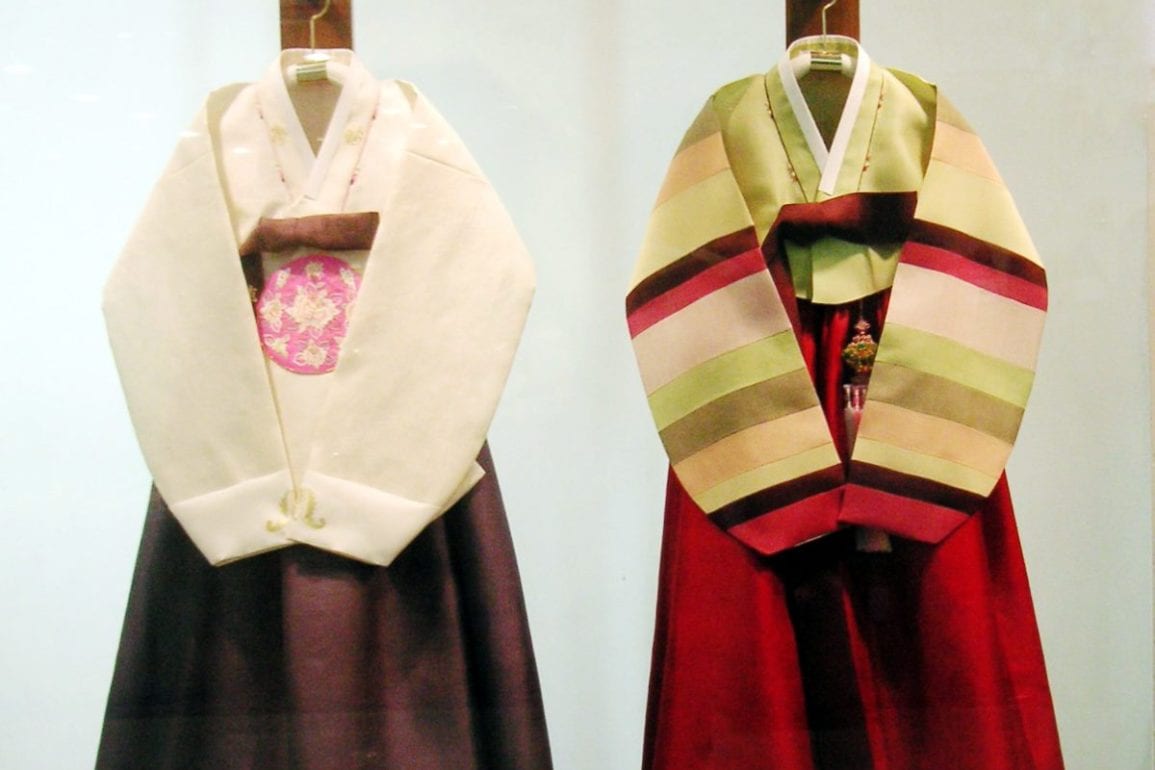 When was the last time you saw someone wearing hanbok to work, or on the subway during peak hours?

The presence of this Korean traditional dress in daily life has all but disappeared from the streets and workplaces of South Korea. What happened? Globalization, in conjunction with rapid changes in Korean lifestyle, has made hanbok seem like an impractical apparel option for modern Koreans.

Can anything be done to resuscitate traditional Korean dress and bring it back from the brink of extinction?

Some may say that nations have a responsibility to protect their cultural assets through laws or incentives. In a nearby example, the Japanese government has taken measures to ensure that the kimono maintains its presence in modern Japanese culture. Those who wear traditional dress to the workplace can even receive government-sponsored benefits and discounts. As a result of cultural preservation, many Japanese still utilize traditional geta and zoji shoes and casual yukata styles in their daily lives.

The Korean government attempted to make similar policy changes in 1996 to encourage its citizens to wear hanbok, including the creation of a still-standing piece of legislature exempting hanbok designers from paying taxes. However, catching the bus during rush hour while wearing the large, billowing layers of traditional hanbok is hardly practical, and much remains to be done to support the art of creating and wearing Korean traditional dress.

The Modernization of Hanbok Fashion

Despite its domestic rarity, hanbok has begun to appear on international runways, with the 2011 collections of Caroline Herrera and Christian Dior both featuring hanbok-inspired styles. As hanbok gains global exposure, restrictions affecting the way it was traditionally worn have begun to break down. During the Joseon and pre-Joseon dynasties, certain styles, hats, and colors were constructed solely for men, while other pieces and patterns were reserved for women – but the gender divide is disappearing in modern interpretations.

For example, all-red hanbok traditionally associated with masculinity and royalty have been adapted by modern designers to suit women’s fashion while still maintaining the color’s assertive, majestic impression (right). Other hanbok designs and hues used to distinguish between social classes are being reinterpreted for a class-free society. The color white, historically worn by the common classes, has now been appropriated for women’s fusion wedding hanbok (previous page).

Despite an apparent revival of hanbok through modern and fusion fashion, the question remains: how might one wear hanbok in a modern setting?

Korea’s fickle weather lends another concern. Fortunately, certain elements of the hanbok can be accentuated or supplemented with other materials.  In the winters of the past, a small fur vest was generally worn over the hanbok, so a modern hanbok wearer can easily add a trendy fur layer over the top of the hanbok, or add fur accessories during the chilly Seollal holiday. Finally, mixing hanbok with modern items such as heels and sweaters is not a bad option, and it also effectively brings hanbok into the 21st century.

Where Can I Find Hanbok?

There are any number of hanbok stores around Seoul, but a smarter option is to try finding good-quality secondhand hanbok in the Dongmyo market (line 4) near Dongdaemun.  Koreans often buy expensive hanbok and wear them only once or twice before giving them away to purchase new styles, so most secondhand hanbok are in pristine condition.  Hanbok accessories can also be sourced from Dongdaemun and Insadong.

The future of hanbok depends heavily on how much is invested in preserving and maintaining its history and design. Following the globalization of Korean culture through dramas and K-pop, hanbok is now familiar to a much wider international audience – meaning that the responsibility of protecting and nurturing it does not lie solely with Korean designers.

Of course, the hanbok of the future will not be the same hanbok that was worn in the past, as even during the long Joseon Dynasty there were significant shifts in its design. Cho Mira of high-end hanbok design house Baekoaksoo states, “While hanbok dress is traditional, hanbok is not a dying fashion. In its 5,000-year history hanbok has seen many outward changes. Regardless, very few countries have the privilege of saying they have a traditional dress [as defined as ours].”

Even now hanbok is evolving to fit a new purpose and a new generation of wearers. Fusion hanbok designers are finding new ways to incorporate traditional symbolism as well as the aesthetic appeal of modern wear. The hanbok will not be left behind, and it will find its rightful place among modern society.

Deconstruction of the Hanbok

To understand the modernization of hanbok, the artistic and functional importance of each piece should first be outlined and understood:

Jeogori 저고리: Top part of the hanbok that includes a long ribbon-tie

Binyeo 비녀: Traditional headbands, headdresses, and hair pins, which are diverse in range and color

The Best of Modern Hanbok

Traditional Korean Dress Company Baekoaksoo is a luxury hanbok designer based in Cheongdam-dong, Seoul. Baekoaksoo has been a family-owned, family-operated business for many generations, and all hanbok are made on the premises using only the finest traditional materials and techniques.

Luigina Webb is originally from Australia but has traveled to over 30 countries and studied abroad in Israel, the US, and South Korea, where she now works as an interpreter. She owns a large collection of Korean traditional hats and headdresses, which she hopes to turn into an exhibit one day. Check out her hanbok-related writings at luiginakorea.com.

If you would like to try on a hanbok yourself, check this out for more information!