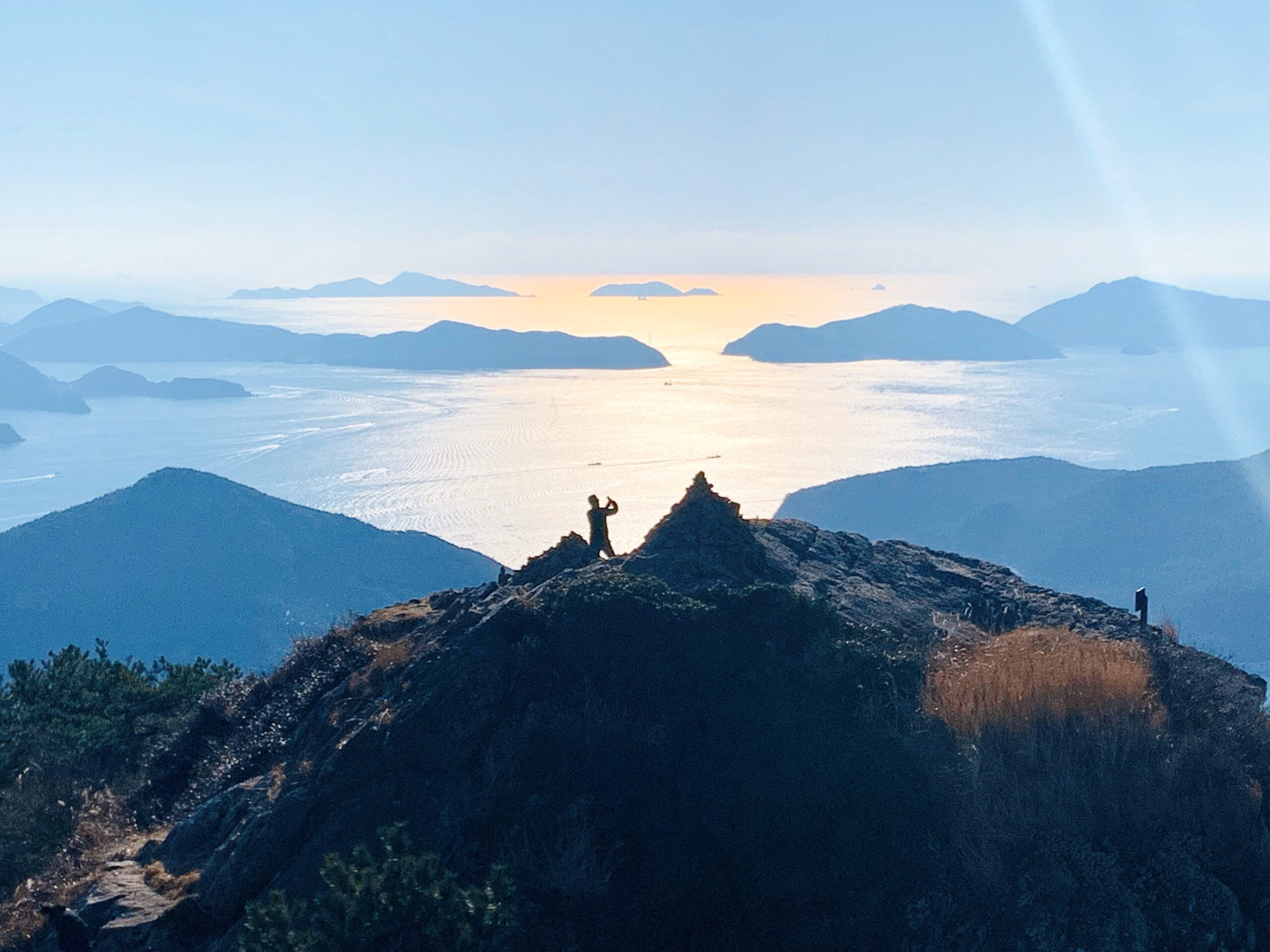 Whether you hike your way up to the top or get whisked up via Korea’s longest cable car, the summit of Mireuksan greets you with a beautiful vista of the sea sprinkled with islands all the way to the horizon. It’s breathtaking. Your gaze bounces from island to island — some are mere pebbles peeking out of the waves, some stretch long and wide and rise into towering green mountains. Maybe you spot a tiny village or secluded beach and wonder which of the steady, stately procession of ferries might be headed that way. And there are fishing boats too, large and small, gliding between the islands. Then you notice the water itself: clean, rich, royal blue, dotted with buoys and markers and traps and seaweed farms and long lines of slowly growing oysters. And then you suddenly realize why this place, Tongyeong, calls itself “The Land of Sea.” They believe that the city’s very existence flows from the sea, their fates inexorably intertwined.

Then you spot Tongyeong’s beating heart: the harbor. It’s a short taxi ride away, and as soon as I stepped out of the car I could feel the city’s quick and vibrant pulse. Seawater courses through Tongyeong’s veins. The sidewalks are lined with fresh seafood snacks, everything from shrimp dumplings to roasted cuttlefish. My favorite is the octopus legs (문어다리) — lightly blanched, then grilled to order for a flavor that’s toasty sweet and soft as gnocchi.

The harbor also holds a dizzying variety of two of Tongyeong’s most famous foods: honey bread (꿀빵) and chungmu kimbap (충무김밥). Each is a must eat.

Honey bread is a kind of sticky sweet doughnut, traditionally filled with red bean paste and sprinkled with sesame seeds, but variations abound. Start with Tongyeong Ae Ggulbbang (통영애꿀빵) and then try some other places for variety.

Chungmu kimbap is Tongyeong’s unique version of the Korean staple. Thin cylinders of rice are wrapped in local seaweed and served alongside a pile of radish kimchi and spicy, vinegary seasoned squid. There are so many shops with so many claims to fame, but I say start with Fat Granny (뚱보할매).

After gorging myself on honey bread and kimbap, I made my way to Dongpirang Wall Mural Village (동피랑 벽화마을), a charming labyrinth of murals, shops, and cafes whose alleys slowly wind higher and higher over the harbor. I grabbed a terrace table at Haemaru Hill (해마루언덕) and sipped coffee while watching the sun set over the harbor. The owner gave me some free homemade rice porridge (죽) that she made with sun-dried Tongyeong sweet potatoes. Somehow, against all odds, I eventually found myself hungry again. So I strolled down to Tongyeong Jungang Market (중앙시장).

If the harbor is Tongyeong’s heart, then the market is its soul. The surrounding sea’s alien bounty is on display in all its varied brilliant splendor — and much of it is still alive. There’s an exuberance that other domestic seafood markets can’t match. You can feel the merchants’ pride, the care they put into presenting their catch.

What most people do is pick out a fresh fish paired with various sea creatures and then head into the adjoining dining room for a seafood feast that’s as fresh as it gets. This is an excellent idea.

But! If you’ve done that before at other markets and want to try something spectacularly different, then head deeper into the market, where tucked away in one of the farthest corners you’ll find Yokjido Mackerel Sashimi (충청도 회초장 욕지도 고등어 회).

You’ll know what to order before even entering the place because next to the front door stands a brick furnace — kind of like a pizza oven — whose sole mission is to blast fresh mackerels into utter crispy juicy deliciousness. It’s the pièce de résistance of their mackerel set menu. Except that everything else on the set menu is just as good. The mackerel sashimi is just as divine, with a flavor that’s so different from the furnace-blasted version that you’ll marvel at how it can even be the same fish. The seafood soup (매운탕) is a spicy counterpoint, a change of pace in texture, temperature, and complexity. And the real surprise of the night might have been the anchovy sashimi (생멸치회) — so simple and sublime I found myself shaking my head in disbelief.

So many islands in Tongyeong, so little time

The next morning I decided to visit one of the dozens of nearby islands, but I had no idea which one to choose. Each island has its own alluring combination of scenery, hikes, parks, beaches, scuba diving, fishing, cycling, and food. Thankfully the friendly staff at the ferry terminal’s information desk helped me sort it all out and I chose Yokjido (욕지도), which just so happened to be where last night’s mackerel came from.

After a 90-minute ferry ride (including a nap on the heated floors of the ship’s “ondol”  room) I arrived at Yokjido’s idyllic little port. Hills rose up all around. Fishing boats bobbed languidly at the docks. Here and there sat little snack stalls and seafood tent restaurants.

I have an incurable addiction to tent restaurants but somehow managed to pass them all by on my way to an excellent lunch at a place called Haenyeochon Sikdang (해녀촌식당), named after the women who free dive for shellfish. The abalone porridge (전복죽) was ethereal. A sign on the wall proclaimed that every ingredient comes from right there in Yokjido. Sea to table.

After lunch I met up with a small Korean group for a three-hour mini tour of the island. First stop was the brand new monorail that clickety-clacks you to the top of Mount Cheonhwang (천황산). Imagine the world’s longest slow-motion roller coaster. At first the contraption looks really, really frightening but once you set off you realize it’s merely a little frightening — and a lot of fun. The view from the top is spectacular. Do not be alarmed at the periodic screams from descending monorail passengers. It’s not that bad. They’re totally fine, and you will be too.

Next up was a coastal walk at Pelican Rock. In the space of an hour you’re treated to rolling fields, lush trails, a pedestrian suspension bridge, doughnuts, and gorgeous sheer rock cliffs overlooking the sea. (Yes, I said doughnuts.)

I would’ve loved to have spent another day exploring or maybe even biking around the island. Next time. Instead I settled for a snack and coffee at MuMu Bakery while I waited for the ferry.

Back in Tongyeong in time for dinner, I walked over to Tongyeong Myungga (통영명가) for an oyster feast. Ninety percent of Korea’s oysters are grown here and they’re prized for their subtle flavor and plump flesh. Tongyeong Myungga offers an epic oyster course menu that includes seven styles of oysters (two raw styles, pan fried, deep fried, dressed, steamed, and simmered) plus a wide variety of side dishes.

As delicious as oysters are, they aren’t very caloric so no matter how many you eat, when you leave you’ll probably still be hungry. This is, in fact, a good thing.

Because a few blocks away is one of Tongyeong’s most unassuming culinary gems. It’s known as “The Place with No Sign Across from Lacoste” (라코스테 맞은 편 간판 없는 집) and it’s just a window and stainless steel counter facing the sidewalk. Inside, for over 15 years, a husband and wife duo have been crafting bowl after lip-smacking bowl of Ujja (우짜), a unique Tongyeong invention that’s basically udon with jjajangmyeon sauce. You can find it all over town — for a more highbrow take, check out With Ujja (위드우짜) — but No Sign’s version is particularly addictive, with just the right balance between broth and sauce. It’s perfect for late night snacking. They’re open till 3:00 a.m. and no trip to Tongyeong is complete until you’ve tried it.