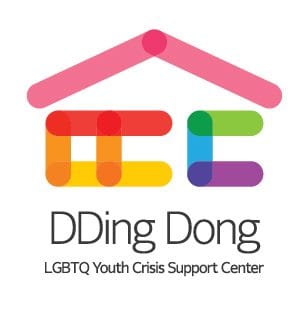 There are still many challenges ahead for the LGBT community in Korea as the human rights charter that would have banned discrimination based on sexual orientation and gender identity was disapproved by previous human rights lawyer and Seoul Mayor Park Won-soon. The event became a major controversy that sparked greater awareness and debate for LGBT issues. Among the many programs that emerged concurrently to support the LGBT community is Dding Dong, which provides shelter for LGBT youths undergoing violence, abuse, and psychological trauma.

LGBT youths are often victims of abuse by their peers and the people closest to them, particularly their parents, other family members, or members of their religious community. In fact, studies show that LGBT youths are more likely to become homeless and are 2-3 times more at risk of committing suicide than heterosexual youths. According to a 2013 report by the Ministry of Gender Equality, about 12.2% of youths have left their homes more than once, and 61.3% were due to conflicts with the family.

Dding Dong believes that many of these runaways are LGBT youths who felt rejected for their sexual orientation or identity by their parents and community. A 2007 study by the National Youth policy institute claims that 5.8% of youths reported that they have inclinations towards individuals of the same sex.

LGBT youths also experience violence and hatred from their peers. A 2012 Children’s Civil Rights Survey indicated that although 43% of youths claimed that it’s possible for them to be friends with an LGBT person, 28.8% of youths reported that they would befriend an LGBT peer.

At school, 51.5% of LGBT students reported experiencing verbal abuse, and 20% of the attacks involved physical violence either directly, sometimes with a weapon, or indirectly through their personal belongings (Korea Institute for Youth Development, 2006). Furthermore, a 2006 report by the Korea Institute for Youth Development indicated that 77.4% of LGBT youths have thought of suicide and 47.4% have attempted suicide.

The ultimate goal of Dding Dong is to develop a self-sustaining long-term shelter which will assist homeless LGBT teens make their way toward independence in Korea. The program doesn’t attempt to “cure” or change the way youths view their sexual orientation or identity; it attempts to build self-worth and help embrace who they are.

The program provides consultation for dealing with friends, family members, law, medical needs, and religion; treatment for trauma, stress, depression, or anger; and education for human rights and LGBT studies. The program welcomes the support of anyone who is interested in supporting LGBT rights for youths. Visit their website (Korean, English) or their Facebook page to learn more about their program, opportunities to volunteer, or donate.

For more information on LGBTQ in Korea, check out our articles on “Being Gay In Korea: LGBTQ Life In Modern Day South Korea” and “Gay Dating Apps in Korea“.