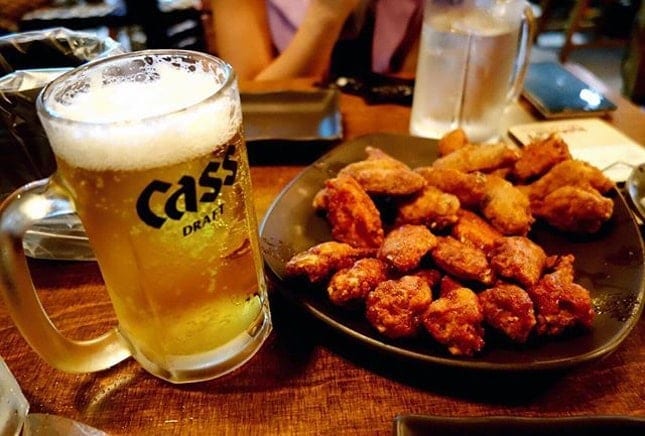 Korean Fried Chicken is a huge phenomenon. It is perhaps the most competitive business in the food industry in South Korea.

In 2016, one out of every four franchises were chicken restaurants. In 2017, roughly eight chicken hofs closed for every eleven that opened. The Korean fried chicken market is so competitive that the business is often referred to as a battle of life or death, wherein owners eke by on razor-thin margins, constantly trying to tweak recipes and prices to boost traffic. These are the statistics of a fully developed market, indicative of a story 60 years in the making, of how Korea made fried chicken its own.

The Beginnings of Korean Fried Chicken

Traditional cuisine aside, Korean fried chicken got its start here post-1950. U.S. troops in Osan, Seoul, and Pyeongtaek, who had to celebrate Thanksgiving with chicken instead of turkey, fried and shared with fellow Korean troops. A Korean tank driver called it “a taste of heaven,” a sentiment most Koreans would come to agree with.

But taste alone does not explain fried chicken’s rise to prominence. To understand how Korean fried chicken came to be referred to honorifically as “ 치느님” (Chi-neu-nim: Sir Chicken), you have to understand a few things about the culture and post-war economic development.

The Rising Tiger and Rotisserie Chicken

In the 1960s, Korea was struggling to develop economically. The average household income was minuscule and chicken was expensive, so no one was going out for chimaek (“chi” from chicken, “maek” from maekju, the Korean word for beer). Around this time, the arrival of the rotisserie oven created the first foothold for chicken in the cultural conscience.

Korea’s first rotisserie chicken restaurant, Myeong-dong Yeongyang Center (명동영양센타), opened in 1960, and although chicken was still not cheap, it helped to further chicken’s growing reputation. The 1960s also saw the advent of “yellow bag chicken (노란 봉투 통닭).” On their paydays, fathers brought home rotisserie chicken in a yellow bag to share with their families. It is important to note that even at this early stage, “chicken,” in contrast to traditional Korean chicken soups and stews, was not considered a meal. It was an indulgence, a once-a-month luxury snack.

Then at the beginning of the 1970s household income began to take off. As “The Miracle on the Han River” unfolded, a cheap cooking oil appeared on the market just as domestic chicken production began to ramp up. The nexus of decreased cost and an increase in disposable income led directly to more chicken consumption for the average Korean.

Trends come and go quickly in Korea, and by the 1980s fried quickly eclipsed rotisserie as the preferred style of chicken. In 1984, Doosan brought Kentucky Fried Chicken to the peninsula, a kind of fried chicken with a thicker breading that exposed Koreans to yet more variety. However, it wasn’t until the late 1980’s that chicken and chicken hofs in their current form started to appear.

Any conversation about Korean fried chicken is incomplete without a discussion of alcohol. Although Koreans do eat it with non-alcoholic beverages, chicken is mainly regarded as drinking food, or anju (안주). The mere existence of such a word says a lot about how important food is to the drinking culture here. Most Korean drinking establishments won’t let you sit down without ordering anju. Food is essential to the drinking experience, and there is a long list of common pairings: Korean pancakes and makgeolli, soju and samgyeopsal, sake and soup, dong-dong ju and… you get the point.

Chicken fits the profile of a drinking food to a tee. It’s greasy, crunchy, salty, messy, and is likely the best friend beer ever had. This particular alcohol and anju pairing helped the modern chicken hof root itself firmly in the drinking culture in the 1980s, while steadily increasing economic prosperity ushered in the era of franchise chains of all kinds. The Korean chain Mexican Chicken (originally Kyesung Tongdak) opened its doors in 1985, followed closely by the likes of Pelicana Chicken (1986), Cheogatjib Yangnyeom Chicken (1988), and Mexicana (1989), all of which are still around today.

No less important than drinking culture and the rise of the chain is the creation of “yangnyeom (양념)” chicken. Yangnyeom translates to seasoning, but when it comes to chicken it means the sweet and spicy red sauce that makes Korean fried chicken so distinct. It is so popular that the issue of who created it ended up in court.

But even yangnyeom chicken was only the beginning. The 1990s were a coming-out party for Korean chain stores, and with Korea’s growing appetite for beer and chicken, new franchises sprang up, chains like KyoChon (1991), BBQ (1995), Ne Ne Chicken (1999), and with it a host of new varieties that began to push the limits of what fried chicken could be.

KyoChon popularized soy fried chicken, which is still their top menu item. In the early 2000s, Koreans were introduced to garlic chicken and green onion chicken. By then fried chicken had expanded its presence in the drinking culture, elevating competition and innovation to new heights, to the point that now almost any flavor of fried chicken can be found somewhere in Korea: Thai fried chicken, carbonara fried chicken, and curried fried chicken, just to name a few.

The continually rising demand drove the chicken market into a fever pitch, and the nationwide number of chicken restaurants jumped to an astounding 36,000 by 2017, which is more than the number of McDonald’s locations in the entire world.

The Future of Korean Fried Chicken

Fried chicken is likely here to stay. Brands like KyoChon and Bonchon have spread outside Korean borders and taken root in places like the United States, Cambodia, and the Philippines. The rest of the world seems to be catching on, and it might be that the future of Korean fried chicken is no longer in Korea’s hands.

However, given its nature as a nightlife food, we’re not likely to see an end to Korean fried chicken’s story here on the peninsula, but rather a continued evolution and refinement of the concept. The cutthroat nature of the industry all but guarantees that chicken hof owners will continue to cook up new takes on old fried chicken recipes and create brand new ones in an effort to attract business.

It is indeed a difficult business to survive in, but given the special place fried chicken has in the hearts of Koreans, no one appears to be backing out of the fight.

If we made you crave chicken, here’s a list of 10 Korean Fried chicken franchises you can order from!

What is your favorite type of fried chicken? Let us know in the comments!