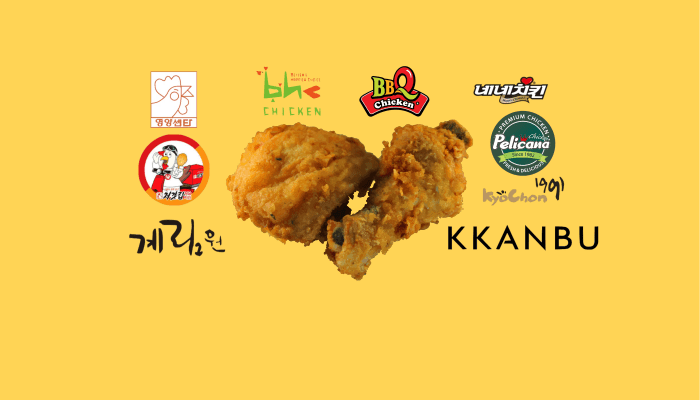 Fried chicken, commonly known as just “chicken” in South Korea, is one of the most popular dishes in the country.

In fact, the popularity of Korean chicken is so widespread that fried chicken shops outnumber Subway and McDonald’s stores worldwide. KB Financial Group Economic Institute reports that there are around 87,000 chicken stores in Korea as of February 2019, while Subway has 43,000 and McDonalds 37,000 worldwide.

One thing is for sure: Korean fried chicken is not your average Kentucky Fried Chicken. There are so many innovative flavors and ways of cooking chicken that all are too hard to refuse. Recently, there have been many mukbangs (online broadcasts focused on eating) where Youtubers and other video content producers eat newer and innovative recipes like “Prinkle”, “Snow Wings”, and more. Read below for the most popular Korean chicken joints and what to order!

Warning! This article might make you hungry. Sign up for Shuttle using 10 Mag’s link and get 4,000 won off your first order.

BHC first started in 1997 and is known for making innovative and successful recipes. They pioneered several different flavors of chicken, such as “Curry Queen”, which has a unique curry seasoning, “Chireka” with a flavorful garlic scent, “Boombastic” which mixed Korean spicy red chili paste with BBQ sauce, and most famously: the “Prinkle” (뿌링클)  and “Macho King” (맛초킹) .

If you are ordering from BHC, we recommend trying the Prinkle or Macho King. The Prinkle has been in constant popularity in the Korean food industry for its addictive cheesy powder and sauce, while the Macho King is the perfect combination of sweet, savory, and spicy with its soy-based sauce and hot peppers. If you can do spicy, the Prinkle also comes in a spicy cheese option.

And if you thought that BHC was only good at making chicken, try ordering their Prink-Cheeseballs (뿌링 치즈볼) on the side which are as popular as the chicken. These are not your average cheese balls — they come in doughnut-hole shapes with the outside layer crispy and the inside filled with melted cheese.

This chicken franchise is known for making their packaging look like pizza boxes, delivering square-shaped boxes filled with fried chicken. Boasting its use of chicken raised in the country, its highlight recipes are the “Snow Wing” chicken (스노우윙) and “Oriental Pa-dak” (오리엔탈 파닭), which is chicken with oriental sauce and shaved scallions.

The Snow Wing is a competitor to BHC’s Prinkle, which has a cheesy powder but has a different flavor distinct from its competitor.

Another common chicken dish is “Pa-dak,” which is chicken topped with shaved scallions. A lot of people like the combination, as the oil and crispiness of the chicken compliments with the fresh and crunchy scallions on top. Nene Chicken is one of the best chicken joints to serve “pa-dak”, with its Oriental Pa-dak menu.

Kyochon Chicken is definitely one of the more popular chicken franchises, with over 1000 different locations all over the country. It’s best known for its Garlic-Soy Chicken, a recipe that’s still a mystery to other competitors that want to imitate it.

There has also been a recent surge in popularity with their Honey Combo and Red Combo recipes. The Combo series are fried, and then richly coated with sweet honey sauce (spicy honey sauce for the Red Combo) giving it an irresistible chewy texture to the food.

Eat like a famous Mukbang Youtuber by combining the Honey Combo with “Yeopdduk’” Tteokbokki (some of the spiciest rice cakes in the country!).

Goobne was the first chicken joint to successfully market a “healthier” way of enjoying chicken, by highlighting the fact that they oven-roast their chicken instead of frying it. It is also known to be the brand that celebrities like Girls Generation and Exo endorse through ads.

All of their recipes are pretty popular, but many people choose from the Original, Crispy Pepper, Volcano, and Galbi Cheonwang. The Crispy Pepper is known for its spicy and crunchy taste, the Volcano is like what its name suggests – it describes that the spicy hot sauce is hot as “lava coming out of a volcano,” and the Galbi Cheonwang is known for tasting like the galbi seasoning we are familiar with in KBBQ.

BBQ Chicken is also one of the most well-known chicken brands. Its most popular menu is unquestionably the Golden Olive Chicken, which is known for its use of virgin olive oil.

One of the oldest chicken franchises in South Korea, Pelicana had a role in bringing the famous, spicy sauce “yangnyeom” chicken to the mainstream market. It was also one of the first franchises to start delivery service and has contributed to many foundations of the chicken-eating culture in Korea.

Kkanbu Chicken is a relatively newer brand, but a favorite to many people. This chain started in Yongin City, Gyeonggi-do, but you can find many of its stores in Seoul.

Their “Garlic Oven-Roast” is the most popular on the list. Roasted in an electric oven, this tasty chicken is finished with minced and seasoned garlic all over its plate, adding a lot of flavor to it. The “Crispy Chicken” just tastes like its name, and the combination of crispy and juicy is hard to describe unless you try it. The “Six Pack” is also a favorite, which is known for its large pieces and extra crunchiness. For the side menu, the Spicy Fries and Kkanbu Golbaengi are the usual go-tos.

Gyerimwon brought together two meals enjoyed by Koreans: chicken and nurungji, or scorched rice to create the Nurungji Tong-dak. The chicken is first roasted in an electric oven grill, taking out excess oil and giving the chicken a crispy texture. Then, the chicken is placed on top of a plate of savory, crunchy and chewy scorched rice. They have other innovative menus like the Spicy Buldak (“fire-chicken”), Cheese Corndak (“corn-chicken”), and the Corndak (chicken topped with sweet corn).

Order the Supreme Yangnyeom Chicken, which also is drizzled with a “mysterious” white sauce that makes the flavor even more addicting.

This place is the father of roasted chicken in South Korea. You can visit the birthplace of Korean electric oven-roasted chicken in Myeongdong, where the original Yeongyang Center store was founded in 1960. Order the Rotisserie Chicken (Jeongi-gui Tongdak), and pair it with the white pickled radish they give you on the side.

For healthy eaters, Yeongyang Center’s Samgyetang is also famous. This traditional Korean soup is brewed and filled with many nutritious ingredients that will help you fight any weather and any sickness in Korea.