The 10 Most Historically Beautiful Castles In Korea 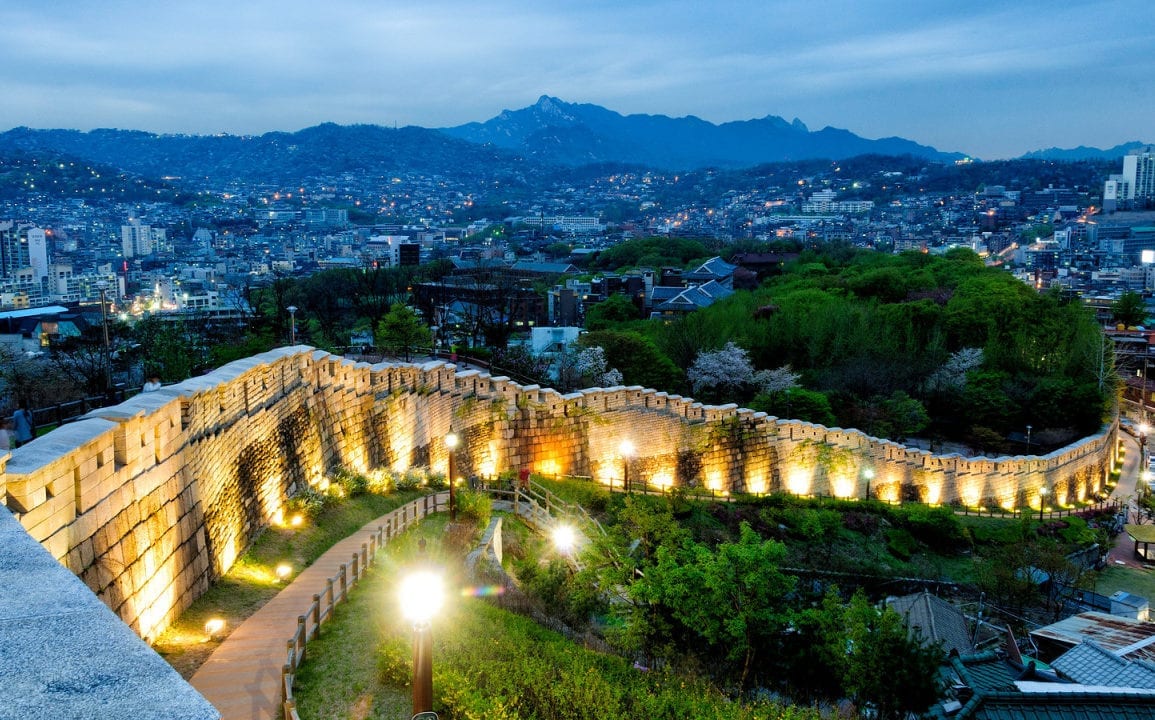 At the mention of castles in Korea, images of pink-walled, crenellated love motels may spring to mind. Towering beside expressways and bus stations, and with names like Prince Hotel, these are not the representative castles of South Korea.

While feudal castles still stand in Japan, what remain of Korea’s ancient defenses are city walls and the fortifications of craggy mountain citadels. One of the first stops for anyone interested in Korean architecture and history is Hwaseong Fortress (화성) in Suwon.

But for those who want to continue exploring, Korea contains hundreds of castle and fortress remains, ranging from the popular, well-restored, and accessible, to the remote, overgrown, and crumbling.

Gongju Fortress was built after the capital of the Baekje kingdom was moved to Gongju. Encircling a hill along the Geum River, the fortress has been tastefully restored, and one can’t help but feel a deep historical pull while strolling the area.

Translating roughly as Golden Citadel, Geumseong Fortress near Damyang-gun (담양군) is not only a complex, ingenious , but also makes for one of the most breathtaking, heart-pounding short-course hikes in South Korea.

Budget half a day to complete the full circuit. Like many of Korea’s mountain castles, Geumseong Fortress is protected by water, in this case the serpentine Damyang Lake, below the west section. Exercise caution, as there are no guardrails.

Damyang-gun (담양군) can be reached from Gwangju (광주) by bus (W2,200). Local bus #303 from Damyang bus station makes the trip to Geumseong Fortress (disembark at Damyang Resort Spa and Hotel).

Ganghwa Fortress was constructed shortly after the Goryeo Dynasty capital was shifted to the island in 1232, in response to the Mongol invasions.

The south gate is an easy stroll from the bus station, and the west and east gates are also accessible, but a taxi may be needed to reach the north gate, up a steep, windy road.

Munsu Fortress, a U-shaped wall defending the waterway across from Ganghwa Island, was built in the Joseon era. The fortress played a part in Korea’s turbulent opening-up period as the site of a fierce but unsuccessful battle against French troops in 1866. Choose a clear day to hike up along the wall for a view of North Korea. Note that the section from the south gate to the ridge is currently closed.

The remote Gomo Castle is located off the highway between Mungyeong City (문경시) and Mungyeong Town (문경 마을).

The south gate and its adjoining walls have been redone, while the west gate remains disheveled, offering a nice contrast. Beyond these gates, some bushwhacking is required. With a bit of sweat though, you’ll find a few turrets and foxholes, and you may even scare up a few pheasants.

The total course takes around 1.5 hours. To get there from Mungyeong City, exit the bus station and turn right. From here, board any bus bound to Mungyeong Town from the bus stop across the intersection.

At 17.3 km in circumference, Busan’s Geumjeong Mountain Fortress is one of the longest in Korea. The walled fortress was seriously reconstructed in 1703, disassembled during the Japanese occupation, and reconstructed once again from 1972-89. Though the satisfaction of seeing ancient rockwork may be lacking here, there are memorable watchtowers and tremendous views.

To take the cable car up to the south gate, proceed from exit 1 of Oncheonjang Station (온천장역).

The site of a brave defense by General Song Mun-ju against the Mongols in 1232, and by General Pyeon I-chang against the Japanese in 1592, Jukju Castle near Anseong (안성) has now been invaded and captured by red ivy and dragonflies.

Rebuilt sections have been carefully interspersed with older sections. (To explore these older sections, scout about the north end.) The old growth pine forest within the walls enriches the sense of solitude and desolation of this castle.

Up to two hours are needed to walk the inner circuit. Anseong is one hour from Seoul’s Express Bus Terminal (W5,400). From the bus shelter opposite Anseong Bus Station (안성버스정류장), catch #370 or #370-1 to Juksan (죽산); next, find a taxi driver or catch village bus #10-1 bound for Baek Hermitage (백산장).

Built along the meandering Nam River, Jinju Castle has a park-like atmosphere. Jinju Museum is located on the castle grounds, as well as Hoguk Temple (호국사) and numerous pavilions, shrines to the thousands who died here during the Imjin War, memorials to heroic defenders, antique Korean guns, and a shrine to the patriotic kisaeng, Non Gae.

Heavy reconstruction has taken place (mostly during the sixties). While the castle is undeniably pleasant, it’s certainly the most revamped of all Korean fortresses.

Bus #16 runs from the Jinju Express Bus Terminal to within walking distance of the main entrance (disembark once you’ve crossed the river).

The construction of Three-Year Fortress in Boeun-gun (보은군), then at the edge of the Silla Kingdom, began in 470, and took only three years to complete. Some sections of the wall are crumbling, some fully engulfed by vegetation, and others miraculously intact, while the west gate stretch has been grandly restored.

Boeun-gun is deep in the the Chungcheong countryside, though there are buses (via Chungju) from Seoul’s East Bus Terminal. Upon arrival, hitch a taxi for W3,500 or simply walk toward the gleaming white wall on the hill.

Most visitors to Buyeo-gun (the final capital of the Baekje Kingdom) tour the heavily reconstructed Buso Fortress (부소산성) near the city center to see Nakhwaam (낙화암), the so-called suicide cliff. This is where the women of Baekje jumped to their death when the nation fell to the army of Shilla.

Farther afield from the city is the evocative Seongheung Fortress, perched on a hilltop and offering stirring views of the Geum River landscape. Reconstructed sections of the walls stretch from the giant zelkova tree at the south gate, but beyond these, little remains of the original wall.

To reach Seongheung Fortress, catch the village bus (W1,500) to Imcheon from the bus stand across from Buyeo Intercity Bus Terminal.

THE GREAT WALL OF KOREA

King Jeongjo may have failed to relocate the Korean capital to Suwon, but he did succeed in building Hwaseong, an impressive fortress and major tourist site that was selected as a UNESCO World Cultural Heritage site in 1997. Built in honor of Jeongjo’s murdered father, Hwaseong Castle took 700,000 man-hours to build, stretches nearly six kilometers, and filled ten volumes detailing its construction.

These records came in handy during repairs in the 70’s, which restored the fortress, severely damaged during the Korean War, to its original glory. From Hwaseong Haengung, the detached palace that served as King Jeongjo’s Suwon residence, to a myriad of architectural features including signal beacons and secret gates, the castle is a treasure trove for history and building buffs.

Hikers will enjoy the vigorous walk along the wall, which winds up and down hills and through the middle of the city. There’s even an archery range and a shuttle masquerading as a dragon that can whisk you off to different points of interest.

Travel an hour south of Seoul on subway line 1 to Suwon Stn., come out exit 5 or 6 and cross the street. From here, it’s possible to walk the 1.5km to the impressive gate Paldalmun, though almost any bus will take you right there (including #7, 7-2, 11, 13 and many more).

THE CITY WALLS OF SEOUL

As a long-time capital city, Seoul is full of remnants of the walls that once encircled it. To reach Namsan’s (남산) ramparts, which continue all the way up to the N Seoul Tower, start from exit 6 of Dongguk University Stn. (line 3) and walk just past the National Theater. City bus #420 stops right next to the National Theater.

There are numerous rebuilt gates along the winding Bukhansan Fortress (북한산성). Take city bus #110A, #143, or #162 to the last stop (마지막 역) and hike up to the ridge. Portions of the fortress can also be found on Inwangsan (인왕산) and Bugaksan (북악산).

A trip to Namhan Fortress (남한산성) remains one of the most rewarding excursions in the Seoul area. Start from the eponymous station (Namhansanseong Stn., line 8, ex. 1 or 4), or take bus #30, #30-1, or #333 directly to the entrance.

Achasan Fortress (아차산성) can easily be reached from Acha Mountain Stn. (line 5) or Gwangnaru Stn. (line 5), both from exits 1 or 2.