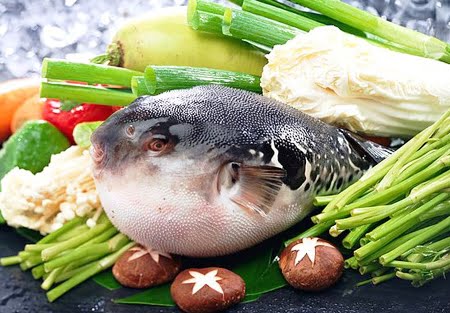 The poisonous puffer fish, or bogeo (복어) in Korean, is regarded as one of the more dangerous delicacies to be eaten, but the experience today is a much tamer affair.

“Poison, poison, tasty fish.” I recalled the words from an iconic Simpsons episode in which Homer eats poisonous puffer fish. A dramatic cartoon chef slices the fish according to a comical diagram, “removing” the highly poisonous sections. A similar scene was in my mind the night I went to try bogeo (복어), the potentially poisonous puffer fish more popularly known to many Westerners by its Japanese name “fugu.” I imagined solemn knife-donning chefs in tall hats, sweating anxiously as brave foreigners tasted a slice of their wares.

Korean bogeo, however, proved not to be so dramatic. In Jeonju’s Ijo Bokchip (이조 복집), a restaurant recommended by my Korean acquaintances, chuckling, curly-haired ajummas replaced the image of knife-wielding chefs, and chunks of fish appeared innocuously in piping hot stews. “Is it safe?” I asked in choppy Korean. Twice. Both times, the aging server answered with only a hearty belly laugh.

Puffer fish soup (called “bokguk,” 복국) made its way to our table – a hot, brothy soup full of unassuming bean sprouts and green onions. Substantial chunks of fish poked from the surface, revealing eyes and scales. The fish meat itself was neither particularly fishy nor noticeably flavorful, but optional spicy sauce (which can be pre-added by the chef, if desired) helped to combat this. Not thrilling – just filling.

Other popular forms of bogeo included a puffer fish bulgogi smothered in spicy sauce (coming in at a much higher price than our W15,000 shared soups).

Meanwhile, each table had its most intriguing taste of the fish in the form of a side dish of puffer fish skin called bokeo kkeopjil (복어 껍질). This delicacy appeared in thin slivers, each piece comprising two thin layers of gelatinous fat with what felt like a scrubbing sponge in the middle. Again, the taste was unremarkable, but in this case, the texture was surprising and refreshing, unique enough to taste again and again. And as before, a tangy red sauce appeared alongside to kick up the flavor.

Everything else about this “death-defying experience” seemed rather ordinary. Kimchi and other familiar side dishes graced our low-set table alongside the standard bottles of Hite and soju. No signing of liability forms, no nervous watching of chefs. The reason for this lack of panic? Farmers are now able to breed puffer fish without poison in the glands or skin. Safe taste, less thrilling. Even in the case of naturally occurring bogeo, Koreans were quick to point out that trained chefs in Japan can carefully slice the fish and send the safe parts frozen to Korea.

All in all, though the experience lacks the flare one might imagine, it offers a taste of exotic textures and an item to check off on your traveling bucket list.

Originating in Busan in 1971, the ttukbaegi bokguk (puffer fish stew) here has 41 years of history behind it. The stew tastes light and clean and is also said to be effective at relieving hangovers as it has lot of bean sprouts in it. Don’t forget to have some baked sweet potatoes for dessert.

The special course meals’ prices range from W60,000 to W95,000 (per person), but with these sets you get to experience bogeo in all kinds of forms, from classic sashimi, to porridge, fried up, bulgogi, side dishes and others . You can also order a normal 1-person set for W15,000 to W55,000, which includes a main puffer fish dish, as well as fried puffer fish and puffer fish porridge.

This Daegu restaurant is best known for bokbulgogi, puffer fish marinated with red pepper paste. Another specialty here is the delicious fried rice served with bokbulgogi sauce and surrounded by a circle of steamed eggs. For a deluxe experience, try the course meals (W30,000 – W190,000).