10 Things You Didn’t Know Are Illegal in Korea

South Korea is full of surprises, here are 10 things you’ll want to watch out for if you don’t want to do something illegal!

Whilst having a tattoo is not illegal in Korea – though may ban you from entering some jjimjilbangs! – a quirk in Korean law means that most tattoos are done illegally. How so? Well, Korean law requires that anyone tattooing by a licensed medical doctor. However, the growing ranks of non-medically trained tattoo artists have seen little law enforcement in recent times and tattoos are increasing in popularity in Korea every day.

Laws passed over the last few years have made it increasingly difficult to smoke in public areas. With a total crackdown on bars, cafes, and restaurants, as well as many other indoor areas, smokers have been turfed out onto the streets where they’ve been met with further bans. These restrictions cover numerous public spaces such as the area around subway station exits, designated streets, shops, and several tourist areas. If you’re thinking of lighting up but you’re not sure, watch out – fines are hefty and well-enforced!

While not strictly legal, the use of dog meat for consumption lies in a legal gray zone. Most interpretations of the law make it illegal but no one seems to have told the numerous restaurants that still serve it. While the government hasn’t shown any interest in outright banning the consumption of dog meat, recent allegations regarding inhumane practices in harvesting dog meat have been spreading like wildfire.

Government lobbying is completely illegal in Korea which should allow for the government to operate freely for business interests. In theory, this means that any and all politicians are banned from receiving funds from corporations or outside organizations; realistically, companies have found ways around it by offering politicians jobs after leaving office. As such, any attempt at lobbying can be simply categorized as bribery. 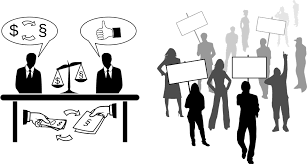 A vaguely worded law was passed that made indecent exposure a fine-able offense. Due to the law’s lack of clarity, many have been drawing comparisons to a similar law drafted in the 1970s (and later revoked) that banned mini-skirts. Many concerns stem from the fact that the previous law was enacted during the dictatorship of impeached former president Park Geun-hye’s father, Park Chung-hee.

Believe it or not, that kindly old lady selling rice cakes and soup on the street is breaking the law. In interviews, politicians have been quoted saying that up to “24%” of the nation’s GDP is lost through these vendors. Since 2011, it has been illegal to operate a street stall and recent crackdowns have shown that the government has no plans to change their minds. However, since 2019 the street vendors are able to run their businesses. As long as they get a license that they have to renew every year.

Gambling in Korea is heavily regulated to the point where it is essentially illegal for Korean nationals both on Korean soil, as well as when traveling overseas. The only casino in Korea at which it is legal for Korean citizens to gamble is Gangwon Land. A small cramped casino located out in the middle of nowhere so that it would discourage gamblers; it is filled to capacity every night. Gambling for foreigners, on the other hand, is completely legal and encouraged (have a look at this list of casinos in Seoul). Lucky us.

Online gaming is allowed under special conditions. For example, the conditions being that it takes place between the hours of 12 am and 6 am and the gamer is under the age of 16. In a move that brought protests from a slew of development companies, the South Korean government passed the “Cinderella Law”. Internet censorship prevents accounts for children under the age of 16 from connecting to Korean gaming servers.

The production, consumption, or distribution of pornography in all its forms from magazines to internet videos is completely illegal in South Korea. Originally conceived as a method of reducing sexual crimes, the law is still in full effect today. While the effectiveness of such a measure can’t be determined, it does result in less bandwidth and trouble for internet providers in Korea. Certain internet sites are shielded. Don’t act like you didn’t already know.

After-school programs have been around in Korea for decades as institutions of learning supplementing and sometimes replacing regular schooling programs. They are, arguably, one aspect of the educational culture which allows Korea to boast a 93% high school graduation rate. Unfortunately, the other side of the coin includes the hugely public student suicides that are shown on television at the end of the school year. To curb over-studying, the Korean government has essentially cracked down on late-night studying by forcing after-school programs to close by 10 pm. With the latest crackdowns on studying, who knows what children will do at night without porn and video games to save them.

Up until 2015, sex with someone other than your spouse was punishable by up to two years in prison. Any unmarried individuals who knowingly involved themselves in sexual relations with a married party were also guilty under Korean law. International Schools in Seoul: Top 9 in 2022

However, a landmark case in early 2015 saw the law overturned, with presiding justice Park Han-Chul declaring that “Even if adultery should be condemned as immoral, state power should not intervene in individuals’ private lives.”

If you found this article helpful, leave a comment below! You can also check out our article on “7 Korean Immigration Laws That You May Be Breaking Right Now!” and stay safe.