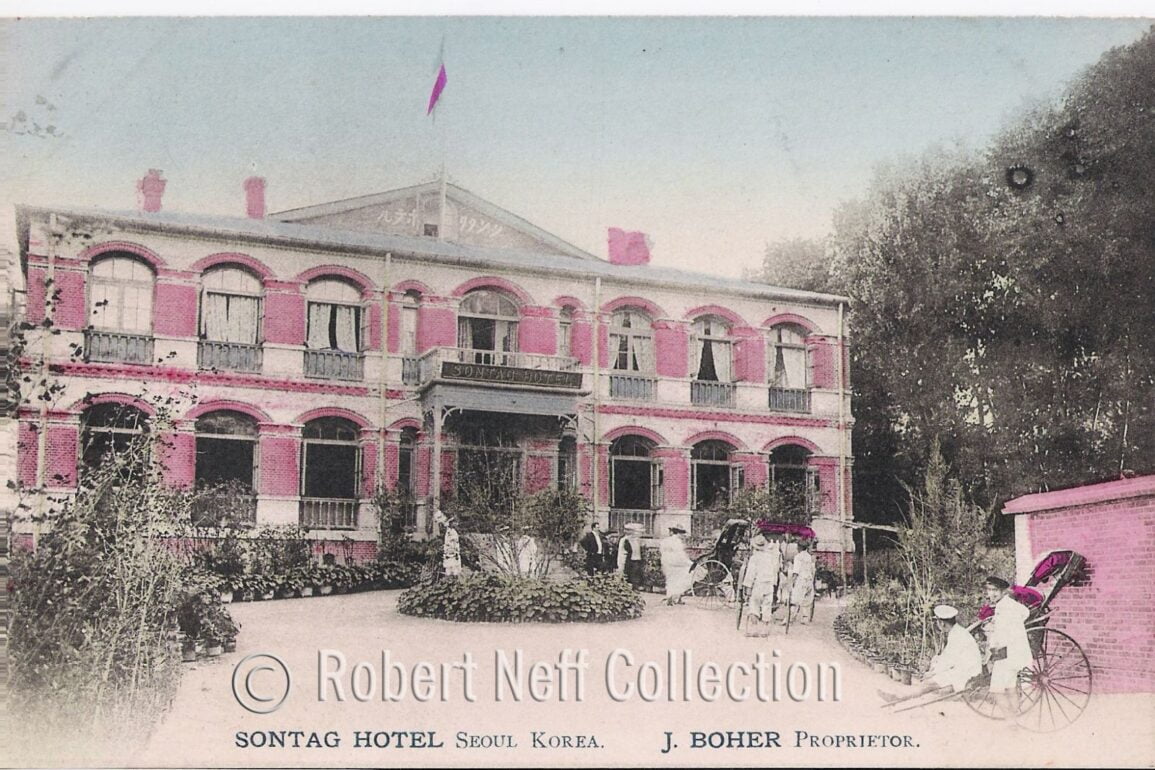 Modern Seoul is filled with hotels and getting a room is generally not much of a problem, but it wasn’t always that way. The Luxury Hotels of Seoul in the early 1900s were quite rare. The first hotel to cater to Westerners was established in 1884 near the Japanese legation. At first, the hotel was used to house sailors from the American warship U.S.S. Trenton. Following their departure, it was for a short time the only place – other than the foreign legations – that visitors from overseas could find accommodations, albeit sparse at best.

Horace Allen, a missionary at the time, described his stay at the hotel as “a new experience” in which he slept on a board with his shoes as pillows and his shawl as a blanket. “I pay $1.50 a day [a very princely sum] at my hotel,” he declared, “but get nothing to eat unless I furnish it and no heat.” A later guest apparently had it slightly better. The room was clean and furnished with a small table, two chairs and a lamp, but no bed nor bedding.

The guest was served “four eggs nearly raw, four persimmons, a bottle of beer and some tea.” Later he was given “a beef-steak, horrid-looking, tough and badly cooked” that he refused to eat and sent away. The hotel soon failed – not due to its poor service but because of a wave of political unrest and anti-foreign sentiment.

The next hotel in the capital appears to have been the Seoul Hotel, established in 1897. This two-story inn was owned and operated by an Italian named Felix Bijno. It was located “within the Imperial Palace grounds,” boasted “spacious, commodious and well-fitted bedrooms,” and served “cuisine of the best French style.”

Allen, now the U.S. minister of Korea, described it as providing “all the comfort that an accommodating Italian and his wife can furnish,” with rooms going for $2 a night. Despite its apparent success – including catering for a huge Korean government event – the Seoul Hotel was reportedly sold to a Frenchman in late 1898 or early 1899 and its name changed to the French Hotel.

Soon there were several hotels in Seoul, with the most popular being Sontag Hotel – named after its founder, Antoinette Sontag. Sontag was a German national who arrived in Seoul in 1887 to head the household of the Russian Minister to Korea, Carl Waeber, who was her brother-in-law.

She did a commendable job and apparently gained the eye of King – later, Emperor – Kojong while he was residing at the Russian legation during the turbulent period following the murder of Queen Min. The Korean monarch later granted Sontag the property and furnished her with the money to establish her hotel, which arguably became the best hotel in Seoul.

Sontag’s relationship with the Korean monarch may have also contributed to her selling the hotel and departing Korea. There were allegations that secret anti-Japanese and pro-Russian meetings occurred on the premises and served as a conduit for money to finance Korea’s independence movements. One Japanese official declared that “the secret room of the Sontag Hotel was a consultation center for diplomatic conspiracies.”

Sontag sold her hotel to J. Boher, who kept the hotel’s name. In 1911, the hotel was described as “one of the best known and most popular in Korea (formerly a private hotel of the Imperial Korean Household), with electric lights, free baths, a reading-room well stocked with papers and magazines from many lands.” The grounds were beautifully landscaped with flowers and trees.

During the spring and summer, the air was filled with the cries, songs, and honks of magpies, cuckoos, geese, cockerels, and smaller birds. Even more unique were the grunting and squealing of young bears that had been captured and chained to trees by the hotel owner.

Sontag Hotel was eventually sold and dismantled. A new prominent hotel was built by the Japanese and called the Chosen Hotel. This Hotel celebrated 100 years of adversary in 2014. But as Andrei Lankov, a popular Korean historian, likes to say – that is a story for another time.

If you are interested in Korean History, you can check our article about the 5 Most Interesting Korean kings!