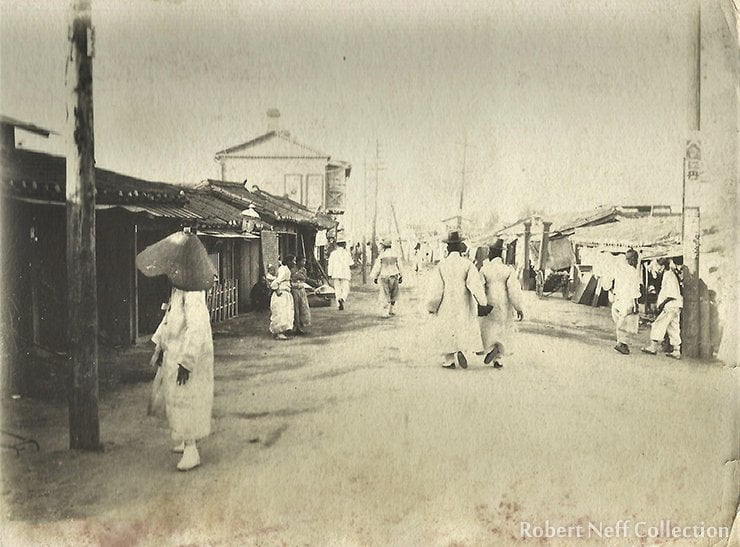 Prior to the marvels of the computer and its email service or the smartphone and its Kakao program, snail mail was the only economical way that foreigners in Korea could keep in touch with their families back home. Snail mail, as the name implies, was slow and letters to and from the United States frequently took a week or more to arrive. But if this seems bad, imagine how it was in the Joseon era.

The first modern postal services in Korea were operated by the Japanese and located at open ports. In Seoul, the mail was delivered to the Japanese post office and then collected by an American and taken to the legation, where a certain flag was flown notifying the Americans that the mail had arrived.

Sometimes the mail was merely placed in a sack and sent around to each house – “each person helping himself.” Of course, this was far from perfect and letters and postcards were occasionally lost. During the late 1880s, one devious American allegedly took letters from American advisors to the Korean government and printed the contents in newspapers in Hong Kong.

As early as 1884 (just before Korea established its own short-lived postal service, which survived less than three weeks), there were charges of mail tampering and theft. Even the American legation was not exempt from having its mail stolen.

In December 1891, Helen Heard, the daughter of Augustine Heard, the American Minister to Korea, wrote to her sister that she was terribly afraid that her letter would fall into the wrong hands because the “mail has already been stolen several times this autumn.”

In 1895, Sallie Sill, the wife of the American Minister to Korea, also complained of packages being stolen. She explained to her son, “The shirts you sent your father from Yokohama never reached him at all, I presume either some unusually large Japanese or Korean in foreign dress is getting the benefit of them.” The American Minister was a fairly large man.

Because of the “continued complaints owing to the unaccountable disappearance of letters, even though registered”, at the Japanese Post Office in Seoul, many Americans gathered their mail together and then sent it by a special postal service courier to the American-owned Townsend & Co. in Jemulpo (Incheon). It cost a little bit more but many felt the costs outweighed the risks. The Americans were not alone, as other legations did the same.

On July 23, 1895, Korea began its domestic postal service. Letters were picked up and delivered in Seoul at seven in the morning and five in the evening. Mail to Jemulpo was sent at 9 am and arrived that evening at 5 pm. The Korean postal service did a fairly good job of delivering the mail and was soon extended to Suwon and Songdo (Kaesong in North Korea).

But, like any bureaucracy, it was over-staffed. There were four Japanese advisors who were paid 100, 80, 60 and 30 yen a month, twelve Koreans – who did not deliver mail – paid 10-12 yen, and thirteen mail carriers who earned 7 yen. The mail carriers to Songdo and Suwon were paid 15 yen because of the distance they were required to walk.

Korean postal service carriers had a lot of responsibility. Tampering with the mail would earn them huge fines, public lashings (anywhere from ten to 100 strokes) and jail sentences ranging from a month to three years in prison (Korean prisons were notoriously bad). The carriers were also at risk from banditry and acts of violence. Several were robbed and even killed. In one district, the local magistrate had angered the people so severely that they decided to take it out on the post office – they destroyed it. The postmaster got away, but the mail did not.

If you enjoyed this article about Korea’s old postal service, make sure to check out History: When Tigers Roamed the Korean Mines.