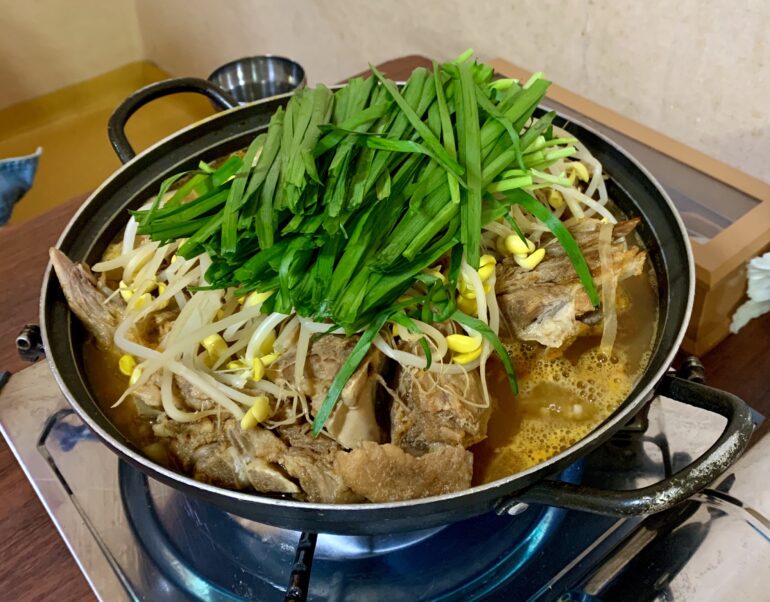 While the area surrounding Gyeongbokgung Palace houses unique museums, eclectic coffee shops, and a surplus of hanbok rentals that monopolize most travelers’ attention, the neighborhood’s real gems (like gamjatang, as you will see) are left to the locals or those who fancy a bit of wandering. The undiscovered nooks and crannies of the district are where the real history reigns.

Discreetly hidden behind exit 7 of Gyeongbokgung Station lies a labyrinth of restaurants, low-key bars, and traditional homes. Sporting the bones of traditional architecture, this neighborhood has some of the finest restaurants in the area, including Halmae Jib (할매집), which serves (dare I say it) the best gamjatang (감자탕) in Jongno-gu, and possibly all of Seoul. This modest neighborhood behind Sajik-ro is one of the last vicinities near the palace that tourism hasn’t consumed, a refuge and sanctuary to locals. And the food reflects just that!

Halmae Jib appropriately translates to “Grandmother’s House” and has earned a spot in the Michelin Guide for four years in a row (2017-2020). As if that isn’t impressive enough, it has also been in operation for 45 years. In 1975, Halmae Jip was founded in Naeja-dong (내자동) by Grandmother Moon Gyeong-Ja. She moved the business to its current location in 2006 and has gained fame in the local community.

The owner, “Grandmother,” still owns and operates the restaurant today. With the restaurant’s open kitchen concept, you can easily see her working away, preparing the food with expert precision, and a little love.

What makes Grandmother Moon Gyeong-Ja’s gamjatang so special? There are a couple components that set this stew apart, but the most obvious is the unique ingredients used. Instead of following in trend and using perilla leaves, Halmae Jip substitutes them for bean sprouts and garlic chives (부추). Like many traditional stews, the dish is served in a large pot, conveniently placed on a portable gas range at the table, allowing for further cooking. If your appetite gets the best of you, don’t worry, you can immediately dig into the pork back-bone, which is served already cooked.

The pork back-bone is the star of the show, with the flavorful, clean broth as a runner-up. The meat is extremely tender and appetizing on its own. However, if you’re a condiment fanatic, there is a sweet and slightly spicy mustard sauce served on the side for dipping. The broth has a distinct taste, which is robust without being overwhelming. The combination of sticky white rice, pork, soybean, and broth makes for the perfect bite.

Halmea Jip specializes in two dishes, gamjatang (감자탕) and jokbal (족발) which are both priced between ₩25,000-30,000. Halmae Jip makes for a hearty lunch after exploring the palace district.

Don’t let the Michelin Guide mention fool you, this restaurant isn’t fancy. Instead the atmosphere is cozy and traditional, exactly what you would expect from a grandmother’s house. If you’re up for an adventure, head back to exit 7 after your delicious meal at Halmae Jib. Here you can find a city bicycle rental stand, conveniently located to the right of the exit. Grab some wheels and head out to see what other hidden gems you can find in the area.

How to Get There

To locate Halmae Jib simply take exit 7 from Gyeongbokgung Station and walk straight for five minutes. It will be located in the neighborhood on your left.