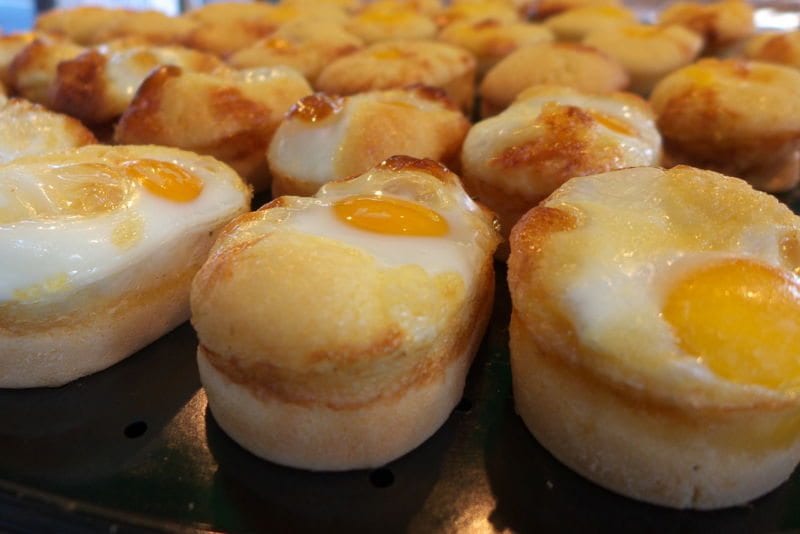 With another change in season, you are probably craving Korean winter street foods, so we’ve compiled a list of such items that have long been popular on the ROK.

This list doesn’t include candy canes or Christmas cookies, but these street foods are perfect to warm you up. Next time hunger strikes, rustle up a couple KRW 1,000 bills, put on your jacket, and find somewhere to enjoy one of the following street treats.

Literally “carp bread”, bungoeppang goldfish-shaped snacks are like the most commonly sold winter snack food in South Korea. Take a bite into this delectable flour pastry stuffed with red bean paste that is grilled to a nice brown.

You won’t be disappointed by the crispy outer layer or the mildly sweet inner filling. A one of the popular Korean winter street foods, you don’t have to worry about it breaking your budget, as both bungeoppang (and the similar ingeoppang) can be bought in schools of three to five for around KRW 2,000.

A close cousin of carp bread, this bread comes in smaller shapes with a chrysanthemum stamped on the top and bottom, with the biggest difference just the shape. They sell in packs of 5 for about KRW 1,000.

Before coming to Korea, the only time I’d ever heard about chestnuts was in Nat King Cole’s song “Chestnuts Roasting on an Open Fire.” In Korea, this classic Christmas carol comes to life. Beginning in the fall, chestnuts are sold, served, and savored both roasted and raw.

On the street, look for the chestnut roaster and a big basket of shelled nuts. You may be surprised to find how tasty and tender the nuts are when roasted (whether or not an open fire is involved). KRW 3,000 will get you a modest-sized bag.

Fried Hotteok is the sweetest of treats on this list, and even Santa himself would find it hard to turn one down if he found it next to a glass of milk. The dough is rolled into a ball, filled with dainties such as honey, brown sugar, chopped peanuts, and cinnamon, and then fried up on the skillet in front of you.

As one of the popular Korean winter street foods, make sure to eat it hot but be careful – the gooey syrup is extremely sticky and has a nasty habit of dripping out of the Hotteok and onto clothing, cameras, and other vulnerable items. Locals have been savoring the sweet winter street food in Korea since the mid-19th century when it was brought by Chinese soldiers marching through Seoul.

Then, it was called Barbarian Bread, but Koreans eventually came to relish it. The affordable price (W1000) may tempt you to keep going after the first one, but try to remember that each Hotteok has about 230 calories in it.

As one of the more healthy Korean winter street foods you can buy for KRW 1,000 or less, Koreans are fond of dropping by convenience stores to pick one of these up from the distinctive cylindrical warmers. All Hoppang may look the same but inside there are a variety of possible fillings including vegetables, curry, pizza, and the ubiquitous red bean.

Compared to Hotteok, Hoppang have not been around that long – only half a century. Shortly after the liberation of Korea from Japanese control wheat began pouring into the country from America.

Koreans took advantage of the cheap wheat and began making Hoppang for the cold months. Pick one up from a convenience store and enjoy a great snack that will keep your hands warm too.

Like banana bread, the name tells you all you need to know: egg, flour, milk, and a bit of sugar, bake it, buy it, try it. It’s like a pancake and egg pocket. The street vendor has a fancy egg bread machine with handy little slots for pouring in the egg bread mix and cooking it till golden brown.

Egg bread servings are pretty small, but for KRW 1,000 – KRW 2,000, they’re filling enough and perfect either for breakfast to go or as a snack on the way home.

Odeng is at its best when it’s skewered on a stick, soaked in broth, and consumed outside on a chilly evening in December. The taste is wholesome and hearty, and its texture comes from the blend of fish and grain that it’s made of.

Odeng is of Japanese origin and the word “odeng” itself comes from the Japanese word “oden.” There’s a Korean word for it too – eomok which some jingoistic Koreans may insist you use, despite the fact that Koreans all use the Japanese name. But no matter what you call it, it makes a great, inexpensive street snack (KRW 1,000 per skewer).

Another popular winter street food in Korea is steamed corn. This delicious-looking corn on the cob that is steamed to perfection is guaranteed to help warm you up on those cold days. Not only does it keep you warm it also makes for a healthy snack as well.

The Korean version of street corn has little to no salt or butter on it and you are also most likely supporting local farming as well when buying. Buy a couple, stick them in your pockets, keep warm, and eat later.

Those big oil drum-looking things with the warmly-dressed ajushi standing next to them are filled with a nice warm fire and sweet potatoes wrapped in tin foil and then roasted to perfection. Koreans put sweet potatoes to use throughout their cuisine, of course, as anyone who has eaten a Korean pizza ought to be familiar with.

But the baked sweet potatoes that go on sale in the colder months are without a doubt the best of the bunch. Look for them near subway stations or schools, where no more than KRW 2,000 will get you two or three.

You need to watch out for this bread and not just because it’s tasty, either. The Korean word “gonggal,” which means “lie,” should give you pause. It looks puffy, fluffy, and full of white delight, but when you actually bite into it, you’ll discover that it’s hollow.

The peanuts and sesame seeds mixed into the batter and the honey inside should still keep you happy. Anyhow, it’s not like you’re paying a lot of dough for these goodies, since they’re one of the cheapest Korean winter street foods around (they usually sell for KRW 700 or less).

Note: Prices for these street foods will no doubt change.

If this article was helpful, make sure to leave a comment and share your favorite Korean winter street food that might or might not be on our list. You can also leave a review for your favorite markets or restaurants on 10 Directory that serve any of these foods or explore new places on our list.