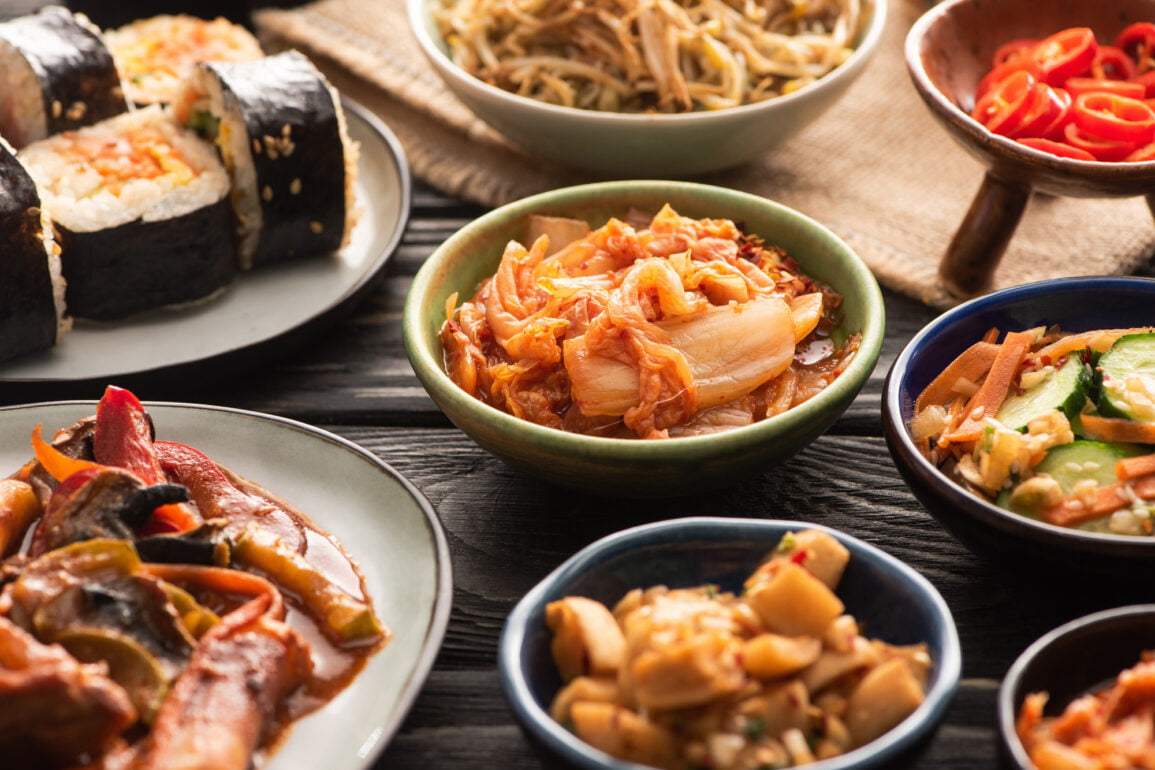 Banchan—Korean side dishes that automatically come with any main course you order with free refills to boot! Could there be a cooler aspect of Korean culture?

Granted, some places will just put out some tired, salty kimchi and a few other weird dishes that even Koreans just pick at. They’re probably in a fancy building in Gangnam-gu and pay too much for their rent, so they make up for it by dropping food quality.

But around the corner there’s sure to be a dive in an older building that will serve up four to six of the beauties below for the same price or less. You can tell whether you’ve found one by the fact that it’s crowded. Another good tip: more items on the menu likely means lower quality. Find a restaurant with under five items on the menu, and you’ve likely found one of the best restaurants in the gu (구, district).

There are a few Korean words you need to know for meals that revolve around banchan and therefore must serve up some good ones: baekban (백반) and bapsang (밥상). Baekban is a cheap, basic Korean meal that will have up to a half dozen banchan along with a bowl of rice and a little soup. Koreans will complain that it’s just like the food their mom makes, while I rejoice as I love this healthy food that I’m too busy to make myself. And if you see the word bapsang, then it probably means there will be a lot more banchan with the meal, up to 20 or more in smaller portions. Another occasion for one to rejoice.

From planting their potted kimchi in the ground to freeze-drying their fish and vegetables, Koreans have traditionally been absolute artists when it comes to food preservation. This marinated and heavily salted squid will virtually last forever, but have some rice ready before diggin’ in, and avoid it if you have high blood pressure.

Who knew that if you sliced radish up into thin strips and let it dry out it would turn into a totally different taste? Usually purchased already dried from the store, after a little boiling up and seasoning this ultra-crunchy banchan has a tad of sweetness added to the obvious spice.

Potatoes may be expensive here, but that doesn’t seem to stop restaurateurs from serving them. The mixture of soy sauce, corn syrup and/or sugar topped with a little sesame oil and sesame seeds makes for a delicious but unique potato flavor, different from the usual sour cream and butter.

A rare find in the rest of the world, you’re quite likely to find the soy sauce and red pepper-marinated version on your dinner table here. Shock Koreans by telling them that it’s not actually sesame leaf but perilla, a plant from the mint family. Then enjoy its fresh, apple-mint flavor.

There’s a reason women get less breast cancer in Asia, and it’s called tofu (check here). Okay, it’s not quite that simple, but it’s a huge factor. And when they panfry it then sprinkle some soy sauce seasoned with green onions and sesame oil on top of your tofu, eating healthy tastes great too.

Being that they are cheap, healthy, delicious and easy to prepare, it’s easy to see why this is a nearly ubiquitous banchan. Boil the sprouts up, mix with garlic, soy sauce and other seasonings, sprinkle with some sesame seeds and voila! The customers love it and free refills don’t hurt a bit.

A personal favorite. You’re in for a treat if you’ve never had lotus root before. This Swiss cheese-looking root can run the gamut of flavors and textures, from crispy to mushy or salty to sweet, depending on how long it’s cooked or how much soy sauce and corn syrup they used in the sauce.

What does the doctor always tell you to eat? Leafy greens. That’s what namul are, though the term applies to a slightly wider variety of plant life, including some things that aren’t green. Suffice it to say that when veggies are blanched or pan-fried and then seasoned they are often referred to as namul.

On the off chance you haven’t tried kimchi, do. And then do again and again. The first time it may be a little off-putting, but as with most great flavors it’s an acquired taste. That wonderful smell when they open the fridge—that’s just the fermentation process making itself known.

The Napa cabbage version of kimchi is of course the stuff of world renown, but the radish forms are no less delicious. “Bachelor kimchi”—so-called because the green shoots at the end resemble the ponytail of bachelors in the Joseon-dynasty—is spicy and salty like regular kimchi but the Korean radish it’s made with gives it a pungent kick.

Italians, rejoice! You can get plenty of eggplant here and it’s delicious, although it’s usually the Japanese variety, which is more narrow and cylindrical than fat and egg-shaped. Its shape leads to a more typical thick, julienned cut when they sauté it, leaving more skin on it.

Anchovies are the perfect way to add a little saltiness to whatever you’re eating, and with polyunsaturated fish oil, plenty of vitamin E and D, and minerals like calcium and selenium, they’re like crunching your way through your daily multi.

Who doesn’t like pan-fried veggies? Jeon (전) is pretty much egg-battered and deep-fried anything. Often the best Korean chefs (read “mom”) will batter and fry up cod, mushrooms and tofu in this way, but the most common kind is usually hobak—zucchini. For more on jeon, see our Taste of Korea article.

Egg is gyeran (계란), and mari (말이) means rolled up, so gyeranmari is rolled-up eggs. An egg and veggie mixture is poured into a pan and then after it’s cooked a bit it’s rolled up into a cylindrical shape. Gotta love it when this shows up.

Fish pancake, fish hotdog, fish donuts—whatever you call it, odeng sautéed up with a little onion, green onion or carrots is a delicious little side dish. Of course, since it’s ground fish paste mixed with flour and deep fried, it’s not necessarily the healthiest of the dishes on your table.

Let us know in the comments what your favorite Banchan is!