A Taste of Korea: Jeon – Pancakes Aren’t Just for Breakfast

Loaded with mushrooms, seafood, kimchi, and green onions, jeon shows us the savory potential of pancakes. 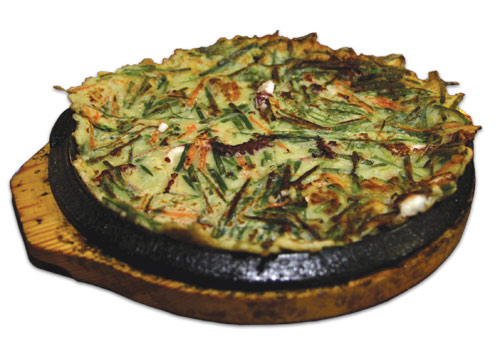 When I first got to Korea I was regularly taken to eat Korean food in different parts of the city. Having faced down the bewildering array of banchan (반찬, side dishes: also see p. 24), the Korean pancake jeon became my go-to guy, my safe port in a storm. Easy to pick out in a crowd and guaranteed not to give unusual taste sensations, jeon was my easy transition to the wonderful food of Korea. And after I eventually made a few at home myself, it became one of my favorite quick and easy dinners.

Jeon is a basic term for a multitude of pancake-style appetizers or side dishes. These are often served at celebration or ceremonial tables such as jesa (제사, ancestral rites) and charye (차례) at Chuseok. In fact, as Chuseok will be held this year on September 12th, this could be an excellent chance to visit Korean friends and try jeon, as well as the rest of the delicacies of the Chuseok table.
Jeon is usually named after the main ingredient. One of the most basic and common varieties is pajeon (파전), made with scallions and chives. It can be found both hot and cold and ranges from the size of a small coin to the width of a frying pan. It is so simple to make: batter made of basic flour, water and egg is mixed with chopped green onions and then pan-fried.

Other popular variations include kimchi, mushroom, prawns, beef, chili peppers and different kinds of fish and seafood. In some cases, ground meatballs, large whole vegetables or pieces of meat are coated with the batter and fried. This is technically not a pancake but it still falls into the same family. In a lot of the markets here you will see vendors with rows of what look like tempura of various vegetables but are in fact these delicious jeon.

Alongside its other family members is nokdujeon (녹두전) or as it is also known, bindaetteok (빈대떡). I came across this first in one of the old covered markets where an old lady was spinning two giant stone wheels to create a mushy paste. It turned out to be mung beans and she was making nokdujeon. The paste was mixed with a little green onion and fried, crispy golden on the outside and still soft in the center. Delicious, and a great beer snack.

Jeon also is found in Korean desserts where a pancake using edible flowers is used to make hwajeon (화전). The base is made with sticky rice flour and is close in texture to tteok (떡, rice cake). They stand out as the bright pink flower on the flour background is very striking. It is sometimes served with a punch made with the same azalea flower petals.
As one of the simplest but most enjoyable dishes to be found in Korean cuisine, jeon should become part of everyone’s cooking repertoire before they leave Seoul and its great food behind.

Netizen’s Picks
Gukilgwan Surasang 국일관 수라상
Halfway between Jeonju and Gwangju, visitors reach the slopes of Naejang Mountain, and it’s here at the entrance to this national park that you will find this haven for hungry travelers. Take a load off while enjoying a drink and a dish of their delicious jeon.
• 46-20 Naejang-dong, Jeongeup-si, Jeollabuk-do. 063-538-7930
——————————————
Jongno’s Mr. Jeon 종로 전 선생
With 18 branches found in Seoul, Daejeon, Jeonju, and other cities, this chain is a good place to try a variety of different kinds of jeon. If you’re not sure what you like, try the jeon sampler (종로모듬전, jongno modeumjeon). jeon114.co.kr
——————————————
Wanderer’s Pajeon 나그네 파전
Weary Seoulites hankering after a plateful of pajeon head to Hoegi Station (line 1, central line) near Kyunghee University for some of the city’s best. Try a serving of gochu twigim (고추튀김, fried peppers) and some makgeolli to keep your pajeon company.
• 334-85 Hwigyeong 1-dong, Dongdaemun-gu, Seoul.