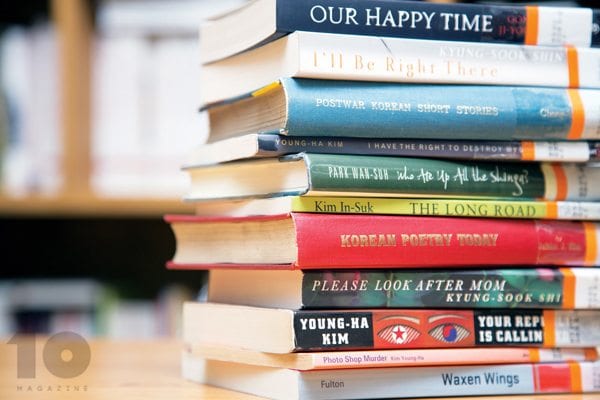 An Introduction to Korean Literature

If translated literature is a window to a culture, a reader might be forgiven for envisioning Korean literature as a brick cubicle, bomb shelter, or igloo. Despite a 2,000-year history and active national literature since the advent of Japanese colonialism, not much Korean literature is known outside Korea. While other aspects of Korean culture (PSY, anyone?) have enjoyed international “waves” of varying size, Korean literature hasn’t, both because it can be a little daunting, and translation and publishing haven’t always been what it can be.

Luckily, on the back of successes by a few authors and some game-changing projects by publishers, this lack of awareness is being slowly erased. It is now a great time to begin to read Korean literature, either to learn more about Korea or for the sheer old-fashioned love of reading.

In the last decade, Korean writers have begun to make waves internationally. Kyung-sook Shin’s “Please Look After Mom” became the first Korean translation to earn a spot on the New York Times Bestseller List, while Shin became the first woman and first Korean to win the Man Asia Literary Prize. At the same time, Kim Young-ha has been producing a string of works that have found success among English, French, and Polish (The first Korean author to capture that all-important Polish language demographic!) audiences with his relentlessly modern works, including “I Have The Right To Destroy Myself” and “Your Republic is Calling You.” Other books, including Han Gang’s terrifying “The Vegetarian,” have been published to rave reviews.

History of Korean Literature in Three Paragraphs or Less

Like most literature, Korea’s has a “classical” and a “modern” era. The classical era begins with oral literature, including Pansori, and this runs up until about the end of the 19th century. This literature was originally written in Chinese and is relatively formal and philosophical, as it was typically written by yangban or educated intellectuals. Occasionally something was written by kisaeng or housewives, but most of that was never published, and thus did not survive.

Dynastic change, as well as the normal historical process of loss, has caused a great deal of Korean classical literature to disappear. Another confounding fact is that for centuries, Korean literature was not written in Korean, but in Chinese, and thus was only available to the educated elite. While Korean texts have since shifted entirely to Hangul, this literature is still in the much less accessible Hanja (traditional Chinese characters).

However, at the end of the 19th century, the modern era kicks off, hangul begins to be the alphabet of choice, and the field of authors expands considerably to include women and non-yangban. The modern literary era is subdivided into the colonial, post-war, and international/postmodern eras—each of which has an entirely different voice.

In general, the more recent the work is, the more likely it is that an English-language reader will like it, although, for people interested in Korean history and culture, the older works are also quite good. This is because much of modern fiction is a critical commentary on contemporary Korean society and politics. Add to this the fact that Korea is a very high-context culture (shared knowledge, experience, and education), and the result is literature that is sometimes difficult to understand.

The good news is that this is also why reading Korean literature while in Korea is absolutely the best way to do it. Being in the culture and having an understanding of it makes reading the literature much easier. So, finish this article then go out and grab some books!

In the last few years, the number of high-quality translations has dramatically increased, partly on the back of two wonderful series and a handful of collections that have proven their worth over time. It is also these series and collections that provide the most convenient way to get a decent idea about Korean literature and what you might like as a reader.

Probably the best collection out there is “Waxen Wings,” edited by Bruce Fulton, partly because it seems to be the first collection that has ever selected its stories with an eye for what English-language readers might like. “Land of Exile” is another excellent collection, to begin with, but be certain to get the updated edition which includes several more contemporary stories.

There are other themed collections as well. If you are one of those people who instinctively head towards the sound of sirens, smell of smoke, screams of children, or M. Night Shyamalan movies, “The Red Room” might be just right for you. The anthology, appropriately bound in—what else?—red, contains three stories that focus on Korean traumas, including the excellent “In the Realm of Buddha” by Park Wan-suh. This is not particularly cheery stuff and should not be read near sharp objects or gas lines.

The ASIA Publishers’ “Bi-Lingual Edition of Modern Korean Literature” is perhaps the most comprehensive way to read Korean modern literature. It is seven collections of 110 books that include many of the most important stories in Korean literature. These books include the text of the work in its original Korean, as well as a summary of the plot, the social and historical environment of the work, critical commentary from Korea, and a biography of the author. These add-ons are extremely useful as they provide all the context a reader could want to fully understand the books.

The collection includes works from some of the earliest Korean modern writers including the canonical “The Wings” by early Korean modernist (postmodernist, really) Yi Sang and “The Cloudburst,” the pastoral story of young love by revered author Hwang Sun-won. Both of these works are not only literary classics, but also on the Korean curriculum in preparation for the Suneung (ability test); they are works with which all Koreans are familiar. Read these and at hoe-sik (company dinner) you can surprise your Korean friends with your awesome knowledge of Korean literature. It’s probably worth an extra shot of soju!

ASIA Publishers is also currently printing a “K-fiction” collection of works from not only the “modern” era but written by contemporary authors as well. These books come out once a year (normally five or so at a time) and, like their predecessors, are bilingual and chock full of interesting essays, history, and criticism. The authors are a who’s who of modern Korean literature with Park Min-gyu’s quirky “My Dinner With Buffett” and Park Hyoung Su’s “Arpan” being among their best.

For a reader interested in longer works, an excellent option is a collaboration between the Literature Translation Institute (LTI) of Korea and the Dalkey Archive Press. LTI is the official government arm of literature translation, and over the last few years has been doing wonderful work supporting Korean literature overseas, including work with international book fairs, supporting overseas publishing, creating social media supporting Korean authors and works, and a host of other initiatives.

With Dalkey, LTI has published fifteen longer works of fiction from the modern era. The translations begin with the “father” of modern Korean literature, Yi Kwang-su, whose “Soil” is a daunting 510 pages upon first glance, but speeds by like the KTX with its combination of mustache-twirling baddies, a good-hearted hero, and Korean-drama level of unlikely coincidence. The collection runs up to the extremely postmodern “A Most Ambiguous Sunday, and Other Stories” by Jung Young Moon and includes excellent works in between, including Ch’oe In-ho’s Philip K. Dick-Esque “Another Man’s City” and the amusing and heartstring-tugging “No One Writes Back” by Jang Eun-Jin.

If you like family tearjerkers, you must read “Please Look After Mom” by Shin Kyun-sook. A second good choice is “Who Ate Up All The Shinga,” by Park Wansuh. Both are quite recognizable as from the Amy Tan genre of mother-daughter fiction.

If you like women’s literature, check out “Questioning Minds,” a collection of stories by women from the last century, or “Words of Farewell: Stories by Korean Women Writers” which contains stories by Sok-Kyong, Chi-Won and Chong-Hui. For individual writers, consider Park Wan-So’s “Lonesome You” or “There a Petal Silently Falls,” which contains three stories from the priceless Ch’oe Yun.

For a modern-ish exploration of the cost of development, in a novel of linked short stories, read “The Dwarf” by Cho Se-hui, a powerful story of a family crushed by economic development and the often unsung woes of Korea’s amazing economic success story. Yang Kwi-ja’s “A Distant and Beautiful Place” is another excellent work in this genre.

Humor is a bit tough to translate, but you can’t miss Kim Young-ha’s “Whatever Happened to the Guy in the Elevator?,” which can be found paired with the gritty “Photo Shop Murder.” “My Innocent Uncle” by Ch’ae Man-sik, is clever and cleverly translated, and “Camellias” by Kim Yu-jeong is a bit blunted in translation, but has an amusing story of young love.

The most well-known collection of North Korean fiction, “Korean Short Stories: A Collection from North Korea,” exactly matches that model. It is described by one reviewer as “industrial melodramas” and is likely to try the patience of all but the most dedicated reader. A more interesting start could be PEN’s “North Korean Writers in Exile,” which, as its title indicates, is written by North Korean refugees. This book mixes essays, poetry, fiction, and memoirs. Both of these books suffer from the occasional awkward translation and the latter has some typographical issues. Occasionally a short story will show up online, such as “Second Encounter,” originally published in Acta Koreana, but now available through Words Without Borders.

Finally, Words Without Borders has also published “Literature from the ‘Axis of Evil’” which has twenty-one works of fiction and poetry from seven countries, including Kang Kwi-mi, Hong Seok-jung, Lim Hwa-won, and Byungu Chon from North Korea.

Where to Find It?

If you are overseas, Amazon and other online bookstores beckon with the warning that Korean literature can be hard to track down unless you know specific book titles and/or authors, and the authors often have multiple Romanizations. If you are lucky enough to be in Korea, several bookstores stock the works suggested here as well as many others. Seoul Selection, by Gyeongbokgung, sells a wide variety of Korean literature and culture titles and is well worth a visit for browsing and a cup of coffee.

Kyobo also has a good selection of Korean literature in translation, but be warned that bilingual books are often inexplicably shelved in the Korean Literature section (this is true, for instance, of the ASIA Publisher books) so you may have to wander a little farther afield to find them. Other bookstores seem to have more limited stock.

For readers who don’t want to buy books, there are free alternatives. One of the best options is the LTI Library. The LTI Library is located between Samseong and Cheongdam stations near the COEX Mall and is open during regular working hours. LTI has also posted 50 PDFs of early modern Korean literature, including such alarming titles as “Hunger and Slaughter” and “After Beating Your Wife.” The KTLIT website has links to a variety of free stories online, and the indefatigable translator An Sonjae (Brother Anthony) has dozens, if not hundreds of translations available on his home page.

There’s a lot of great translated Korean literature already out there, and more and more are translated every year. As translators become savvier and publishers pick better and better works to translate, there has never been a better time to pick up a work of Korean fiction. Summer is around the corner so prepare to settle down in your favorite air-conditioned coffee shop and tuck into a Korean novel.

If you enjoyed this article make sure to check out Jeju Haenyeo School Helps Local Sacred Tradition Live On.