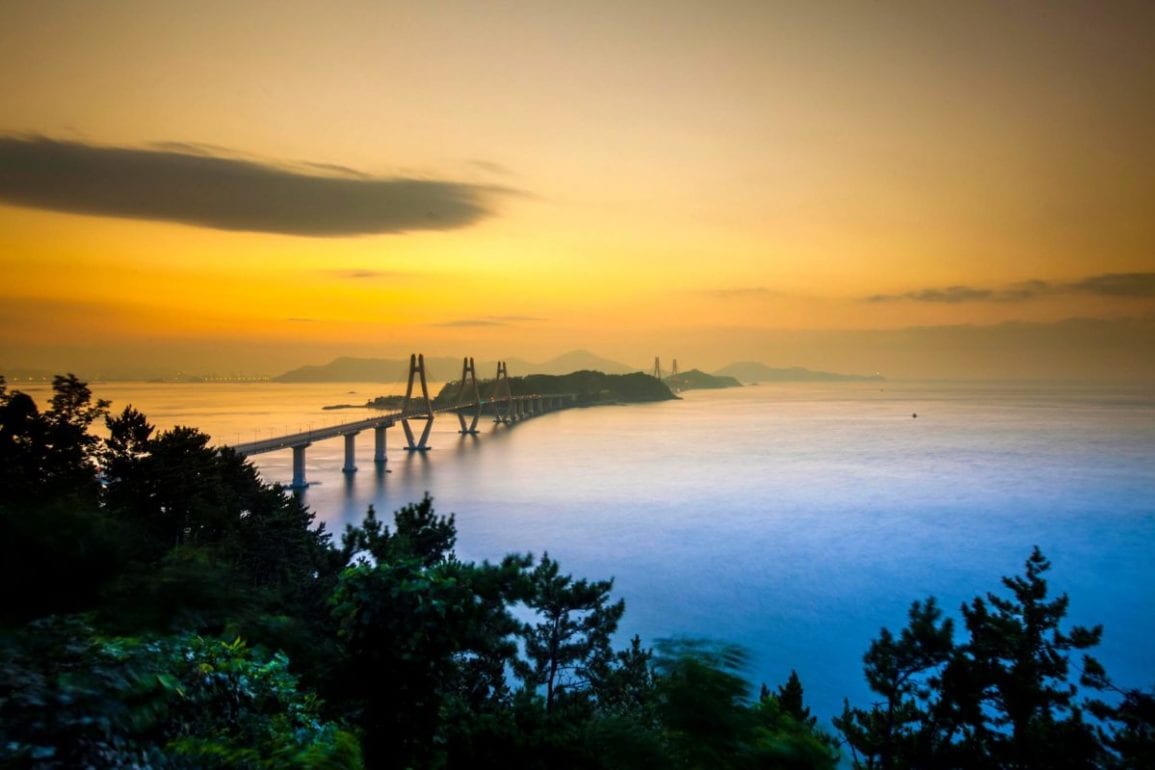 Rolling seas of green. Pristine clear waters. Golden sandy beaches. Gentle hull of waves. Refreshing breeze. Quaint hidden cafés. Glorious sunsets. Fresh grilled sea food. If these are the images that pop into your mind every time you think of a vacation, then you should be heading straight to Geoje Island for your break this summer!

Geoje-do also known as “blue city” is the second largest island, after Jeju, of the South Korean peninsula located off the coast of the port city of Busan. Connected to the mainland via Tongyeong through the Geoje Grand Bridge and via Busan through the Geo-ga Grand Bridge, which is an engineering marvel in itself, the island is easily accessible by road and ferry. A 4 hour drive from Seoul and a mere 1 hour drive from Busan, lays an island paradise you will never want to leave!

Popularly known as Korea’s major shipbuilding hub, Geoje has in its wake a striking coastline, bounty of natural beauty and many untold historical tales that makes this mystical island a perfect weekend getaway. While there’s so much to see and do in Geoje, there are some sights that simply cannot be missed especially if you are visiting for the first time. Here’s a little personally drawn itinerary for first time visitors to help you make most of your Geoje-do experience.

Day 1: On your arrival in Geoje: Exploring the tantalizing South

Begin your journey by cooling down at the Hakdong Black Pebble beach. Reported as #8 scenic views of Geoje, the Hakdong Pebble Beach is comprised of black mongdols (pebbles) lending this beach its unique character. You can find many fun water activities at the beach like Jet Ski, banana boat, flying boat and if you are lazy enough for these, you can simply rent a float and while away in the cool clear water.

A quick ten minute drive further down south from pebble beach will take you to The Windy Hill. Made popular through the Korean drama Carousel (2004) and Flower Garden of Eve (2005) the Windy Hill offers you some picturesque views of the sea and islands surrounding Geoje-do and is a great spot for some worthy photography. You can drive down further south to the Sinseondae Cliff  for an even more panoramic view!

If you are feeling well rested and perked up, this is the best time of the day to hike up Mount Mangsan (397m) and to watch the glorious sunset over the Yeocho- Hongpo islands, a cluster of islands located at the base of the mountain. You can also get a view of the Hallyeo Haesang National Park turning a bright orange under the setting sun from the peak.

There is no better way to end the day other than a camp and a barbecue dinner. Retire for the night at the Hakdong Auto Camping site (055-640-2400) located right across the pebble beach. With a total of 171 campsites, this is a highly recommended camp site in Geoje due to both its location and facilities provided. Enjoy your night with your family and friends with the rhythm of the sea waves and gear up for another exciting day at Geoje Island.

Day 2: Time for a ferry ride, a lesson in history and an unexpected Night life!

No visit to Geoje Island is complete without a trip to Oedo Botanical Garden, a rocky barren island converted to a botanical marvel housing over 3000 species of plants, by the hard work and determination by one couple,

attracting tourists from all over the world. The garden consists of well- manicured lawns, flower gardens, cactus exhibits and South Korea’s smallest church all done in Mediterranean style making it a refreshing way to start your 2nd day in Geoje.

You can reach Oedo Island via an invigorating ferry ride through the Jangseungpo Ferry Terminal. The ferry ride passes through the iconic Haegeumgang Island, yet another not to be missed sight here. Rising at a height of 116 m above sea level, the island is renowned for its rocky structure, hidden caves and was once believed to a be a source of herbs for immortality!

After relaxing in the lap of nature, you can take a few steps backward and peek through a time machine to take a look at what life in Geoje was a few decades ago. Take a look around the Historic Park of Prisoner of War Camp (POW), an open museum that showcases the life, struggles and riots that occurred in the POW camps during the 1950 Korean War.

For those who may not be aware, Geoje-do was the sight of the POW camp where nearly 170,000 North Koreans and Chinese were held as prisoners during the war and is an important relic of Geoje history.

Located in the central part of Geoje (Gohyeon- dong) and to close proximity to the POW camp is Mount Gyeryongsan (566m), a not-to-be-missed hike that offers the best views of the entire island of Geoje. Along the hike, you can catch glances of the remainder of the POW camp communication center. At the summit, stands a pagoda built by the Buddhist monk Eusang where you can rest to catch your breath, snap some pictures and take in the incredible view!

After a long day of sightseeing and hiking, it’s time to get a much-deserved treat. Head downtown to the most popular town of Geoje, Okpo-dong. Well frequented by the expat population and often mimicked to be a mini Itaewon, you will find a multitude of restaurants, pubs, lounges and bars where you can reward yourself with an excellent meal, a tall glass of beer (soju) or some tasty cocktails. Many bars have live band performances; some have open spaces if you feel the mood to dance and of course the customary Noraebangs! A great way to call it a day.

After exploring the natural landscapes in the south of the island, it’s now time to take a look at what the east beholds. The eastern part of Geoje has in its wake the much talked about Jisimdo (Camellia Island) and Gonggoji Farm, both of which are recommended #8 scenic sights in Geoje.

A twenty minute ferry ride from Jangseungpo ferry terminal, Jisimdo Island is an enigmatic cliff island densely populated with evergreen trees. Majority of the island is covered with camellia trees; hence also the name camellia island, that bloom with luscious red flowers in the spring but the island is pretty even without the flowers. A morning walk through this island offering a great view of the South Sea and fresh breeze will leave you feeling energized for the rest of your journey.

On your way back to town, make a brief stop at the Gonggoji Farm. Located in Yegu village, Gonggoji is a man-made flower park with daffodils and camellia trees that bloom full well in spring and early summer.

As the day begins to get warmer, cool down at the Geoje-do Sea Spa (055-638-3000-9) which is a hot spring using alkali water that has great benefits for the skin. The spa has an indoor and outdoor fun water park and even a fruit spa that remains opens until midnight!

With the clock ticking and time for your departure getting closer, you might only have a couple of hours left before you leave Geoje and head back home. Before heading back, do make a stop at the Okpo Victory Commemorative Park. The exhibition hall is elected to honor the victory of Admiral Yi Sun-Shin against the Japanese invasion of 1592 and the story is a proud moment in the heart of all the native islanders.

A final destination in Geoje would without a doubt be the bamboo theme park located atop a hill offering great ocean views. Along with fun activities like zip-lining and paintball, the park has a quaint coffee shop that would be an ideal stop to enjoy a cuppa and watch the sunset before your journey back home.

Although not as popular as its sister island Jeju, Geoje-do does offer a great blend of nature, adventure, history, culture, relaxation and entertainment, making it an ideal holiday destination right in the middle of the fast-paced urban life we are accustomed to. So this summer take a break and enjoy the beauty of this island paradise; a slice of fantasy before turning back to reality!

For more hidden-gem islands to travel to, see our article on Hongdo and Heuksando Island: The Untapped Korean Destinations.