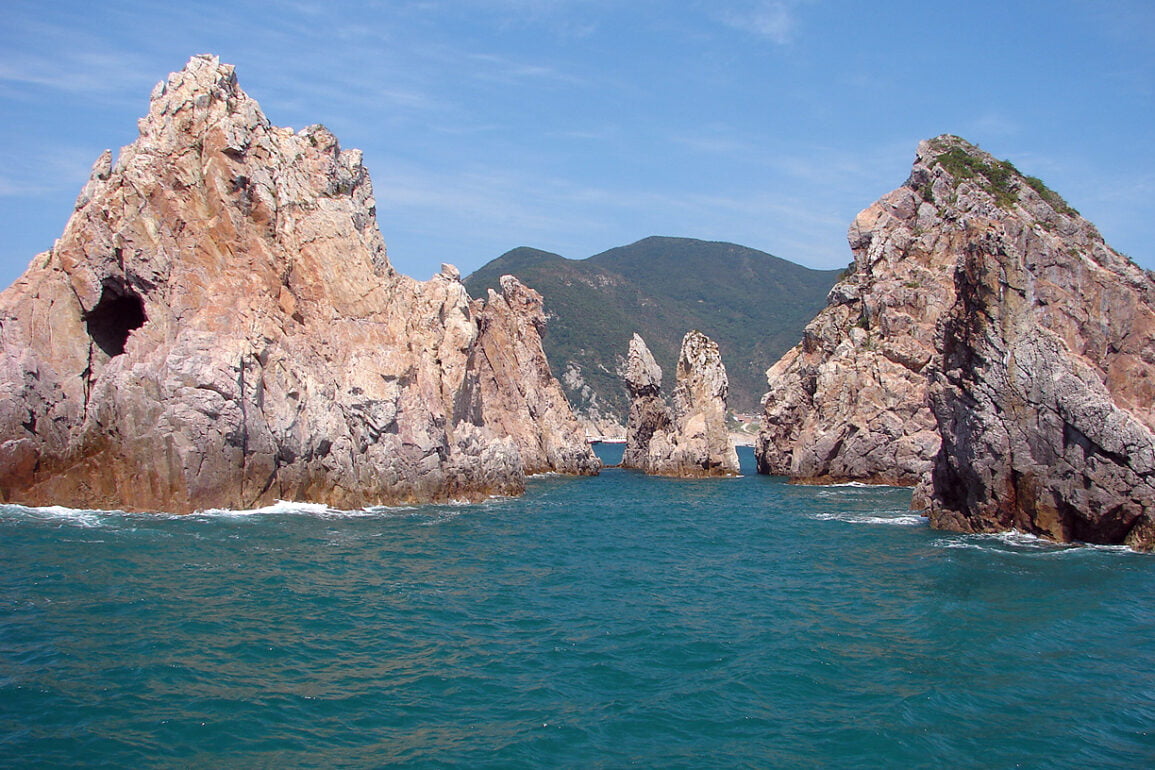 Hongdo is an island in the Yellow Sea located off 71 miles southwest the port of Mokpo covering an area of 2.5 square miles.

“Do they have electricity and running water yet?” my friend Larry asked a few days after I’d returned from Hongdo and Heuksando. Since he visited in the early 70s, they have indeed been equipped with electricity, running water, and telephone and internet service, but none of these modern conveniences has left a deep mark on these remote islands where modern concepts of time become meaningless.

The journey to the Daedohan Marine National Park islands of Hongdo and Heuksando begins in Mokpo, at the end of the Honam railway line on the southwestern corner of the peninsula. Several boats leave each day from the imposing new domestic terminal. Rounding the cape of Mokpo Port, the ferry passes between the giant concrete supports for the Mokpo-Kohado Bridge, a monumental construction project-cum-photo opportunity. After threading between the cluster of islands that hug the coast, the ferry reaches a stretch of open sea notorious for its choppiness.

At this point, several passengers may rise from their seats and stagger ominously toward the bathroom stalls, and the crewmembers may begin passing out small plastic barf bags. Such is the glory of the islands that thousands of travelers brave this frightful passage year by year.

The further of the two islands is Hongdo (홍도). When a weekend’s worth of travelers disembark, the pier is filled with jostling crowds of middle-aged tourists. The bright pattern of their hiking jackets is mesmerizing, but if you look beyond them you’ll glimpse some of the wildest cliffs in Korea. From the pier, you may follow the red-, pink-, and purple-jacketed tribe onto a tour boat that circumnavigates the island, taking in its cliffs and pinnacles (W22,000; 1.5 hours), or you may explore the steep, sun-baked lanes of the town and the charmed hills of the northern section of the island.

At the joint between the north and south sections you’ll discover Mongdol Beach, covered with perfectly round stones and flanked by a rocky wall that feels higher than the 63 Building in Seoul. Continue further to reach the path up to Gitdaebong (깃대봉, 368 meters), continuing on to Village #2 (2구 마을) and the lighthouse.

The southern section of Hongdo is presently off-limits to visitors, though a trail will be completed within the next couple years. At least one of the locals – a small-plot farmer with a quick temper – is fiercely protective of this undeveloped side of the mountain, so proceed with caution.

Whether you’ve gone for a round-the-island cruise, a nature walk, or a dip in the ocean, you’ll probably still have enough time for a meal. The restaurants on Hongdo serve up maeuntang (매운탕, classic spicy seafood stew, W30,000), jangeotang when available  (장어탕, eel stew, W30,000), jeonbokjuk (전복죽, abalone porridge, W15,000), and several types of hoe (회, sashimi, W60,000). Saengseongui (생선구이, grilled fish) is also available at the food tents along the pier.

If you’re embarking on a weekend trip to this set of islands, you’ll have to decide which of the two to spend the night on. The larger of the islands is Heuksando (흑산도), with a wider range of accommodation choices than Hongdo. While the harbor curves for kilometers in a near perfect semi-circle, Heuksando town is relatively compact. The fiscally intrepid will shun the hotels and head straight for a minbak (민박). In some parts of South Korea minbak function as home-stays, but here they are more like low-grade motels (try 만수 민박, 061-275-9956; rooms start at W30,000). An experienced traveler recommends staying at one of the isolated coves, as there are minbak scattered around the perimeter of the island.

From the harbor, you may explore the entire circuitous coast or head for the sprawling highlands. (Inquire at the tourist information booth for information on bike or scooter rentals.) The forested hills are just as untouched as those on Hongdo, and are filled with the smells of plant life and the calls of birds stopping over en route from Siberia. Along the coast are several beaches, among which the most popular and accessible is Baenangkimi (배낭기미 해수욕장 ). Travelers with time to spare may want to move on to some of the small nearby islands for a taste of even greater solitude and remoteness. Ferries sail on odd-numbered days to Gageodo (가거도), Manjae (만재), and Sang-Hatae (상-하태).

All the culinary specialties found on Hong-do are also available on Heuksando, with the addition of hongeohoe (홍어회, raw skate), the fish that made the island famous. Restaurants in Seoul and other mainland cities serve skate that has been imported from Chile, while in Heuksando it is still possible to sample a fresh catch. Most South Koreans are familiar with the fermented version of the dish: the longer it is fermented, the stronger the stench of ammonia.

One of the local skate restaurants, Hongtak (홍탁집, 061-275-9925), serves raw skate that has been caught the day before, with a tender and delicate flavor instead of an ammonia sting. If you are hesitating over this dish, consider ordering samhap (삼합), a combination of raw skate, pork belly, and old kimchi (a two-person serving is W40,000). If you’re in luck, there will be fresh homemade magkeolli on hand, just like during the 70s.