How To Navigate The Real Chinatown Of Seoul In Daerim 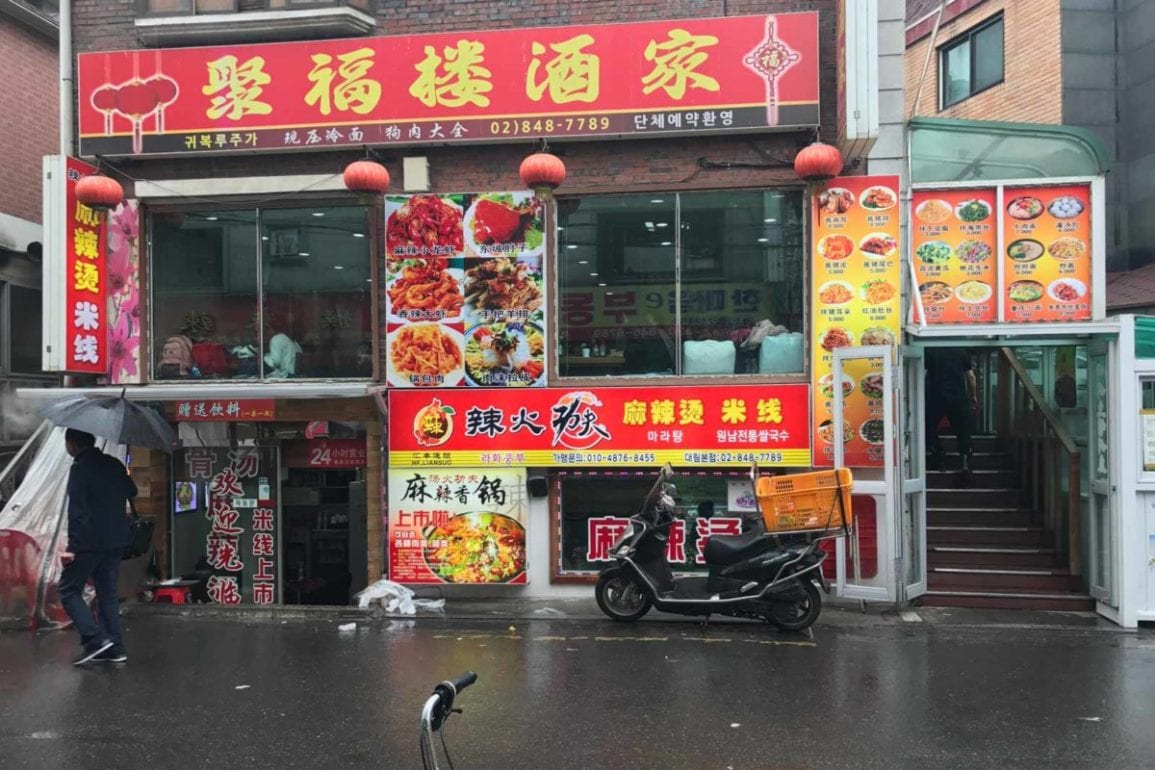 When I first moved to Seoul and started craving Chinese food, people typically told me to go to the Chinatown in Incheon. However, I didn’t want jjajangmyeon (짜장면, tangsuyuk (탕수육, sweet-and-sour pork) or jjambong (짬뽕).

If jjajangmyeon isn’t your idea of Chinese food, try the beef noodle soup, dumplings, and lamb skewers found in the Daerim region of southeastern Seoul.

Over a year ago, I heard about a Chinese-Korean neighborhood in Seoul around Daerim Station on line 2 and line 7 where you could get “real” Chinese food, particularly Northeastern-style dishes. The area around the station is home to many Joseonjok (조선족), ethnic Koreans who were born or grew up in China.

Korean and Mandarin are spoken here, often in the same conversation. It helps to know one of these two languages, but with a few tips it’s possible to navigate the restaurants and stalls without an extensive knowledge of either language.

From exit 12, take a left onto Beodeunamu-gil (버드나무길). Immediately to your left you will see a 24-hour restaurant with a carved wooden American eagle statue outside the entrance.

For a meal, there’s a great place at the first major intersection down Bobae-gil (보배길) and to the right, called Big Sister Lu’s Beef Noodle Soup (A in map below), open 24 hours and, perhaps unsurprisingly, specializing in beef noodle soup.
Their menu, which also features other Northeastern Chinese specialties, is in Chinese and Korean. Order a big bowl of their rich soup niuroumian, either spicy la or numb-spicy mala, for W5,000. Additionally, try the plump boiled dumplings stuffed with pork and celery called shuijiao (僭虜舒). The staff are very friendly and appreciate it if you speak Mandarin.

If you’re either feeling adventurous or can speak Mandarin/read Chinese characters, check out Shanxi Knife Cut Noodles (02-2637-4005), a popular noodle shop on the left side of the main street past Bobaegil and down from the big supermarket on the right (B).

Look for the ladies managing noodle baskets, ramen-style, out front, and the entrance to the right. Once inside, you’ll notice the handwritten menu in Chinese characters only, posted on red signboards. The thing to get here is dan dan mian, originally a specialty of Sichuan province in central China: a big bowl brimming with thin wheat noodles swimming in a peanuty broth, topped with pickled greens.

You can order it spicy or mild(er) for W5,000. Different kinds of noodle soups and stir-fried dishes are also on the menu.

For a quick snack while wandering, there are a variety of stalls along Beodeunamu-gil and in Jungang market that offer bao (steamed buns), deep-fried Chinese doughnuts, and bing (large egg-topped pancakes with or without scallions).

A stand down the road (C) past Shanxi Knife Cut Noodles on the same side offers six steamed pork and vegetable baozi (similar to bread-type mandu) for W2,000. Try the scallion pancakes in the market at a place run by a chatty man from Harbin and his Korean-Chinese wife: several large slices for W2,500.

Daerim is also a source for some harder-to-find, reasonably priced groceries. I often go there for shallots, large fingers of ginger root, and bunches of cilantro.

One of the main stores is located on the left corner of Beodeunamu-gil and Jungangshijang-gil (D, 02-832-8871), open until midnight, where you can buy Chinese sauces, liquor, star anise and dried chiles, pickles, pidan (hundred-year-old eggs), and other food products. It’s always an interesting place
to explore.

If you’re in Daerim at night, I suggest some lamb skewers and Tsingtao beer. Though places featuring the iconic skewer character 咺 (chuan) are scattered everywhere, if you take a left at the grocery store onto Jungangshijang-gil, go past the market, and turn right onto Dasarang-gil, you’ll hit several places on one block.

양고기고치귀 전문 (E) has a bright wooden interior and grills at each table where you can heat up your skewers. Another place is Hounrae (호운래), with the grill out front. Alongside the skewers come the ubiquitous Chinese pickles and peanuts, and usually some Chinese-style kimchi. Both places sell ten lamb skewers for W9,000.

Given its wealth of restaurants and shops, one visit to Daerim will barely scratch the surface. With its visually and gastronomically hybrid character and friendly people, Daerim may soon become your go-to place for a Chinese food and culture fix. 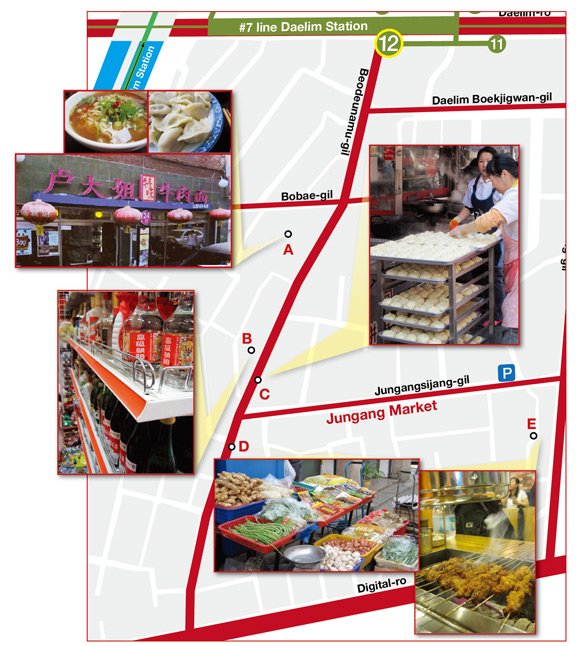