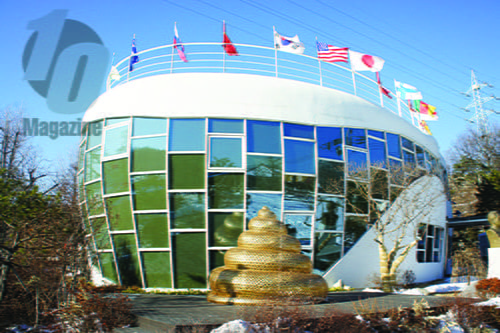 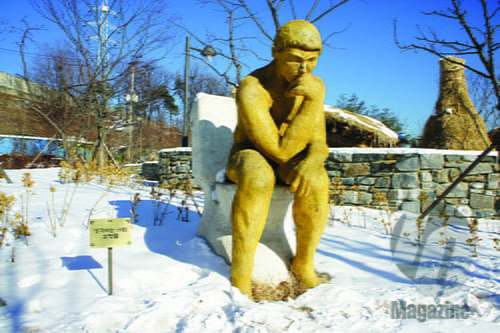 The warm summer weather is great for getting out in Seoul to see palaces, river parks, and the biggest toilet structure in the world.

Yeah, Korea has a gigantic toilet– or, at least, a house that looks like one.  And it’s actually worth seeing.

Sim Jae-duck, who passed away in 2009, was the former mayor of Suwon City(1995-2002)and had a lifelong fascination with anything toilet-related.  He was credited with establishing the World Toilet Association in 1999, and then became the first president of the Korean Toilet Association.

Sim called his custom-constructed house “Hae Woo Jae” in Korean– partially derived from “haewooso,” or temple toilet.  Literally, Hae Woo Jae means a house where a person can rid oneself of anxiety or stress. It was opened to the public in October 2010.

There are plenty of visual oddities, including the “golden poop” created by kindergarten and elementary students. The house’s centrally located commode(of course!) features transparent walls that go opaque when the door is locked.  Outdoors there are interesting statues– from little children relieving themselves in lavatories to a giant squatter toilet with a huge brown mosaic poop.

Speaking of poop: the very friendly staff are never shy about using that word when offering English language tours of Mr. Toilet House. Behind the inevitable giggles lays a relatively serious intent.

International organizations say between one and three million people die every year from diseases directly related to lack of proper sanitation.  Spreading awareness of the need for universal sanitation– with a little levity when needed to cut through the embarrassment– was one of Sim’s purposes in life, as it is for the house he left as a legacy.