Finding Hongeo: The Korean Delicacy That Might Make You Cry 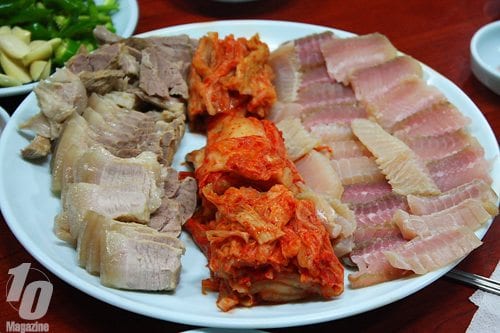 Words and shots by Matt Crawford 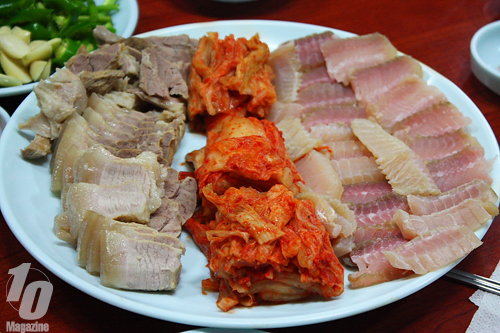 The skate, known in Korea as hongeo (홍어), is a flat, kite-shaped fish with a fleshy pink complexion. From some angles, it looks like a sea creature with heat rash. The flavor of both raw hongeo and hongeo boiled in soup is as singular as its appearance. Like shark meat but more so, hongeo reeks of ammonia. This extreme sensation proves alarming at first, but with experience the fish becomes tasty in a strange way.

The hongeo-eating tradition is strongest in the Jeolla provinces, but there are numerous options to choose from in Seoul. The best place to start your hongeo habit might just be the hongeo alley in Yeongdeungpo, not far from Yeouido, where eight great skate establishments stand side by side. The venerable Grandma’s Hongeo House (할매홍어집), serves every known hongeo dish. Though there is no English menu, they do have table seating as well as traditional floor seating.

To sample the pure article, consider ordering raw hongeo (홍어회), which comes with raw garlic and green chili pepper. While the bone cartilage is crunchy, the flesh is remarkably tender, with a sting of ammonia that numbs the mouth and clears the sinuses. 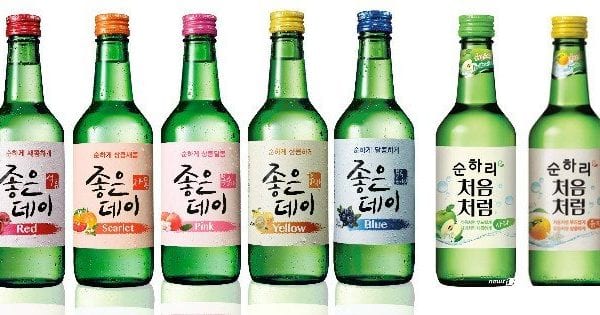 Other dishes include stew (홍어탕) as well as samhap (삼합), a trifecta of raw hongeo, old kimchi, and fatty pork (see picture). Hongeo may leave you with an aftertaste reminiscent of the industrial agents your mother used during her Sunday cleaning, or it may become an acquired taste, like Stilton cheese or durian fruit. Eat at your own risk! 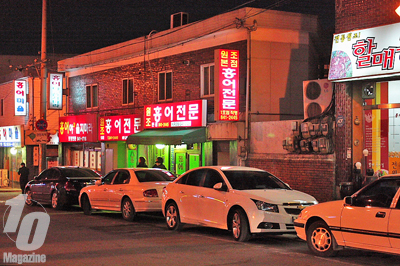 Directions: Take subway line 1 to Yeongdeungpo Stn. From exit 1 or 2, follow the main road until you reach U-shin intersection (우신사거리), and continue to the Hana Bank on the corner. The hongeo street slants crosswise behind the bank. Grandma’s Hongeo House can be contacted at 02-842-6868.