A perennial favorite of Korean cuisine, bibimbap reminds us that it’s okay to get a little mixed up every now and again.

Chances are that bibimbab was your first introduction to Korean food as it seems to be the permanent second option on Korean Air flights in and out of Seoul. It certainly was for me. Since then I have purchased a rice cooker and mastered the art of making bibimbap at home. As Korean dishes go, it is one of the simplest to prepare and serve.

Basically, bibimbap means mixed rice in Korean and is a simple dish of steamed rice topped with a selection of vegetables, greens, beef and an egg. You then simply mix the whole lot with gochujang, Korea’s fiery red pepper paste and a little sesame oil. One of the key points which makes this such an attractive dish is that you, the diner, control just how spicy it will be since you can add as little or as much gochujang as you can tolerate.

In addition to the standard dish, you can also find a number of variations of the dish. First, there’s hwoedeopbap (회덮밥), which a lot of Japanese restaurants carry as sashimi rice. In this version, raw fish replaces the meat and the gochujang is adjusted a little to be lighter and easier to mix. The other bibimbap family member I unhappily burned my fingers on is dolsot bibimbap (돌솥 비빔밥). This little beauty is baked in a clay pot and served screaming hot from the oven – hence the burnt fingers. The key point of this dish is that the rice will brown up at the base of the pot, resulting in a toasted flavor that is quite popular here. This version is not as easy to mix up as the others, but it’s still enjoyable.

I made one of my best bibimbap memories at a small counter down in Dongdaemun Market. All the ingredients were arranged in front of me, and I got to choose what I wanted to add to the rice. It was then mixed, served and eaten in an enormous stainless steel metal bowl that could have easily held another five portions. As fast food goes, this was one of the quickest meals I have ever had, cheap as chips and delicious. Of course, it did feel a bit like I was eating from a basin! From that first airline encounter, bibimbab has grown to be one of my favorite Korean dishes, and I am sure to keep making it long after I leave this country behind. 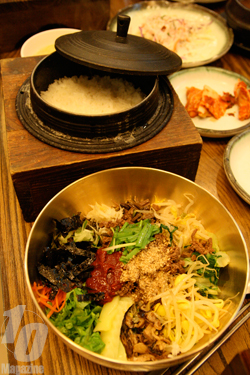 Secret Bibimbap in Jeonju
Hidden in the back streets of downtown Jeonju is one of the best-kept secrets of this beautiful city. Jungang Hoegwan (중앙 회관) is quite possibly the best bibimbap restaurant you’ll ever visit. With prices starting at W10,000 for Old-Style Stone Bowl Bibimbap (옛 돌솥 비빔밥), you’re guaranteed a feast for the eyes and the belly. The table is filled with deliciousness: spicy glass noodles, crispy mackerel in a sweet soy sauce, bitter dandelion leaf salad, and other tasty side dishes. The bibimbap itself is mixed for you at the table, and I guarantee that you won’t find a better tasting bowl of rice on the peninsula. Take the side street opposite the Jeonju Gaeksa and after 30 meters or so turn right. It’s on the left hand side.
063-285-4288 
Words and Shot by Paul Matthews