With the weather getting rapidly cooler and the events stacking up, Halloween is well on its way here in Korea. Many of the spook-savvy will have already chosen costumes.  For those who haven’t, why not pick something Korea-themed?

As a Halloween fanatic, I myself have spent several years of the holiday here on the peninsula trying to be as culturally relevant as possible, going from Korean food themes to historical themes and back again.

Many friends have done the same, and, through delving into the internet image banks, it became clear that many other expats have had the desire to be “Korean” when celebrating Korean Halloween.

With this in mind, I present you with 10 Extremely Korean Halloween Costumes from the deep, dark internet (and my own Halloweens past) to consider for this year’s crafting.

*NOTE: I’ve excluded hanboks and taekwondo uniforms because — come on.  We can do better than that.

With a little construction paper and a strong binge drinker’s will, a Korean beer, soju, or makkeoli costume can easily come together, as demonstrated above.

The taped-on squid anju is a particularly clever touch.  If nothing else, these costumes lend themselves to endless photo opps of every other costumed party-goer pretending to drink from your head.

Few things are more Korean than a steaming bowl of Shin Ramyeon.  You might go sexy with this, as in the stylized photo above, or you might go boxy or even just flat with sandwich-board flaps on the front and back. In any case, color it in and grab some sticks and you’ve got a festive and photogenic option. 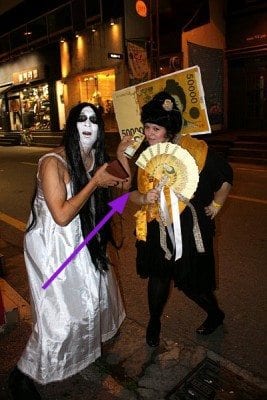 Even if not everyone will get straight historical references, what they do all understand is straight-up money.

Just print yourself a giant golden 50,000 won or a bright green man-won and style your head and shoulders in the likeness of Shin Saimdang or King Sejong.

Once again, this idea leads to endless photo opps of ghosts, zombie, and people in animal onesies holding up money next to you.

Just as kimbap is one of the cheapest and easiest foods to fetch for lunch, this quick and easy costume won’t break the bank or take too much time.

It does, however, look clever and colorful, and will make for a great obligatory photo opp if you stop for a cheap late-night kimbap between parties.

If kimbap is somehow not Korean enough, the folks over at Seoul Eats raise the bar one level higher with this kimchi costume.

The back panel is a thoughtful touch, too, and would save an endless evening of having to explain what you are to those who don’t immediately get it.

In terms of costumes that require no crafting, only buying, this is an easy and endearing winner.  Some men can pull it off, too, if they dare to try to match the fierceness.

It can, however, be a little cliche: it’s a rare Halloween in Korea when someone hasn’t gone the ajumma route.  Still, you could always take it one step further and add a horror element.  Ajumma zombie?  Vampire?  Werewolf?

Note: A few comments have indicated that this selection might be viewed as insensitive, but to clarify, I am simply pointing out that there is a long history of foreigners dressing up in the much beloved ajumma fashion style, which I do not believe typifies an entire ethnicity.  Apologies for any offense.

While I admit this version is a little overambitious for many, bibimbap, the pride of Jeonju, is undeniably Korean.

I have seen simpler versions of this idea in the past, often with random vegetable likenesses taped to the wearer and an egg “hat” to top it off.  Once again, people will delight in pretending to spoon you up all night.

Imagine going more than a day or two around Korean kids and not hearing the ubiquitous “KAWI BAWI BO!” It’s a Korean staple for sure.

No matter which you are, though, you still get the fun of posing in kill-or-be-killed positions with your handy cardboard competitors.

You don’t have to believe this concept to own it, and there are a dozen different ways to play it.  Sexy, horrifying, funny… with folding fans, electric, or both.  It might take people a few seconds, but it’s sure to get a laugh.

Dress as one of the Kakao Friends or any one of the popular stickers from Kakao talk.  You’re likely to have trouble even making it down the street without someone snapping a picture (or wanting a photo alongside you) every half-meter or so.

If people can go to poop-themed cafes, eat poop-shaped bread, and warm their hands with poop-shaped hand warmers, a poo Halloween costume is not that much of a stretch in Korea.

Of course, to really fit with the style of the times you would need to cute it up a bit.  Perhaps some googly eyes or rainbow sparkles?

What other extremely Korean Halloween costumes have you seen?  Any you’re planning to go for this year?  Let us know in the comments, and may the spirit of Korean Halloweens past live on!