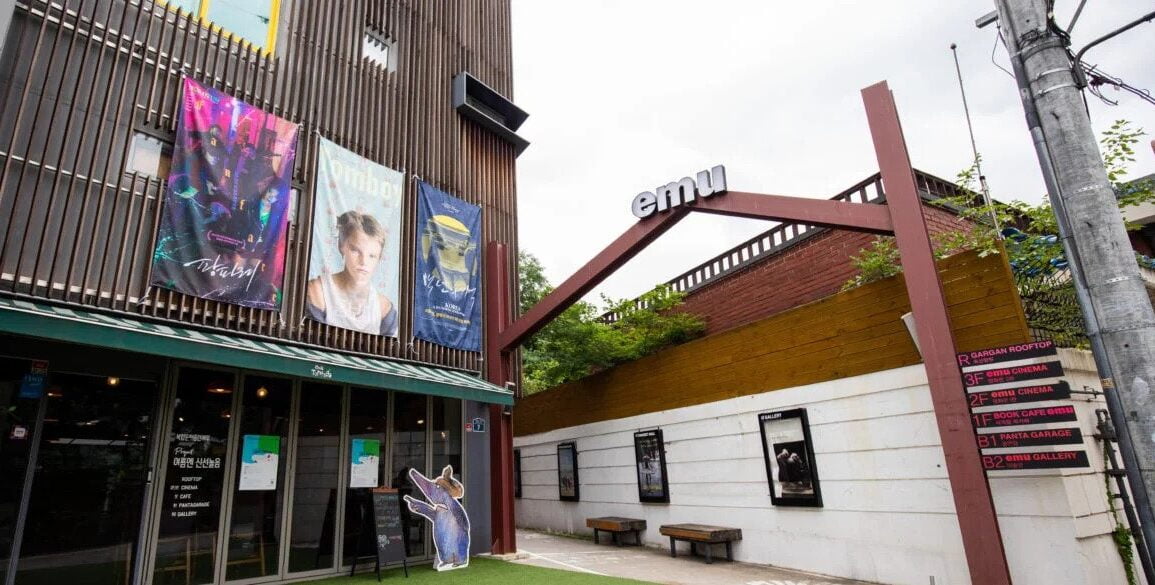 New movies are once again appearing in South Korean movie theaters, though spectators remain understandably ambivalent about going to such crowded spaces with coronavirus still all around us. But those willing to try a more offbeat theatrical experience away from the big blockbusters may find a cozier, safer space at Emu Cinema. Founded in 2015 as an extension of Emu Art Space, Emu Cinema shows independent English language films, Korean films (sometimes with English subtitles) and even films in other languages, albeit with Korean subtitles.

Emu Cinema as well as Emu Art Space are located in an alley next to a giant wall that separates the nearby trendy neighborhood from the Seoul Museum of History and the Jajeongheon annex of Gyeonghui Palace. The four story building proudly boasts a gallery, pub, and cafe. There’s also a bookstore connected to the cafe on the first floor and a rooftop event space.

Emu Art Space predates Emu Cinema, with a gallery in the second basement and a music space in the first basement. Emu Art Space takes its name and inspiration from the fifteenth century Dutch philosopher Erasmus, abbreviating his name as necessary.

It’s a chill facility, as artistically cinematic in architectural construction as the art it houses. Emu Art Space itself, as well as much of its surrounding picturesque neighborhood, featured in the recent Hong Sang-soo movie “The Woman Who Ran,” which won the Silver Bear at the Berlin International Film Festival. The whole facility is a hidden gem of Seoul that’s well worth a visit.

July would be an especially good time to give it a try, as all movies are discounted ₩6,000 throughout the month. The typical price is ₩9,000, so that means ₩3,000 tickets! The Korean movie Fanfare will be playing this week with English subtitles at 3:00 on Saturday. “Adam,” “Bombshell,” and “The Miseducation of Cameron Post” are other movies that will be available throughout the weekend.

For more info, visit emuartspace.com. Their screening schedule is in English and can be found here.

Have you ever visited Emu cinema? Leave a comment below!