Why Are Korea and Japan In A Trade War? 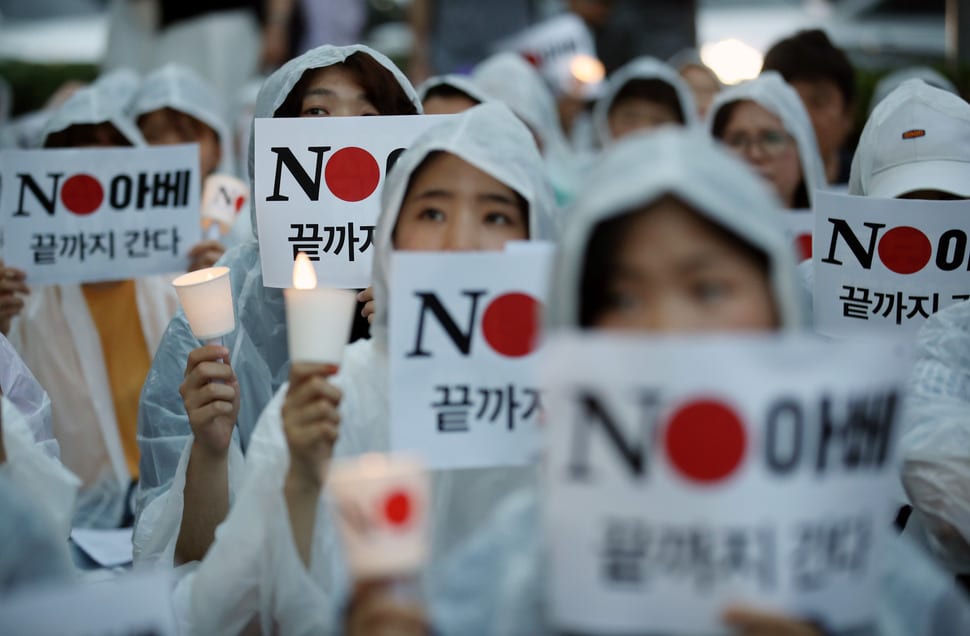 The signs of a trade conflict between Korea and Japan have been obvious for some time. Take a walk down a street in any business district and you’ll see pictures of Japanese products crossed out in red. The Korean boycott of Japanese products started in early July, and it has only grown since then. Tensions between the two countries have always simmered to varying degrees for historical reasons, and sometimes it’s hard to know what set off a round of protests or angry sentiments. As it turns out, the most recent flare-up is a combination of factors both old and new.

Back in October of 2018, a Korean court issued a landmark decision ordering Nippon Steel and Sumimoto Metal Corporation to compensate four South Koreans for forced labor during World War II. The ruling seems to have sparked similar decisions, and in November 2018 a Korean court ordered Mitsubishi Heavy Industries to pay five women 100 ~ 150 million won. In a separate ruling, the same court then ordered them to pay six men 80 million won for forced WWII labor. The suits were filed in 2005 and 2004 respectively and worked their way to the Korean High Court, which upheld the lower courts’ decisions.

These are hardly the only disputes between the two countries. Issues such as acknowledgment and reparations for Comfort Women have roiled relations between Korea and Japan for decades. But what makes the Nippon Steel and Mitsubishi rulings potentially far more damaging is the real possibility of asset forfeiture by private businesses. Because these suits are against Japanese companies, the plaintiffs could file motions to seize these companies’ assets if they refuse to comply with the court’s orders. Japan clearly sees this as an escalation in the long-standing territorial and colonial-era disputes. Since last year Japan has repeatedly voiced its disappointment with the court’s decisions, and there is no sign that any of these companies plan on paying.

The 1965 Treaty: The Source of the Problem

Before we go any further, we’ll need to back up to the longest standing point of contention between the two countries in their modern relationship: the 1965 treaty to normalize diplomatic relations between Korea and Japan. It is the foundation for Japan’s position. The treaty required Japan to pay South Korea about 500 million US dollars (about 600 billion won) in loans and aid. According to the wording of the agreement, this would have settled all complaints and claims between the two countries. A January 2005 Korean government disclosure of documents showed that during treaty negotiations Japan offered to compensate individuals, but the Korean government refused, opting instead to handle individual complaints from its Korean citizens on its own. The Japanese government refers to this agreement each time there is a claim or complaint about Japan’s behavior as it relates to Korea, be it Dokdo, history textbooks, or shrines to fallen soldiers. South Korea usually claims that the 1965 treaty was never meant to cover individual complaints. The 2005 documents do however shed a little light on why Japan consistently insists that all debts have been paid.

Nevertheless, the Korean High Court thinks the treaty at the least does not prohibit Korean individuals from seeking compensation from Japan or Japanese companies during the colonial period. It is in this light that all subsequent disputes and tension should be viewed. Regardless of who is right, the two countries’ opposing views of the 1965 treaty have led to decades of mutual suspicion.

Sanctions: A New and Scary Kind of Diplomacy

A number of countries, including the US and China, have recently imposed tariffs and trade sanctions as a way to punish countries, or extract diplomatic concessions and favorable trade deals. Because of the potential for negative economic effects, these tactics aren’t often used in diplomacy, unless they have fairly broad international support. When they don’t, they can lead two aggrieved parties into an escalating “tit for tat” that usually ends badly.

This is why the Korean Supreme Court’s recent decisions are so potentially explosive. Japan sees the latest Korean court decisions as an attempt to circumvent settled doctrine, which they believe was further settled by instances such as the 2015 agreement to apologize and pay 8.3 million dollars (10,078,856,000 won) to Comfort Women. The prospect of companies having to forfeit assets is seen by Japan as a monumental raising of the stakes in a dispute that they believe has nothing to do with business or trade relations.

So, in July, Japan imposed restrictions on exports to South Korea of several chemicals used by Korean tech companies to make semiconductors and smartphone screens. This doesn’t mean that Korea can’t import any of these materials, but they do have to file for permits to import them. This will likely lead to delays in production and possibly disrupt global supply chains. The Abe government took South Korea off of its whitelist of trading partners, citing concern over South Korea’s import and export controls as the reason for the sanctions.

And this is where it’s important to read between the lines. Japan produces the vast majority of the world supply of these chemicals, and Korea produces about half of the world’s semiconductors and about 90% of the world’s smartphone screens. Given the dependence of one on the other, it’s easy to see why most Koreans, and even economists, see the sanctions as political retribution. It’s pretty clear to most observers that this is indeed payback for the Supreme Court’s decision to force Japanese conglomerates to compensate South Korean laborers.

South Korea Responds with a Boycott

We will never again lose to Japan.
We have come this far today by overcoming countless hardships.
…
Just as we have always done in the past, we will in fact turn adversities into opportunities to leap forward.
-2019.8.2 Emergency Cabinet Meeting pic.twitter.com/L1vAXOeqm2

The potent mix of economic harm and historical grievance has created a toxic atmosphere between the two countries. Polls in Japan show over 70% approval for Abe’s sanctions, a fact that can only inflame South Koreans’ sense of injustice. The boycott started on July 15 when a group of small business owners protested in front of the Japanese Embassy. It has only grown since then, to the point that E-Mart saw nationwide sales of Japanese beer plummet by 62.7%. A video of a Korean man in Incheon smashing his Lexus went viral in a day. Other Japanese products, particularly cosmetics, are feeling the pinch, and all indications are that the boycott will only expand.

Where Do We Go From Here?

The traditional complaints in Korea and Japan’s muddled history are well known to expats living on the peninsula. They’re near the surface in any exchange or deal that the two countries make. But this chapter is significantly different. Since the normalization of relations, never has a political problem infected the countries’ trade relationship, where retribution could lead to serious economic problems. And this is exactly what we see now. While it is true that Korea seemed to have set off the latest round with a series of court rulings against Japanese firms, Japan only upped the ante. Whether or not Korea’s boycott elicits a more pointed or dangerous reaction remains to be seen.