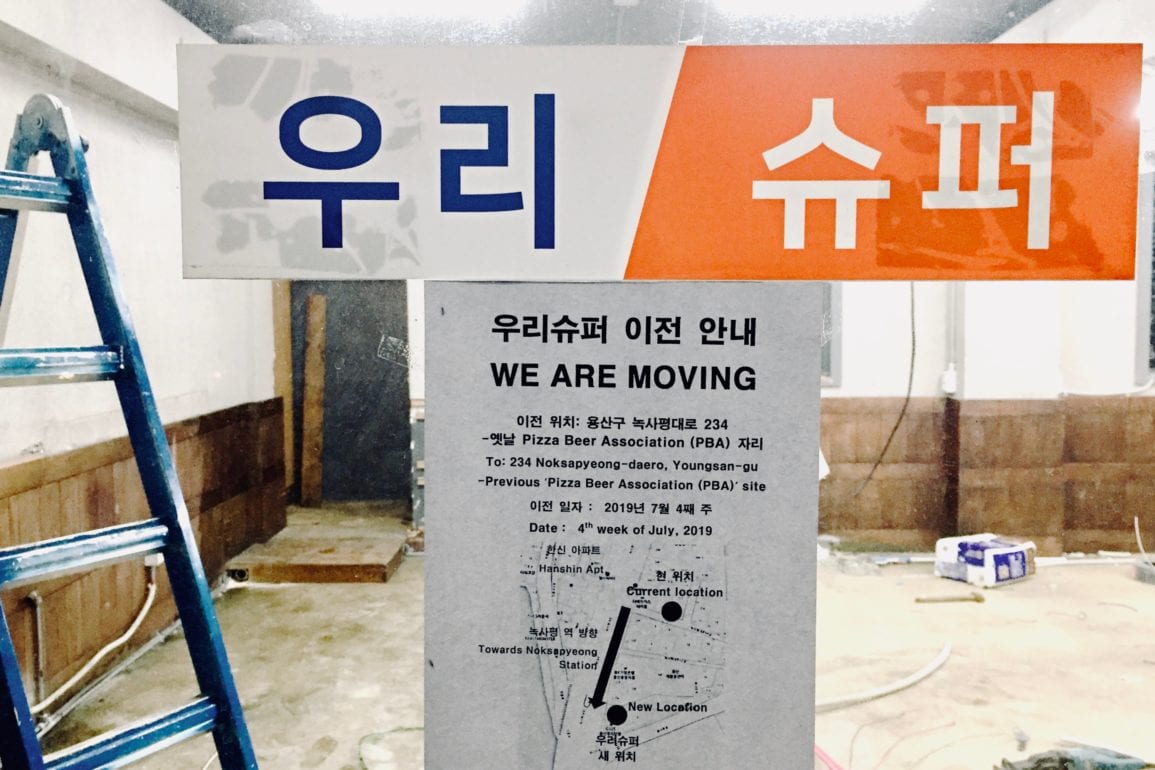 Anyone who has dipped their toes into Korea’s layered and burgeoning craft beer scene is likely aware of or a regular visitor to the back alley area of Noksapyeong, commonly known as “craft beer alley”. If you’re hip to the scene, you might be aware of the definitive – and perhaps the oldest – hub there that sparked a craft beer revolution in Seoul. One that has introduced Korean beer geeks to imports seldom seen anywhere else in Seoul, and whose ingenuitive approach to selling beer in Korea has inspired the creation of other bottle shops in the city. The title of ground zero in craft beer alley belongs wholly, and in my mind completely justifiably, to Woori Super (우리슈퍼).

If you aren’t hip to the beer geek culture of Seoul and perchance just stumbled past its exterior on a booze-fueled night out, you might mistake it’s 80s signage aesthetic for just some little mom and pop corner shop selling stale cigarettes and random foodstuffs paraphernalia. Yet it is something of an entirely different nature – something beautiful, wholly unique, and almost archetypally Korean to the millennial crowds that frequent it, foreigner or otherwise.

Despite Woori being a highly successful bottle shop and one that is deeply ingrained in Korea’s craft beer culture, it has not been immune to pressure from local landlords increasing businesses’ rent prices in the Noksapyeong area. A few weeks ago when visiting Magpie, a local Noksapyeong brewery next door to Woori, I noticed a piece of paper tacked up on the entrance door of the bottle shop saying that the current location would be closing, and the shop relocating elsewhere.

It immediately struck me that this is not an isolated incident in the Noksapyeong area. Many regulars of the town have likely noticed a large number of local businesses that have closed down and disappeared from the town. To mention some names: Bar Tiger, Pizzarium, various chocolate and cake shops, a takoyaki place, a meatball place, a Japanese pancake place, etc. Initially, these closures being so close in time seemed a random coincidence to me; a natural part of a capitalistic marketplace, and related to a lack of demand from customers. However, the issue seems to go a bit deeper than that.

I recently had the chance to talk a bit with the owner of Woori when stopping in to grab a few cans of beer to enjoy on the shop’s patio. Seeing that she was already in the process of emptying the storefront and moving over products to the new location, I inquired about how the move was going. In clearly downcast tones, she conveyed how upsetting it was to her that she was having to leave her home location after more than a decade. Asking about what prompted the move, she told me how the landlord of the property had been increasing her rent, and a recent price demanded was just too much, despite the success of the store.

The Noksapyeong area seems to have fallen within a bit of a perfect storm, creating a rent battle between owners and landlords through the combination of a few factors: increased minimum wage, a downward trend in visitors to the area, and increasingly high rent demands.

An employee at Mapgpie told me that he believes some local businesses are encountering hardships in balancing the higher minimum wage rate for employees with their increasing rent payments. Fewer people are frequenting the area, so business profitability is experiencing a decline across the neighborhood. Although the Magpie employees I spoke to weren’t knowledgeable about their store’s rent figures, they could confirm that they were feeling pressure from landlords just as other local businesses are.

In my conversation with the owner of Woori, I inquired about the origins of the store. She told us that she had initially opened Woori as just a normal neighborhood supermarket in the Noksapyeong area well over a decade ago, supplying groceries to locals. What caused the shift from a “mom and pop” style grocery store to a craft bottle shop was a bigger, corporate grocery store opening in the area.

People began going to the new store instead, and she was unexpectedly thrown into a position to adapt. She told me that a friend of hers had suggested she move from a general store to something specialized. Using her knowledge of import processes in Korea, she turned her eyes on craft beer. The rest is history, and the shop is a landmark of its kind; ingenuitive and driven by necessity, it carved a path for bottle shops that have since followed.

Anyone familiar with Korean businesses in their town or otherwise knows that many Koreans see the landscape as a series of revolving doors: places open, some succeed and flourish; others miss the mark and close quickly. If you live in one area long enough, you’ve seen how many shopfronts are a constant flux of signage and products over even the span of a few months. This is arguably an inevitable consequence of a capitalistic, demand-based market. Yet in the case of Woori Super, there seems to be something amiss in a store having to move from such a renowned location, despite the success and reputation of the business.

Perhaps greedy landlords are the culprit. Maybe there’s a slew of economic forces at hand that I’m too far outside the realm of to comprehend. Maybe it’s as simple as change being a natural part of time’s progression. Whatever the case may be, I feel the instance of Woori is an opportunity to remind ourselves of the importance of local businesses, and that even in the ever-changing landscape of Korea’s storefronts, a community should respect their historical impact within that community – whether you’re a customer, competitor or landlord.