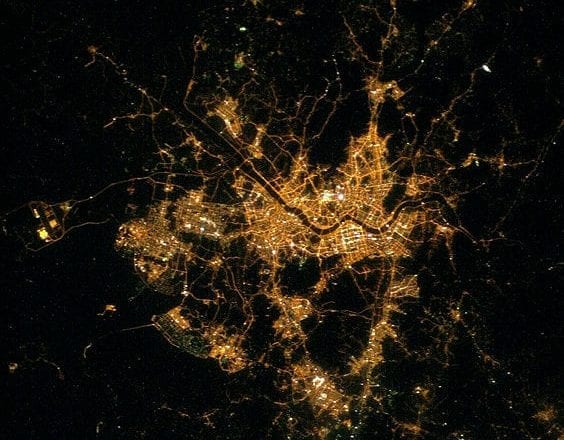 South Korea has experienced drastic economic growth in the years since the Korean War ended. Although Korea is now a world hub for technological hardware advancement, there are still a few areas in which they inherited shoes bigger than their own feet. In 2003, when nearly 200 people tragically perished after a Daegu subway station went up in flames, the government agencies dealing with national disasters at the time were still using outdated two-way radios.

After criticism for not having digitized their communications systems, the government sought ways to improve public safety network with pilot projects. However, 11 years after the subway fire, the Sewol ferry disaster again “brought attention to the urgent need for establishing a nationwide public-safety broadband network for sharing information and communicating among public-safety agencies,” said Dujeong Choi, Telecommunications Technology Association (TTA) of Korea.

On 16 April 2014, the South Korean ferry Sewol sank off the south-west coast. The tragedy, among the country’s worst peacetime disasters, had left a total of 304 people dead. Ferry operators and regulators who oversaw its operations were condemned, along with President Park Geun-hye’s administration for its disaster response. When the Sewol ferry capsized, response efforts were also hindered by a lack of interoperability from responding agencies.

Prompted by these tragedies to improve the welfare of the people, the South Korean government is to complete the nationwide deployment of the broadband network dedicated to public safety using Long Term Evolution (LTE) technology by 2020. Under the 1.7 trillion won ($1.5 billion) LTE-based public safety network (PS-LTE) project led by the Ministry of the Interior and Safety, the construction of the PS-LTE network is divided into three phases, focusing first on the rural provinces then extending the network to urban areas.

The government has designated specific areas for KT Corporation, South Korea’s second-largest commercial wireless operator by subscriber numbers, and SK Telecom, with the largest number of wireless subscribers, to construct the national disaster safety communications network. As South Korea’s two commercial carriers have bid against one another for the public safety LTE pilots in three sections, KT had won the tender in 2018 to construct government-led public safety networks in the major areas of the country. While SK Telecom was also chosen as a preferred bidder, it has been selected to build the networks in fewer areas.

One of the major advantages of PS-LTE networks is data connectivity. PS-LTE can transfer large amounts of data instantly, allowing high-quality images and video to be sent enabling the use of various applications such as live streaming during emergency situations or mapping software for locating or directing mission-critical assets or concerns. With many different networks, inter-agency communication proved difficult. LTE provides a way to achieve faster responses by creating a unified network that satisfies the requirements set for public safety networks such as resilience, security, and quality of service.

Another benefit to PS-LTE network is the high capacity of information delivery. When a large-scale emergency occurs, large numbers of emergency services personnel may need to be coordinated simultaneously, in a quick and effective manner. Reliable and accurate communications between devices are essential. When sending large amounts of content, including HD voice, video or high-resolution images, with limited cell capacity, Samsung’s mission-critical push-to-talk (MCPTT) solutions leverages eMBMS broadcast technology to transmit data to thousands of users within range of a given LTE base station. This method allows information to be rapidly transmitted during crisis situations, without slowing down the network.

In the past, mission-critical organizations have operated their own voice-oriented networks on a variety of frequency bands and a variety of technologies that have prevented the exchange and use of information with each other. Therefore, the Korean government has sought to “deploy unified/integrated nationwide public-safety network so that every mandatory agency can communicate with each other,” Choi of the TTA said. With eight total mandatory user organizations for the nationwide public-safety network, including police, fire, EMS, coast guard, military, local administration office, electricity and gas, the network is to always be operational, rather than just during emergencies and is designed to provide full coverage to the nation.

On May 2019, South Korea’s Samsung Electronics signed a contract KT to expand PS-LTE network solutions based on the latest standards for ten major metropolitan regions in South Korea by 2020. The two companies also claim to be delivering the world’s first Narrowband Internet of Things (NB-IoT) service through a PS-LTE network.

The NB-IoT service is a contract expansion between Samsung and KT, who have worked together on two other PS-LTE projects, one being the world’s first PS-LTE network through Gangwon province in 2016, and the 2017 delivery of LTE-Railway service for operator communications on high-speed commuter trains such as the AREX (Airport Line) and future long-distance lines.

“By acquiring innovative wireless communications from Samsung, we are able to aid in life-threatening situations where data traffic is severely congested or connection is completely out of reach,” said Yoon-Young Park, Senior Executive Vice President and Head of Enterprise Business Group at KT. “These first-of-their-kind networks help responders connect with those in need”.

Samsung said that NB-IoT will be applied to the public safety network to help prevent disasters through the use of IoT sensors deployed to sense the even the smallest size of embers or people stranded in remote areas of mountains where there is a lack of visibility. During many extreme natural weather events, communication networks often suffer outages due to damaged or disabled equipment. Samsung’s solution carries PS-LTE networks that provide the same rapid re-deployment capabilities as any other LTE network and also supports direct device-to-device (D2D) communications to ensure that services personnel can remain in contact with one another at all times, regardless of network status.

NB-IoT and D2D play crucial roles in creating a public safety network. NB-IoT service for public safety includes not only fire detection but also facility management. D2D allows direct and undisrupted communications between any two devices without traversing radio base stations or core network even in areas where base stations are not provided.

The MCPTT (mission-critical push-to-talk), a technology defined in the 3GPP standard, enables thousands of devices to be connected at once to transfer video, images, and voice simultaneously using multicast technology. MCPTT feature is mainly for group call support, broadcasting announcements, as well as private one-to-one calls.

Along with South Korea, more than 39 countries are currently in the process of implementing dedicated public safety networks, including the United States and the United Kingdom. As Samsung and other service providers have worked with governments around the world to build PS-LTE networks to deliver uniformity for various agencies to connect and communicate, this standardized, broadband, LTE wireless communications network for public service agencies could be the effective answer to urgent communication challenges of today.

Hopefully, such a solution marks a new era of communication that will provide a significant and reliable experience, without the expense of freedom, amidst the unchecked progress that has almost been deemed as desirable.