Confucius and Confucianism in Korea | History 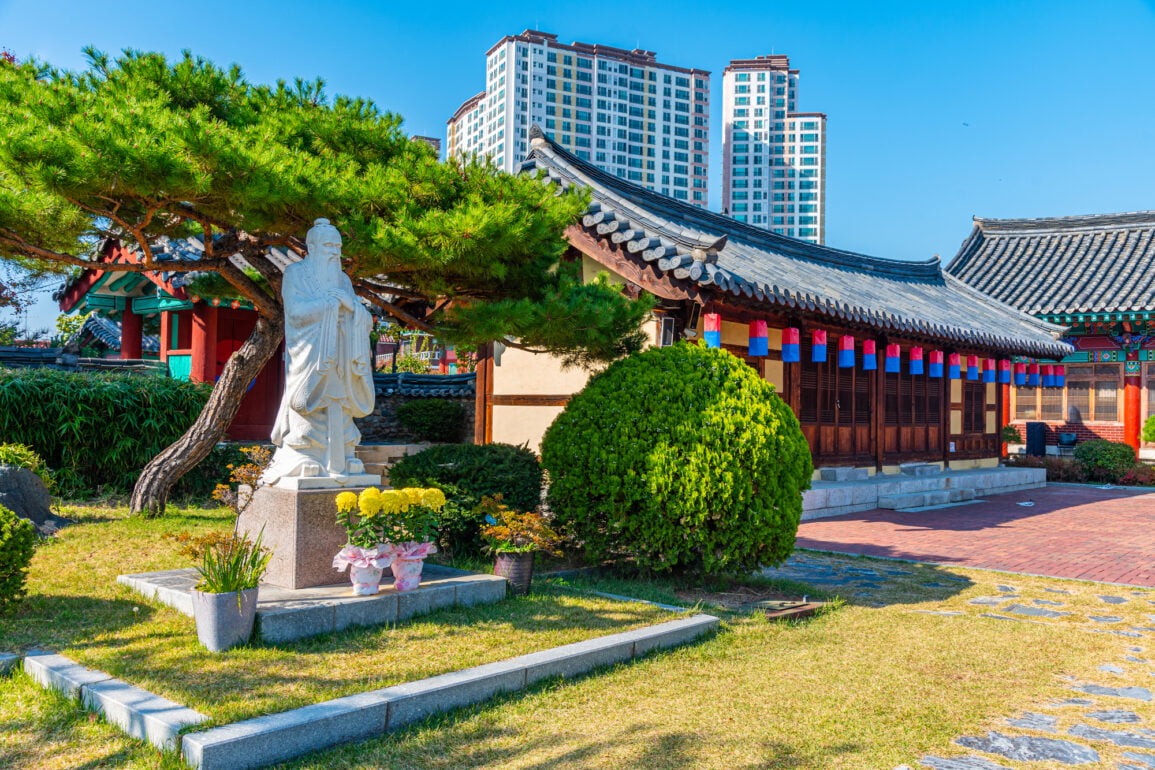 2,500 years after his death, Master Kong’s ideas continue to shape life on the Korean peninsula. Let’s dive deeper into Confucianism in Korea.

So then what exactly is it all about?  Well, the first thing you should know about Confucius is that his name wasn’t “Confucius.” That’s the Latin version of his name given to us by the 17th century Italian missionary Matteo Ricci. The man we call Confucius (551 BCE – 479 BCE) was Kong Fuzi to those who knew him, or Master Kong. His Korean name, Kong-ja (공자), retains the original meaning perfectly.

The second thing you should know about Master Kong is that he wasn’t a philosopher. He was more a chronicler, compiling centuries of historical records, literary works and philosophical treatises. He sorted through the clutter, decided what was non-essential, and organized the rest in a user-friendly way, single-handedly sculpting mountains of slush into a unified canon. Not bad, Kong. Of course, he had a few things of his own to say as well.

The sage grows up

Like his Western counterpart, Socrates, Kong was reportedly rather ugly: bucktoothed and hunchbacked with a bulge on one side of his enormous head. But this wasn’t the only reason he lacked friends as a child. Growing up, it seems little Kong was a bit of a weirdo; one of his favorite hobbies was re-enacting funerals. Legend says his mother noticed his fascination with the nearby cemetery and moved the family near a school hoping he’d begin to emulate the teachers there instead. Her gamble worked, but Kong never lost his fascination with ceremonial customs.

Kong spent his adult years vying for government jobs throughout China and felt what was needed most was just for everyone to do what they were supposed to do. In other words, if the farmers got to farming, the fighters got to fighting, and the rulers got to ruling, things would be better for everyone. Like most conservatives today, he longed for the mythical time when things were good. Thus, he assembled histories to show just how much better things had been and detailed ancient rites to explain how to re-create such order.

The philosophical fundamentals of Confucianism

The basic principles he emphasized were yi, li and ren. Roughly, these represent justice, ritual and benevolence. Yi isn’t merely courtroom justice though; it’s having a sense of justice in oneself, a tendency to want to do good, as opposed to being a sociopath. This is the foundation of everything else, but it’s inherent—you can’t teach someone to have a heart.

Ritual, or li, builds on justice and is more than just knowing what to do at a funeral or wedding. It involves all manner of etiquette and is the reason you have to conjugate your verbs differently when talking to someone’s mother in Korean.

But such formality has a deeper side too as a vehicle for ren, or all the things about being human that makes being human beautiful. You could sum it up with “love,” as indeed many have. The importance of ritual in achieving ren lies, for example, in knowing how to behave not only when you’re at the dinner table but when someone tells you their father just died. Ritual, therefore, is so fundamental to creating ren that Confucianism is often referred to as li-jiao, or the religion of ritual, which is still its name in Korean today (유교 yugyo).

But our friend Kong wasn’t seeking ren merely for its own sake. In his Analects, we find him saying, “Do not unto others what you would not have them do unto you.” This is known as shu, or “reciprocity,” and is the most fundamental principle of Confucianism (ren exists to create shu).

You’ve probably heard Koreans talk about jeong—well, this is where it comes from.  It’s the idea that humans are inescapably social creatures, and that social harmony is the only thing worth striving for. Kong no doubt would have balked at Western philosophers who asked questions such as “Do I exist?” or “What is the meaning of death?” For him, society was everything, so he put the greatest emphasis on what he felt was the very glue that held it all together: relationships.

One thing that bothers many non-Koreans living here is the sometimes excessive respect paid to the opinions and decisions of elders. This is undoubtedly Kong’s influence, but his aims were to generate as much shu as possible by keeping society humming along smoothly. Remember, things work best when people do what they’re supposed to, and as a teacher he saw relationships in terms of the parent and the student (one protects and guides while the other obeys and learns). He boiled all relationships down to five basic interactions: father-son, husband-wife, older-younger brother, friend-friend, and ruler-subject. Though admittedly male-centered constructs, they provide strong organizational structure, as the comparative harmony and efficiency in societies like Korea and Japan can attest.

Despite the good sense he was making, Master Kong’s ideas were not an overnight sensation. However, they eventually caught on with people in power and began to spread. The ancient text Samguk Sagi mentions the construction of a Confucian academy on the Korean peninsula as early as 372 CE, and the Silla Kingdom is known to have sent some of its subjects to study Confucianism in present-day Xi’an.

In 958 CE, King Gwangjong of Goryeo set up the civil service examinations known as gwageo. It was around this time that Neo-Confucianism developed, which combined Confucianism with Buddhist and Taoist teachings and put particular emphasis on the nature of li. This new system of thought caught on with the ruling classes who admired its deep metaphysical aspects, but also appreciated its practical application in helping keep the lower classes in their place. Ultimately, it was Neo-Confucianism that became the reigning philosophy of Korea’s Joseon Dynasty.

After the Meiji Restoration in Japan, the Cultural Revolution in China, and the Juche ideology in North Korea, South Korea today is perhaps the only place left that is still experiencing what Master Kong dreamed about 2,500 years ago. We are witnessing in Korean society today a kind of philosophical experiment first implemented by Joseon kings and reinforced over time.

At one time, civil service exams in Korea consisted solely of demonstrating a mastery of the classic Confucian texts and as the importance of college entrance exams demonstrates, this devotion to scholarship survives today. As Zen monks pay attention to form in the pursuit of enlightenment, so Confucian scholars devote themselves to study in the pursuit of social harmony, and the focus on education is one aspect of that.

This enormous debt is paid homage in many ceremonies here but also, for example, in the currency: the W1,000 and W5,000 banknotes feature Confucian scholars Yi Hwang and his rival Yi I, respectively (to find out more, see the list of sites below), while the back of the W1,000 note depicts the Confucian Academy in Andong, and more recently the W50,000 note featured Shinsaimdang, mother of Yi I and paragon of Confucian motherly values.

But if you’re interested in a more active representation of Confucianism in Korea today, try a visit to Munmyo, Korea’s principal Confucian shrine located on Sungkyunkwan University campus near Hyehwa Stn. (line 4) in Seoul. Built in 1398, this shrine boasts breathtaking architecture, and rituals are held each spring and autumn commemorating Korea’s glowing Confucian past. To explore more ceremonies and sites, take a look at the lists below.

This festival takes place on May 5th according to the lunar calendar. In addition to traditional activities like swinging and dying your hair with grapes, solemn ancestral rites are held in Gangneung.

On Foundation Day each year, a special ceremony is held at Chamseongdan, the altar is said to have been made by Dangun, the legendary founder of Gojoseon. Chamseongdan is located on Ganghwa Island in the municipality of Incheon.
—

Gangneung Confucian School (강릉 향교)
At this school, which today is National Treasure #214, devotees of Confucianism focus on their studies and hold memorial services for their ancestors.

Gyeongju Confucian School (경주 향교)
This school is an attempt to revive the traditional culture and ethics of the seonbi—Confucian scholars.

Ojukheon (오죽헌)
This museum is dedicated to Yulgok Yi I (율곡이이). Yi I shows up on the W5,000 notes, while his mother Saimdang Shin appears on the W50,000 bill introduced two years ago.

Sunbichon (선비촌)
Got a kid who just won’t sit still? Send him to a camp at this school and he’ll come back a perfectly trained little Confucian.

Have you experienced or witnessed the influence of Confucianism in Korea? Let us know in the comments!