The Best Travel Spots to Enjoy Oyster Season in Korea 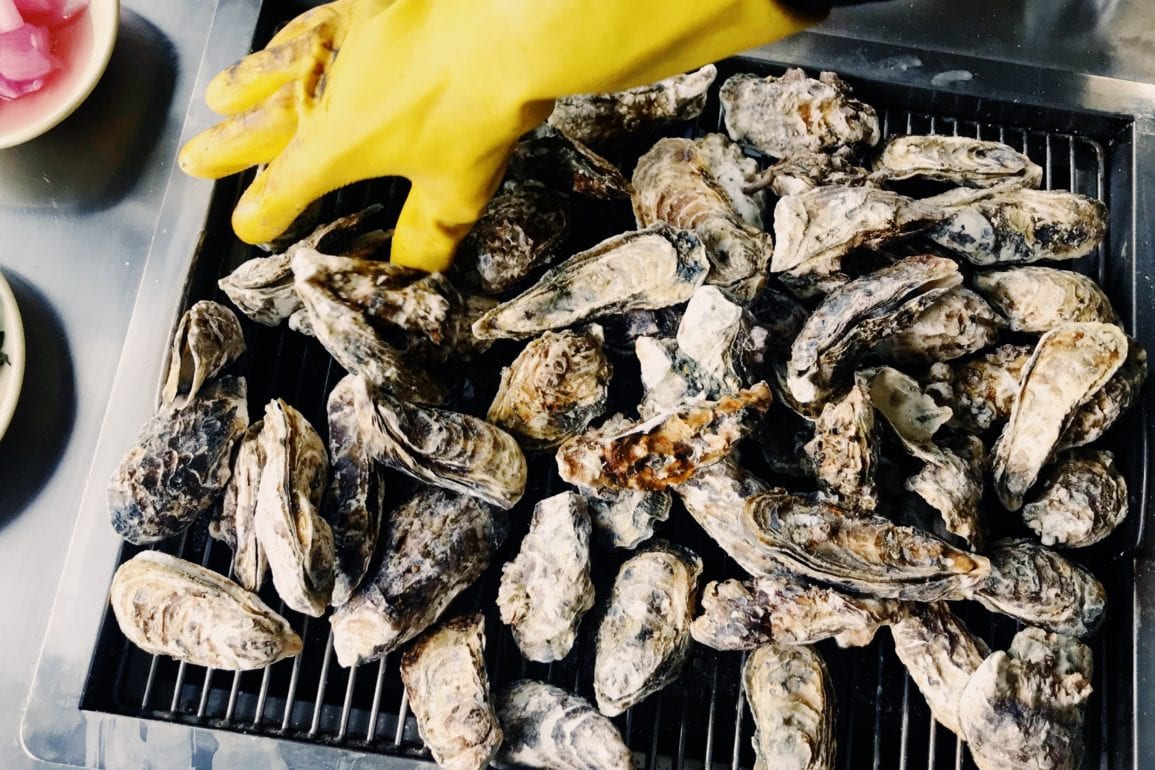 There’s something different about oysters.  Something special. Something clams and scallops and cockles just don’t have:  That mysterious primal thrill you get when you eat them straight from the shell.  Raw or grilled, oysters are a rush. Those primordial shells, all rough and craggy, split open to reveal a world that’s impossibly smooth and lustrous.  A glistening morsel floating in brine. Plus the secret hope, however faint, of finding a pearl.

And sure, you can get a hint of the flavor and an inkling of the primal feeling at a restaurant or oyster bar — oysters are tasty in pretty much any setting.  But every winter from October through January there are two places in Korea — unlike anywhere else in the world — where you can truly experience the full flavor and primal thrill of eating fresh oysters.

The Cheonbuk Gul Danji (천북굴단지) in Boryeong is Korea’s grilled oyster Mecca, and getting there really does feel like a pilgrimage.  At some point along the way you’ll begin to doubt and ask yourself, Why exactly are we driving this long, lonely, winding road far away from even the tiniest town to an obscure spot by the sea?  Answer: Because that’s where the oysters are.

It’s a surreal and charming place, an oceanside oyster oasis that seems to have sprung up out of nowhere:  just a few dozen oyster restaurants, a parking lot, and some stalls selling snacks and sundries. The salty ocean breeze mixes with the scent of grill smoke.  In front of every restaurant are giant bins of oysters and an ajumma trying to lure you inside. Every place claims to be the best.

It used to have a more scrappy and shabby ambiance because the restaurants were just ramshackle sheds and tents huddled together as if for warmth.  But in 2018 the tents were cleared away and a cluster of permanent buildings was constructed, mainly because the tents were both freezing cold and a serious fire hazard.  (Open flames, hot coals, questionable wiring, soju, polyester walls, you get the idea.)

In a way, it was sad to see the tents go, but what we’ve lost in old-school precarious ambiance we’ve gained in comfort and safety.  Eating oysters over an open flame is plenty primal, no need to throw a fear of death into the mix.

Every restaurant has basically the same menu which on the one hand makes choosing difficult (yes, some are more famous or were on TV or do this or that a little better or differently) but on the other hand no matter which you choose you can’t really lose.  Go with your gut. Choosing is part of the fun.

Order the grilled oysters (굴구이) and steamed oysters (굴찜), put on your bib and gloves, and have the staff show you how it’s done.  Say yes to soju.

The oysters here on the West Sea are smaller and firmer with a more ocean-y flavor compared to their South Sea counterparts.  They grow in mudflats or on rocks and as the tide recedes they spend considerable time exposed to the sun and wind and develop a rich flavor.

As they grill they’ll either gently split open, pop, or explode.  So watch out. The danger of boiling brine and shell shrapnel is part of the primal thrill.

Once they’re open eat them straight from the shell either as is or dipped in gochujang or any other nearby condiment.  Then chuck the shell into the bucket with a sort of gluttonous nonchalance, and savor the sound. Say yes to another bottle of soju.

When the last oyster splits, pops, or explodes and the bucket of shells is overflowing onto the floor, you have a difficult decision to make:  stone pot oyster rice (영양굴밥) or oyster knife-cut noodles (굴칼국수).  The correct answer is probably both.  You’ve come this far, there’s no reason to hold back.

Boryeong may be Korea’s oyster Mecca but actually a vast majority of Korea’s oysters come from the South Sea.  From Jangheung to Geojedo it seems there are oysters everywhere you turn. They’re grown on ropes and exposed to the air for only a few hours a day so they’re bigger and meatier than West Sea oysters.  And because each island has different geography and water composition, the flavors too are different. If you’ve had one South Sea oyster you have not had them all.

The entire coastline is dotted with grilled oyster restaurants.  And of the many fantastic places I’m going to single out one spot in Yeosu, Jeong Woo Gul Gui (정우굴구이), because it has something unique and remarkable, something I call The Magic Contraption.

The Magic Contraption is a custom oyster grilling system designed by the restaurant’s eponymous owner Jeong Woo Park.  From now on let’s just refer to him as The Oyster God. At first glance, the table The Oyster God invented looks similar to a standard oyster grill, but underneath the table are secret inner workings surrounded by a mysterious vented metal box.  I won’t even pretend to understand how it works but I know exactly what it does.

It grills the oysters to a wonderful, deep, smoky flavor and yet — and yet! — they stay just as soft and smooth and tender as raw oysters.  They don’t toughen up. Fully cooked, roasted flavor, yet briny and succulent. It’s a miracle.

Not only that, but The Oyster God grows his own oysters in the clear waters right next to the restaurant, a small cove surrounded by verdant hills.  From your table, you can gaze out and see exactly where your oysters came from.

And if at the inevitable end of the meal you feel pangs of sadness that it’s over, don’t worry.  The Oyster God also runs an adjacent pension, so you can spend the night by the sea and then the next day for lunch do it all over again.