The New Noryangjin Fish Market: An Impasse Between Old and New 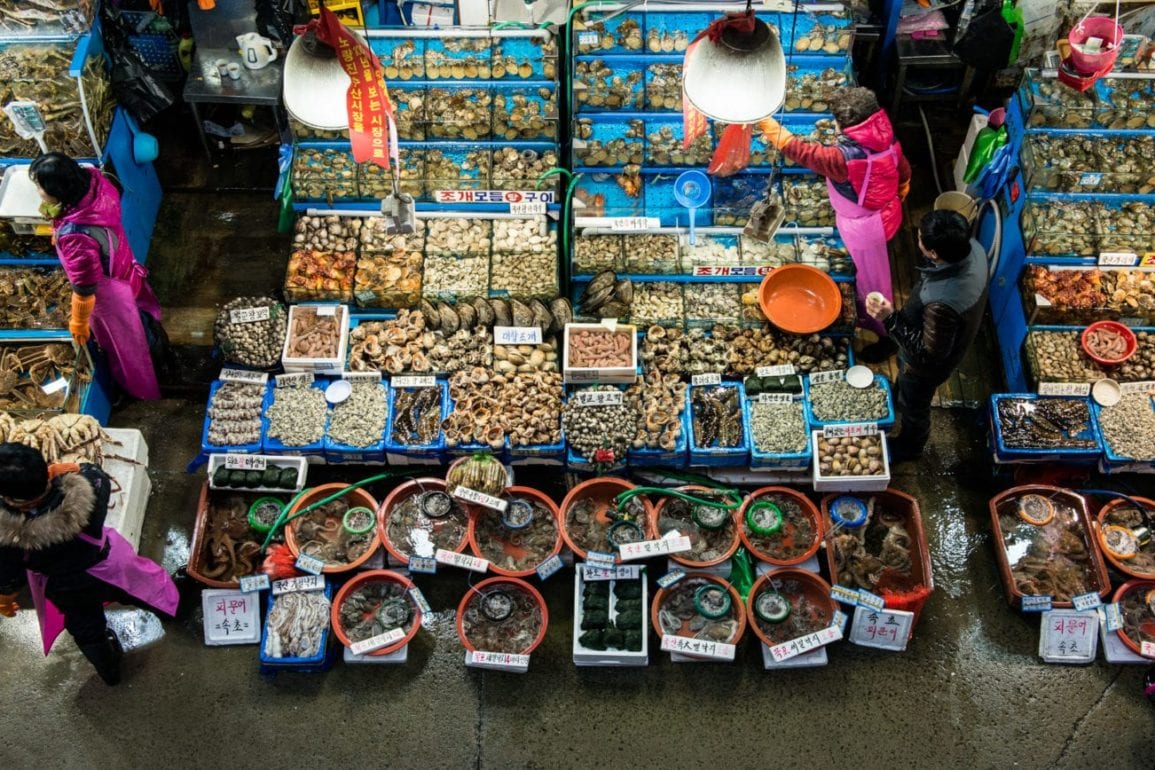 What if you built a fish market and nobody came?

Changes are coming to the Noryangjin Fisheries Wholesale Market. The largest fish market in Seoul, Noryangjin Fish Market has been in operation since 1927. Originally located around Seoul Station, the market moved to its current location in 1971. Open 24 hours a day, 365 days a year, the market retails around the clock, offering over 800 types of seafood, available to guests at wholesale prices. Whether you’re craving oysters or scallops, seabream or salmon, you simply point to the product you want, negotiate a price, and the vendor slices it up.

A quick trip upstairs to the second floor and a small fee will get you a table and side dishes in one of the handful of restaurants that line the area. Diners can choose to enjoy their fish sliced up and served raw, sashimi style, or for a few dollars more, a hot meal can be made out of the freshly caught catch after it’s grilled on an open flame. Adventurous visitors may even choose to splurge on a steaming bowl of maeuntang, a hot and spicy fish soup that is a specialty of the fish market. 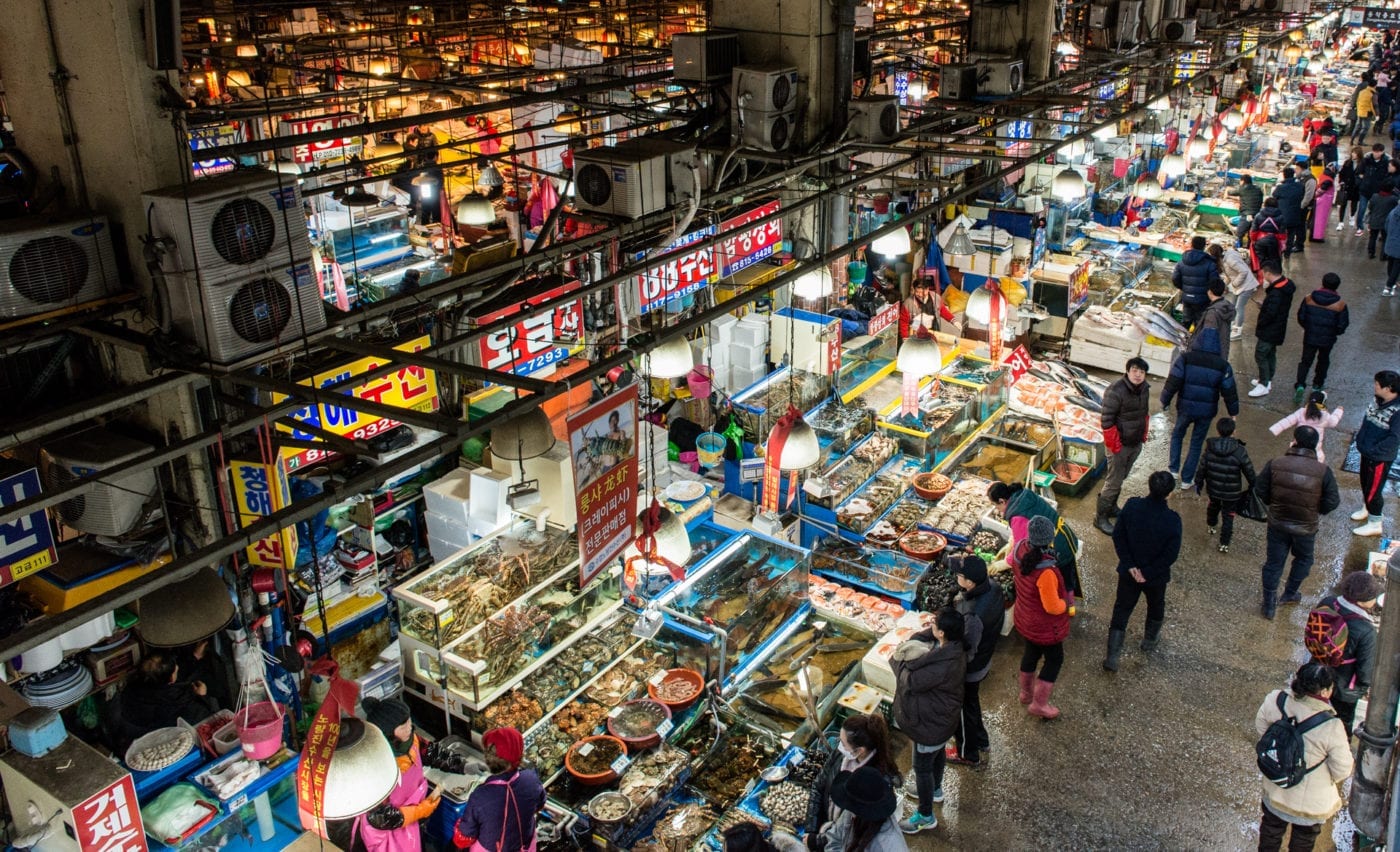 The market is a favorite among tourists and locals alike offering a unique side of Seoul, rendering it a ranking on Tripadvisor of 36 out of 667 things to do in Seoul. The market is a popular destination for visitors with a craving for fresh seafood or who simply want to become acquainted with another side of Seoul’s multi-faceted personality. On a typical day, rows of vendors wait patiently for the 200,000 tourists that course through the stalls each year. Visiting the market, the aroma of fish on ice and the excited chatter of fishmongers enveloping you, puts you in touch with a part of Seoul not found in the usual tourist traps. 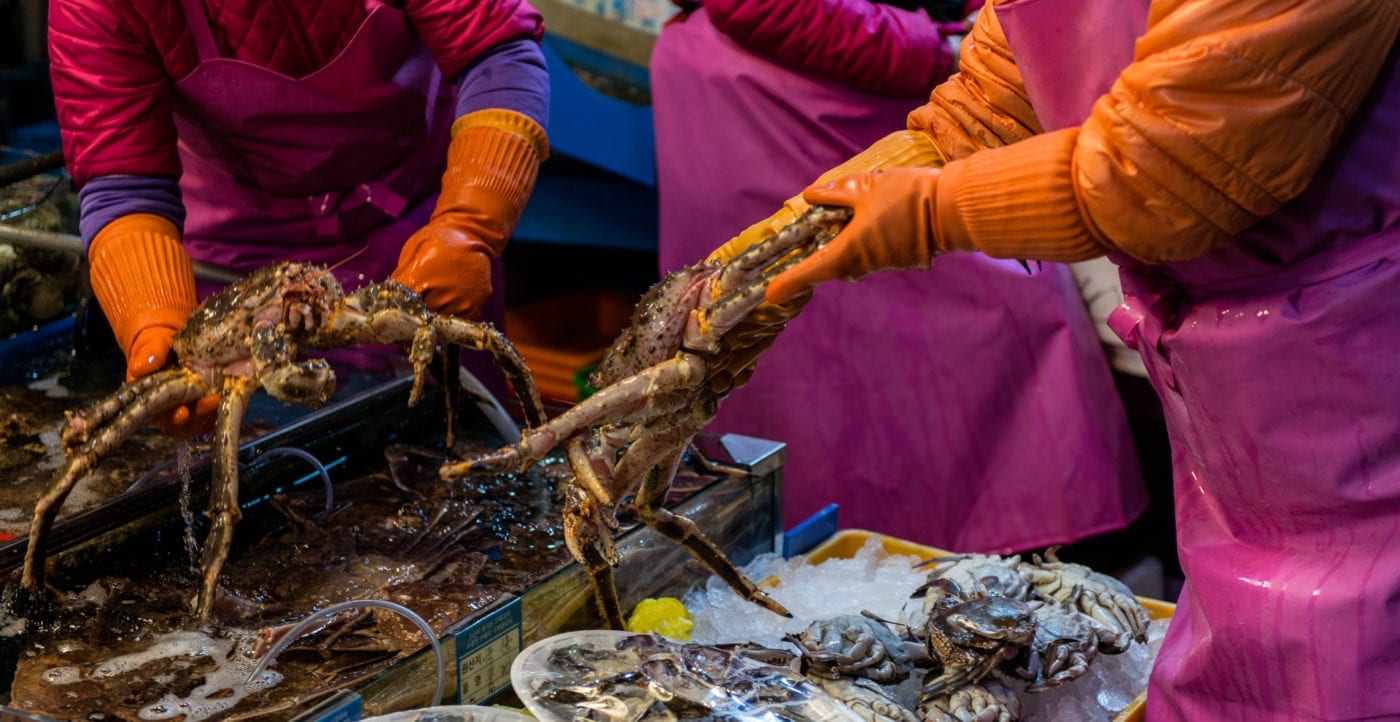 Early risers who venture to the market, still rubbing the sleep from their eyes, between 4 and 6 am arrive to the rush of the early morning auction where they witness wholesalers fight over the freshest fish of the day. An affair worth waking up early for, the auction is the heartbeat that brings Noryangjin to life. With neither the modern sheen of places like Myeong Dong, nor a throwback to the Joseon era like one of Seoul’s famous palaces, Noryangjin Fish Market is a place that fondly recalls the beginning of Seoul’s modernization. It feels historic but familiar.

But changes are afoot. 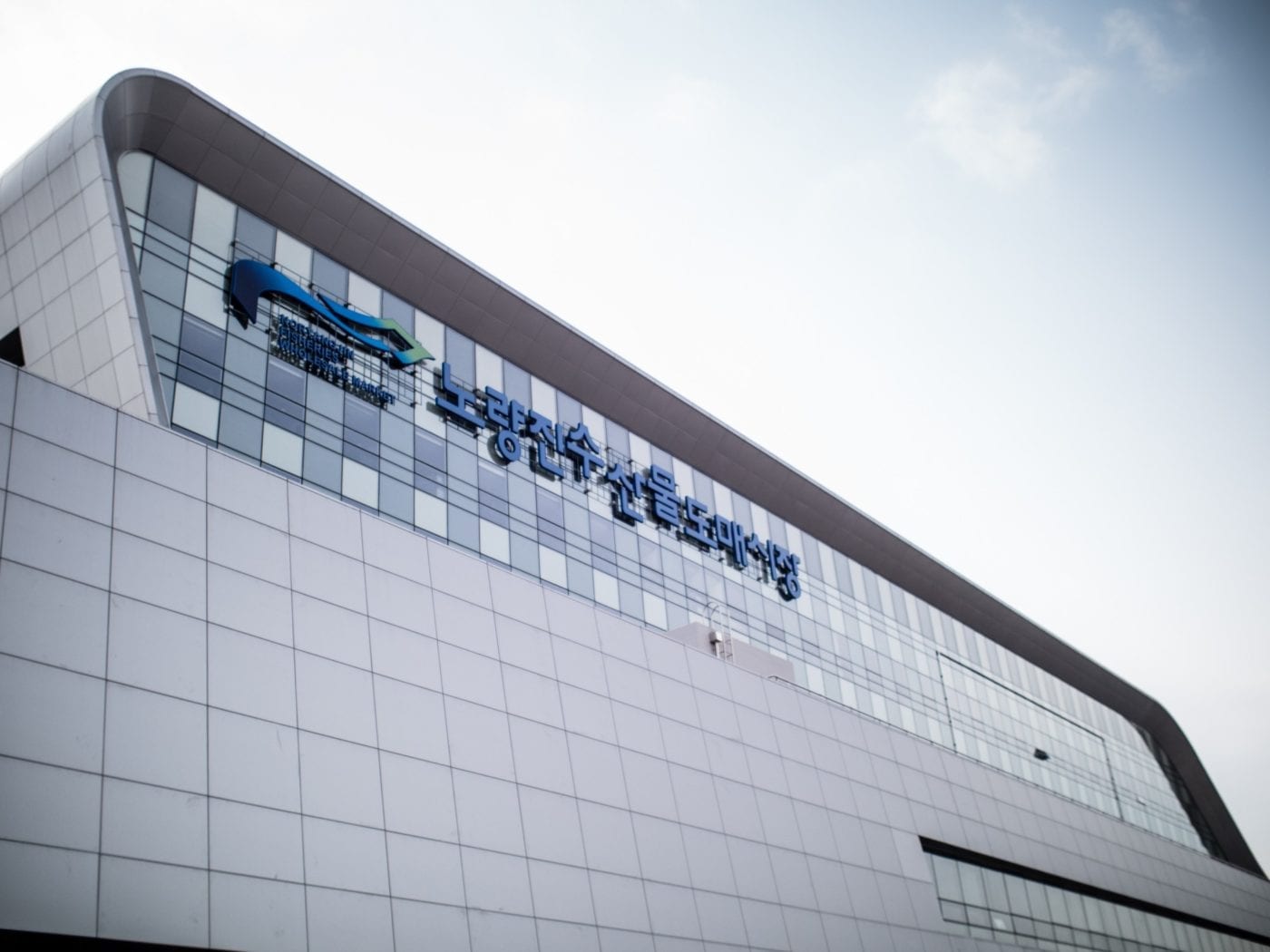 Suhyup – The National Federation of Fisheries Cooperatives – has endeavoured to bring the market into the 21st century. With a whopping budget of W520 billion ($430 million US dollars) funneled into the construction of a new building, Suhyup planned to completely scrap the original building that currently houses the fish market. Located directly adjacent to the old market, the new building, a magnificent chrome venture in modernity, towers over the decades-old decaying structure. The two juxtaposed buildings stand together as a testament to the urban transformation Seoul is constantly undergoing.

Consisting of two underground floors and six floors above ground, the new structure has been built to resemble a swimming dolphin, though the sheer magnitude makes it hardly apparent at ground level. It’s the first move of the market in 44 years, and it looks like a new era of the market may begin in February of this year. 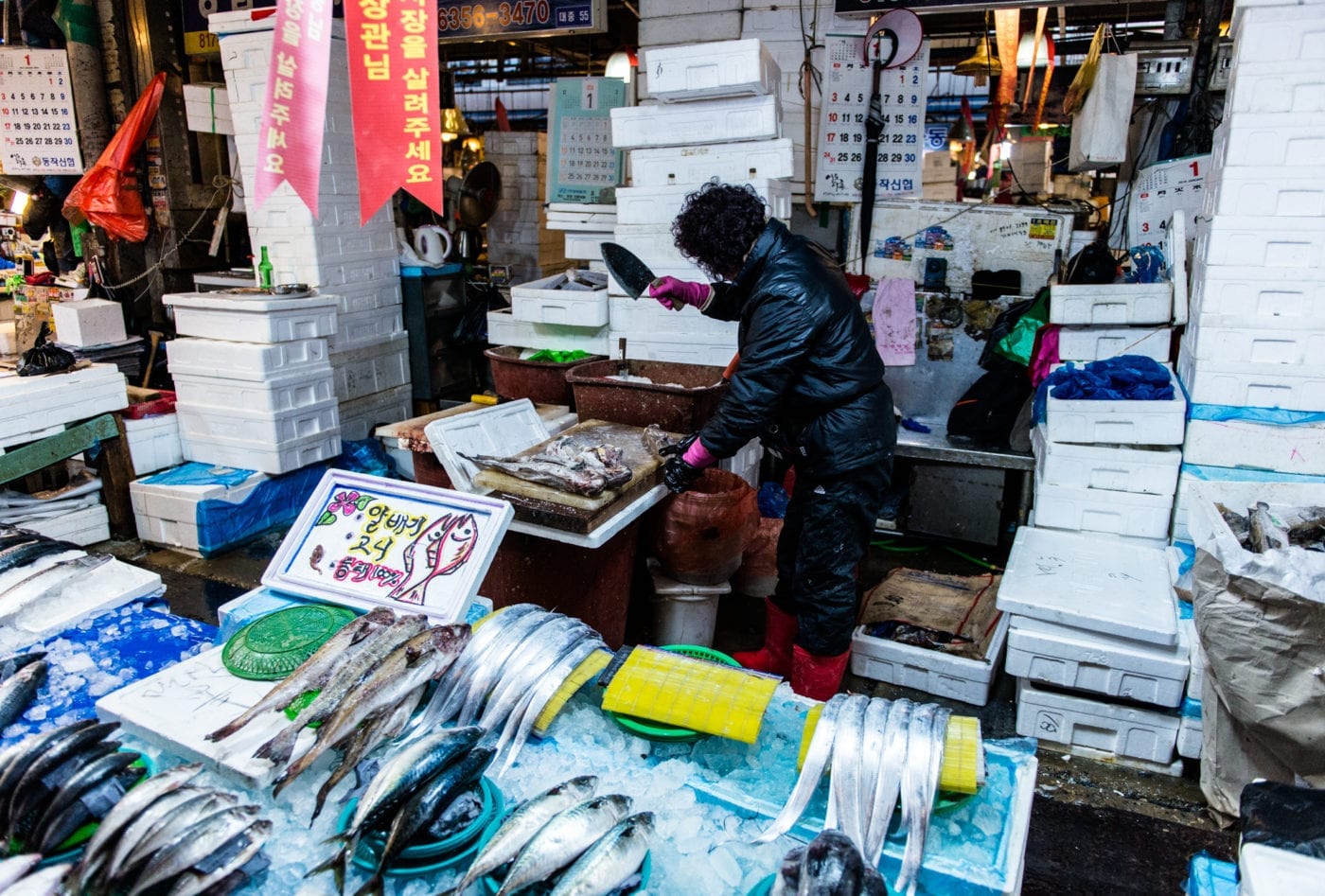 Despite the co-op’s efforts, however, vendors are refusing to move in.

I arrived at the market to find out why. It was the middle of the day, with most vendors casually chatting with each other and calling out to tourists in the hopes of landing a sale. The smell of fresh seafood, confronting at first, mingled with the cacophony of voices in the cold January air — a typical day at the Noryangjin Fish Market. 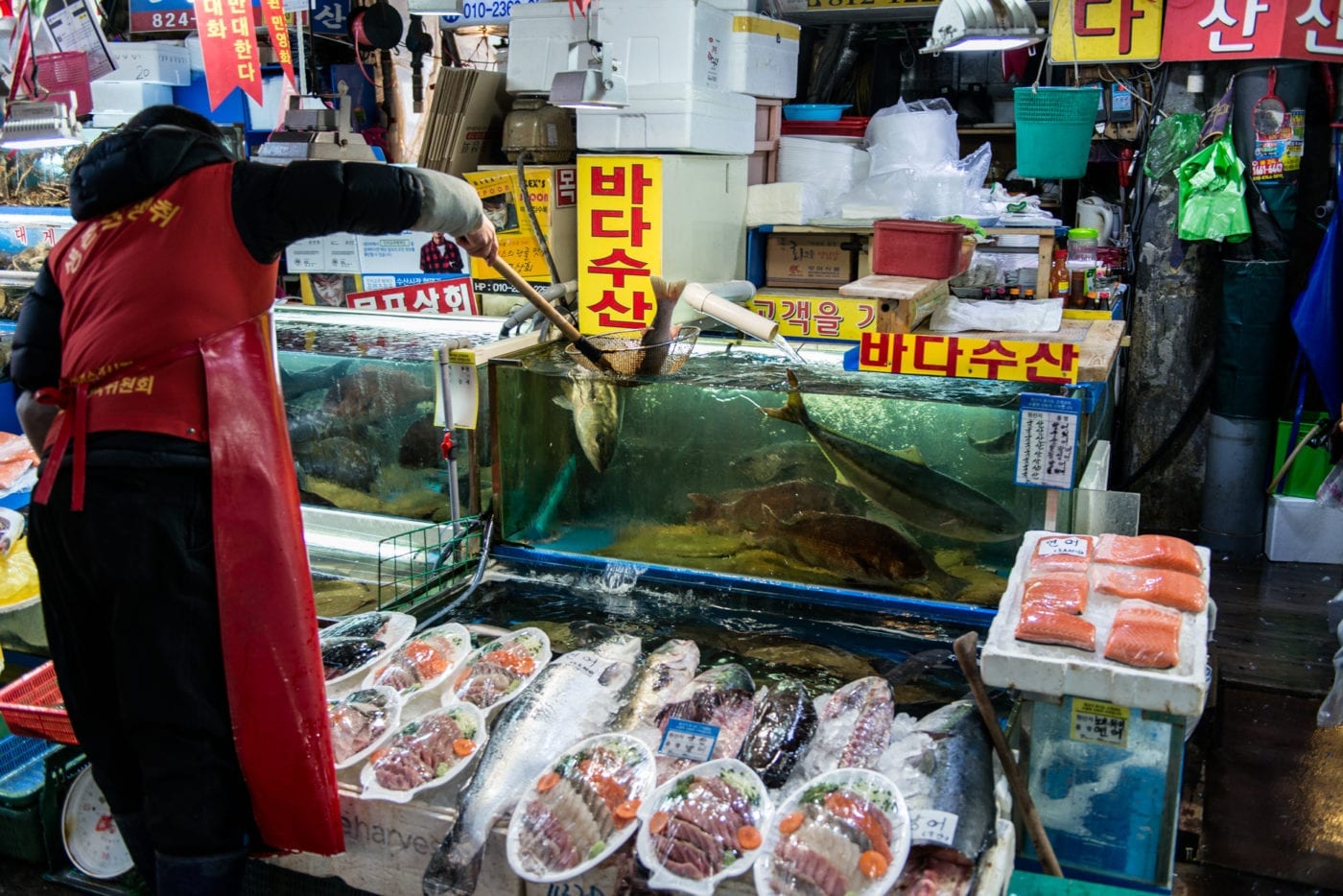 When the vendors learned I was there to find out more about the controversy, their enthusiasm waned. I was invariably brushed off, received with either a wave of the hand or I passed like a baton between vendor after vendor, until I met Chang Bae-jeon, a worker at Noryangjin Fish Market and spokesperson for the opposition who has worked at the market for 45 years. He was the only person who was willing to be interviewed for this article.

According to Mr. Jeon, there are a handful of reasons the vendors are digging in their heels over the big move. Chiefly among the issues is the space allotted to each vendor. The new spaces present a serious downsizing at roughly one third the size of the currently allotted area, which they say leaves very little room for both workers and tourists. 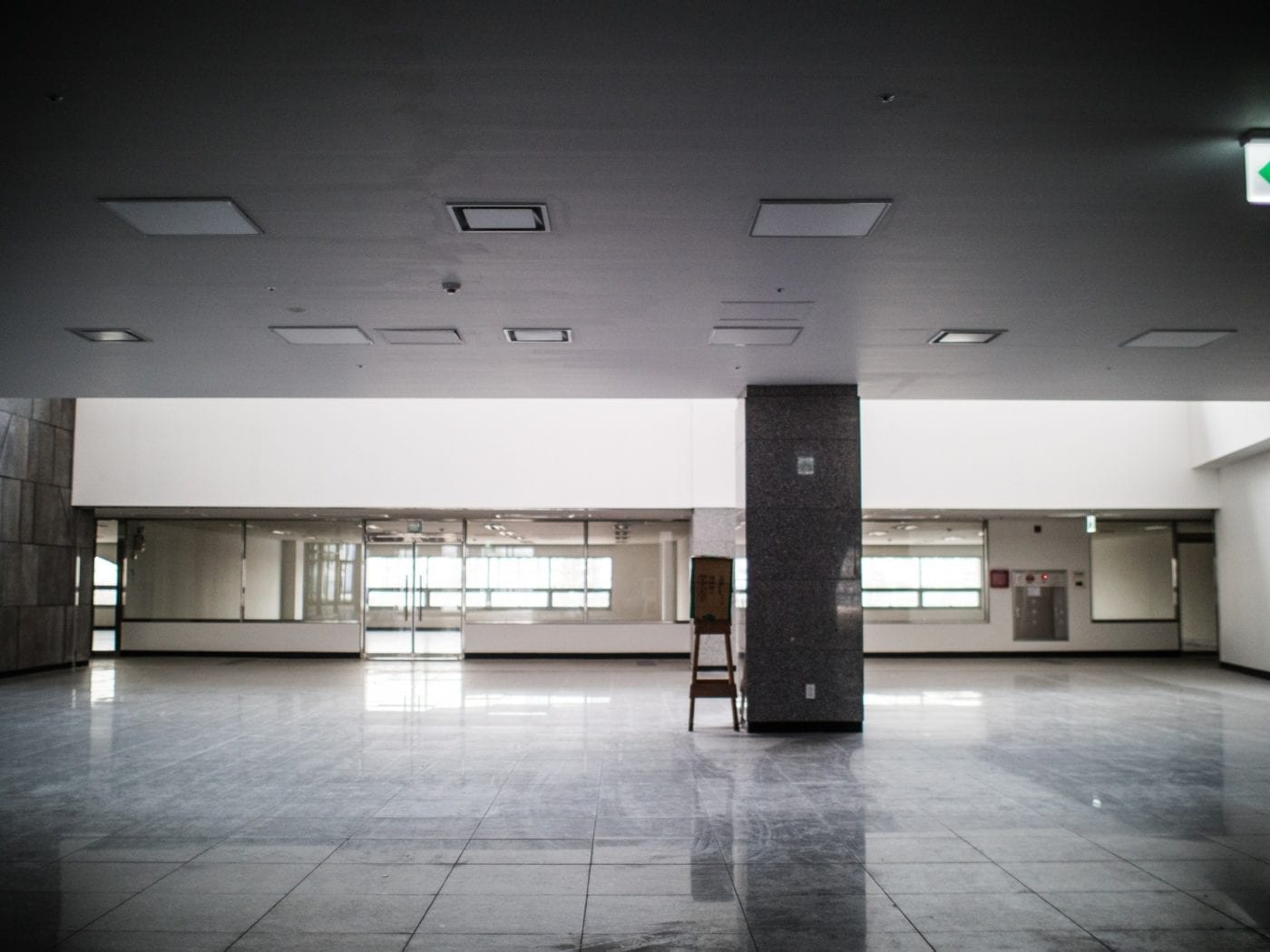 “The building looks good, but practically it’s very small,” he explains, “The new building is like a mart, so we cannot work there. Here (the old market) it’s very large and in the traditional style.”

Making the move less attractive is the new price tag that comes with the decreased spaces: for approximately one third the size of their current workspaces, vendors can expect a 43% rent increase. This has led to some vendors flat out refusing to move into the new space.

Suhyup representatives argue the rents are fair for the revenue the market generates and believe the new building will successfully carry on the market’s traditions. 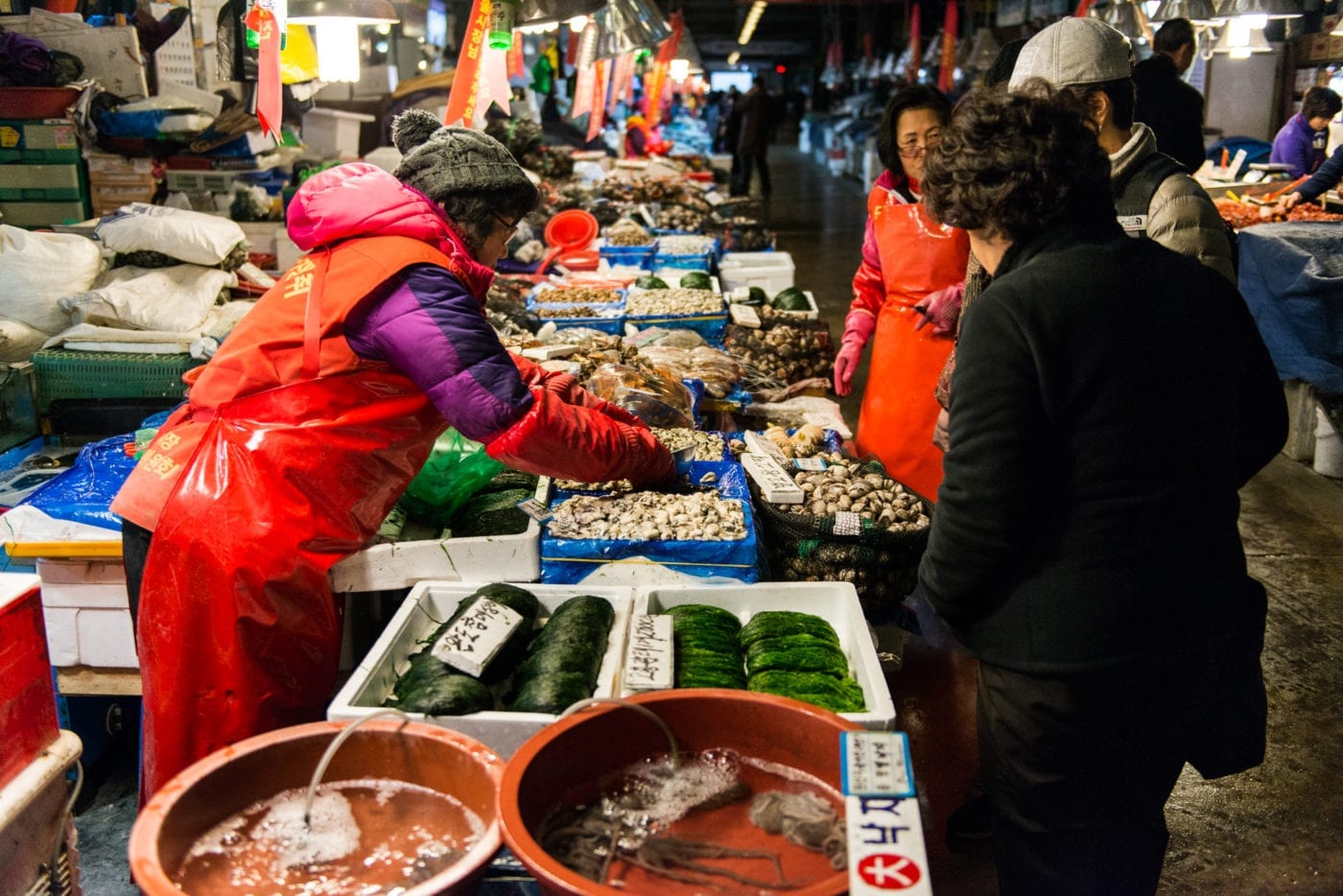 “This building is very traditional and unique, so it attracts many tourists. But if we move to the new building, it’s too new and too tight, and that special feeling will be gone. So who will come?”

Ribbons tied to each stall in the market, representing the solidarity among the fish vendors, show that Mr. Jeon is not alone.

At the time of this article, each side is at a standstill. Representatives of the new building management refused requests to speak with us in regards to the on-going tension. Although vendors have been told they need to be out by the end of January, Mr. Jeon says no consequences have been specified if they aren’t. And as of mid-January, no activity has been seen in the new building and no one looks to be packing up and moving in any time soon. 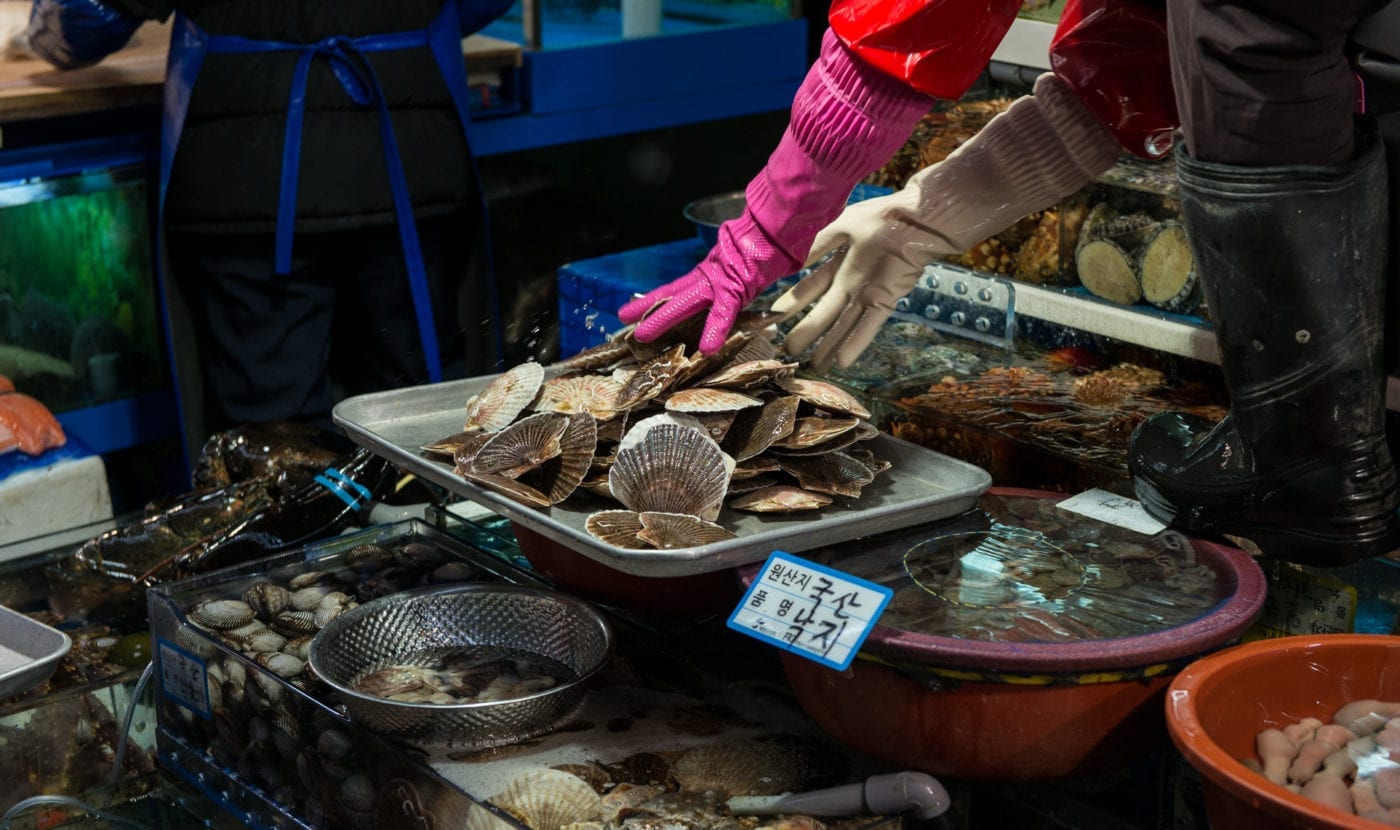 Progress is a funny thing, flared emotions on both sides of the debate have equally valid arguments pushing in  opposite directions. On the one hand, there is something to be said for respecting a tradition that still has enthusiastic support. Walking through the stalls and hearing the beck and call of the vendors, it’s difficult to imagine the same energy in a modern building. Noryangjin Fish Market is a medley of sights and sounds that would be difficult to replicate elsewhere: melted ice mixed with fish blood coating the floor, rusty signs and dark corners, all make the seafood market an attractive destination for seafood lovers and tourists looking for a gritty, authentic experience. 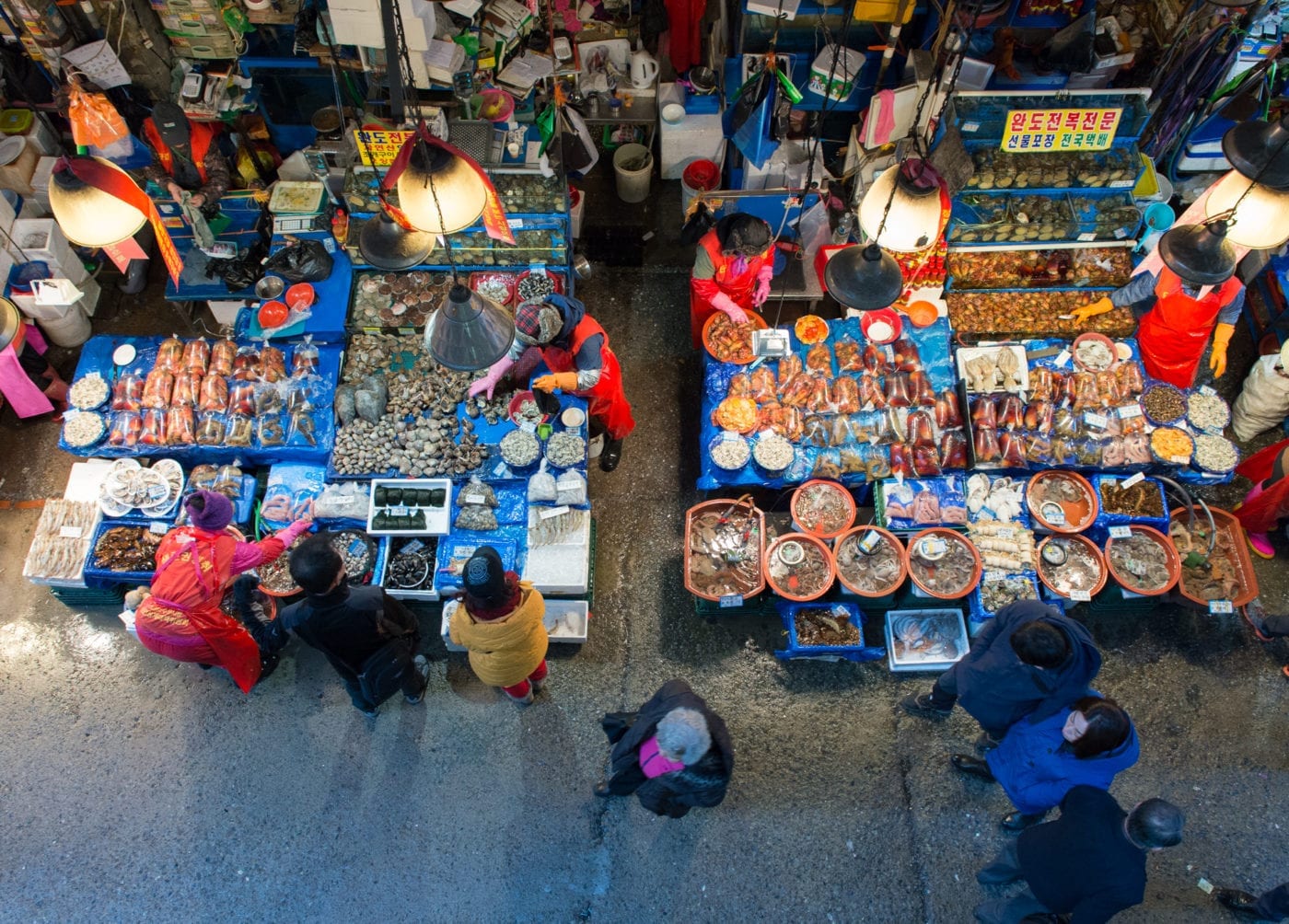 Fans of the current location may fear the landmark turning into little more than a large seafood supermarket, devoid of the messy charm that draws visitors. After all, it’s easy enough to buy seafood at the local E-Mart, or Costco. Part of Noryangjin’s appeal is the faded charm and energy impossible to package up and retail elsewhere.

Would the Noryangjin Fish Market name be enough to draw visitors to a building more reminiscent of an airport or train station than a working fish market? Will this relocation kill the attraction and the revenue it generates? Or is this simply the resistance that comes with any progress? Rumors of a planned hotel and casino do not help the uneasy feeling in the market. 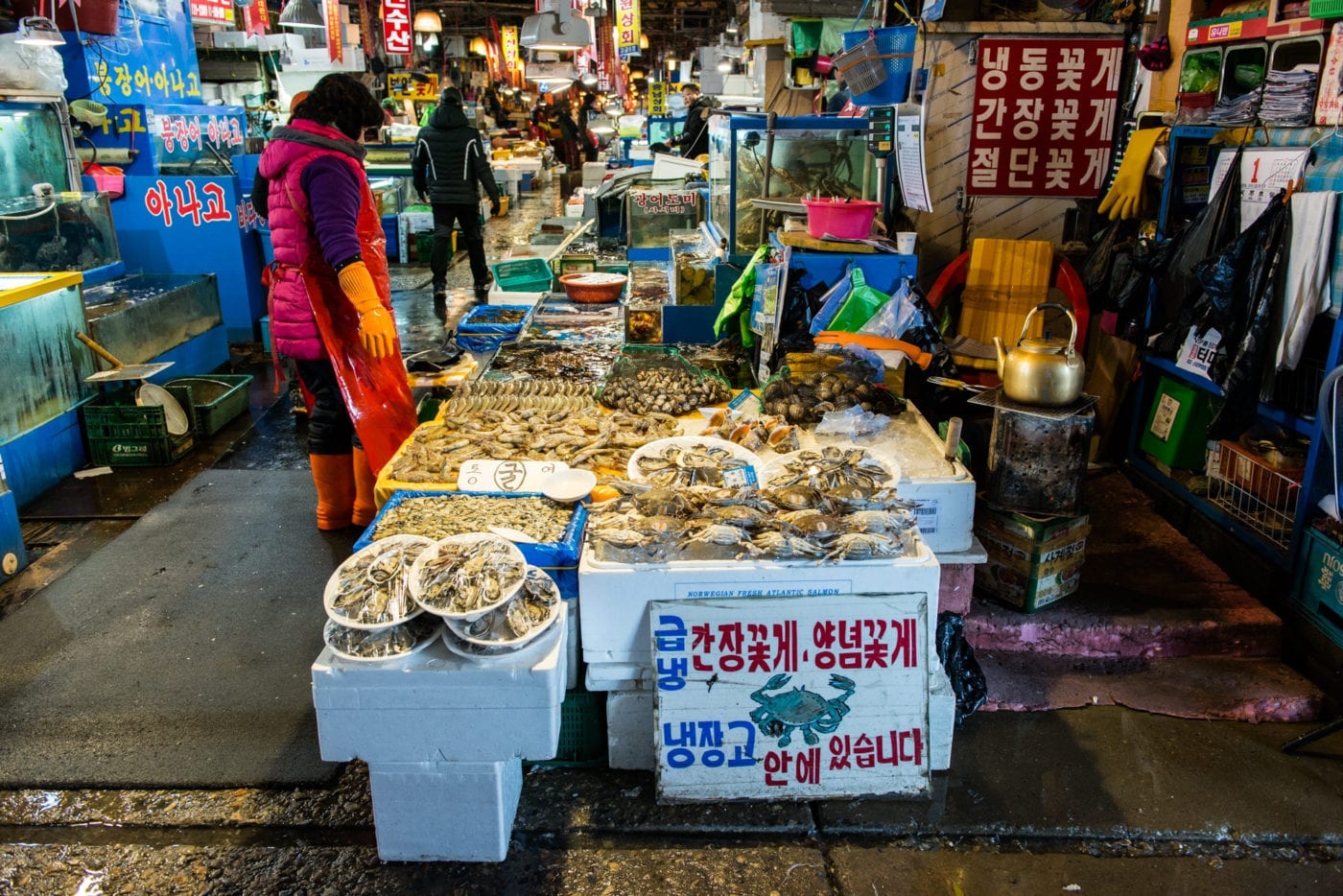 On the other hand, it’s easy enough for outside observers to applaud the decrepit surroundings as a sort of authentic flavor to the neighborhood. But how long does a location need to settle in disrepair? Whilst words like “authentic” and “charming” may describe the market now, there’s only so long such diplomatic adjectives can hold out. Noryangjin Fish Market can not go on forever in a its current state, eventually a move has to be deemed inevitable. Ramshackle buildings surround the area, and the new building could be a sign of restoration for area. If the area does see development in the near future, it could be the beginning of a new era in the market’s history.

Whichever way this turns out, those interested in the old Noryangjin Fish Market had better make a quick visit as it may disappear into history books.