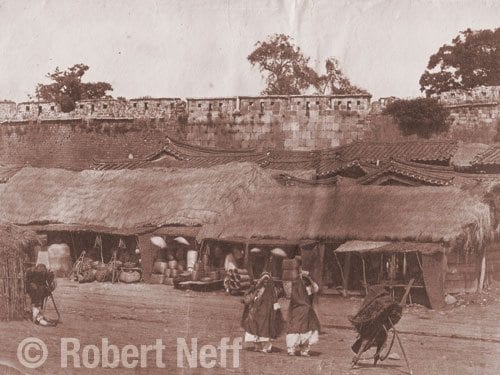 Korea, in the summer of 1894, was a hotbed of intrigue and uncertainty. China and Japan were on the brink of war and many journalists eagerly made their way to Korea in hopes of witnessing the opening shots. Frank G. Carpenter was one of these journalists.

Carpenter described the city of Seoul as being surrounded by a great gray wall—thirty to forty feet in height and six miles in length—that had “been built in nine months by an army of 200,000 workmen, about five hundred years ago.”

The top of the wall was “so wide that two carriages could easily be driven about it” and had “crenellated battlements with holes large enough for its defenders to shoot through with arrows.” It was pierced by eight great gates, each with a curved roof of black tiles and watchtowers for soldiers.

According to Carpenter, “Over the great south gate [Namdaemun], the main entrance to the capital, there are two such roofs, one above the other, which are guarded at the corners by miniature demons of porcelain, who seem to be crawling along the edges of the structure.”

Carpenter noted that the wooden doors were “sheathed with plates of iron riveted on with big bolts, and up until now the common Koreans have believed them a defense against the enemy.”

But he had no disillusions about the walls and the lack of security they provided. According to him, “[The walls’] only use in late years has been to keep out the tigers and leopards” and, with no cannons mounted upon them, would be of little defense against the batteries of the Japanese and Chinese armies.

The city’s gates were opened and closed by “the ringing of a massive bell in the exact center of the city. After this, those who are in cannot get out, and those who are outside cannot get in.” One would think that the fear of being decapitated (the usual punishment when caught) would ensure that the walls were not climbed over, but that assumption would be wrong. It seems that climbing the walls was a common way of entering the city—not only by the Koreans but by Westerners as well.

Just after Carpenter’s departure from Seoul, another group of Westerners visited Korea and described their late-night entry into the capital city.

John Sill, the American Minister to Korea, “not wishing us to pass the night outside the city and exposed to numberless dangers…had the happy idea to have us conveyed to a secluded spot where we were assisted to climb over the walls.

“A score of Koreans sat astride the top and lowered strong ropes. The ascent was perilous and very difficult. It took at least a half hour to hoist one of our friends, who being enormously stout, gave to the Koreans an immense deal of difficulty, and, besides, he, terrified to find himself swinging in space at the end of a rope, to our great delight uttered howls of fright. Thus was our entry into Seoul something less than triumphant.”

They were not the first or the last ones to climb the walls—in fact, two months later, the teenage sons of a visiting Bishop climbed the walls after they were abandoned by their Korean guides. The boys later informed King Gojong of their plight and heads apparently rolled.

The tradition of closing the city gates ended after the introduction of the streetcar. The great bell at Bosingak, once used to signal their opening, also became a victim of modernization. Now, ringing at Bosingak can only be heard on New Year’s Eve when the mayor of Seoul strikes the bell 33 times, welcoming in a new year and hopes of prosperity.