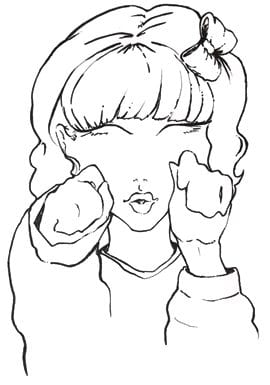 Words by D. Chase Kang and Rhiannon May, illustrations by Sidney Goulet

Aegyo is a Korean term that describes the practice of behaving with a deliberate and unabashed sense of cuteness and naive charm to endear oneself, to disarm, or to invoke a general tone of innocence (as used, for example, by children to their parents).

In other words, it is essentially an insidious female manipulation tool used to turn men into simpering, obedient butlers and valets!

How is Aegyo used?

Aegyo is an ideology as well as a practice. It informs most expressions of contrived cuteness from Hello Kitty to tilting one’s head to the side and flashing the “V” sign. It is deeply connected to the Yin-Yang ideal which stipulates that what is soft will overcome what is hard, and that openness or vulnerability may transcend strength.

Remember this the next time your girlfriend claims her bag is too heavy or complains about walking from the parking lot to the theater. She may be using relationship judo on you!

Ultimately, just like alcohol and firearms, aegyo can be either good or evil based on its intended use.

Some women are simply what we used to call “girly.” In Korean, we say they “have (a lot of) aegyo” (애교가 있다/많다). This can, however, sometimes be manifested through laziness, feigned weakness or an utter lack of responsibility. To discourage this behavior, gently nudge her in the direction of more “mature” adult behavior by informing her that her aegyo is “not going to work this time” (애교 떼우지마).

In the case that you wish your girlfriend was a little more affectionate, simply suggesting that she lacks aegyo (“너는 왜 애교가 없어?” / “애교 너무 없다.”) is often sufficient to cause most Korean women to backpedal in their behavior so as not to be seen as tactless or un-feminine.

The idea of “fluttering your eyelashes” at someone, or at least feigning a certain softness as opposed to going in guns-a-blazing, is certainly nothing new. The not-altogether dissimilar concept of “aegyo” in Korea may take things to a new level, but is this a device employed only by women? Heck no!

I remember the first time I got hit with the aegyo stick. My boyfriend at the time wanted me to go on a trip with him and his friends and I, for various reasons, was not so keen on the idea. Right at the point where I was absolutely positive there was no way on Earth I was packing my bags and heading off to sleep on the floor with a bunch of other people in a seaside hut with no air-con or proper shower, his voice started wobbling in tone.

When I stopped mid-sentence to look over to see what was going on, his bottom lip popped out and his eyes got bigger. Before a surprised laugh had the chance to escape my lips, a male head was being nuzzled into my arm in a move reminiscent of an oversized puppy, and he begged “Pleeeeeeeeeeease~”.

I ran to the bathroom to hide until the aegyo attack had subsided. I also ended up going on the trip. Would I have been thus persuaded if he’d feigned anger instead? Probably not. Apparently aegyo is more powerful than one might think!

Have you used or experienced aegyo before? Share your experiences in the comment section below! You can also check out Dating In Korea: 8 Cultural Differences To Expect.