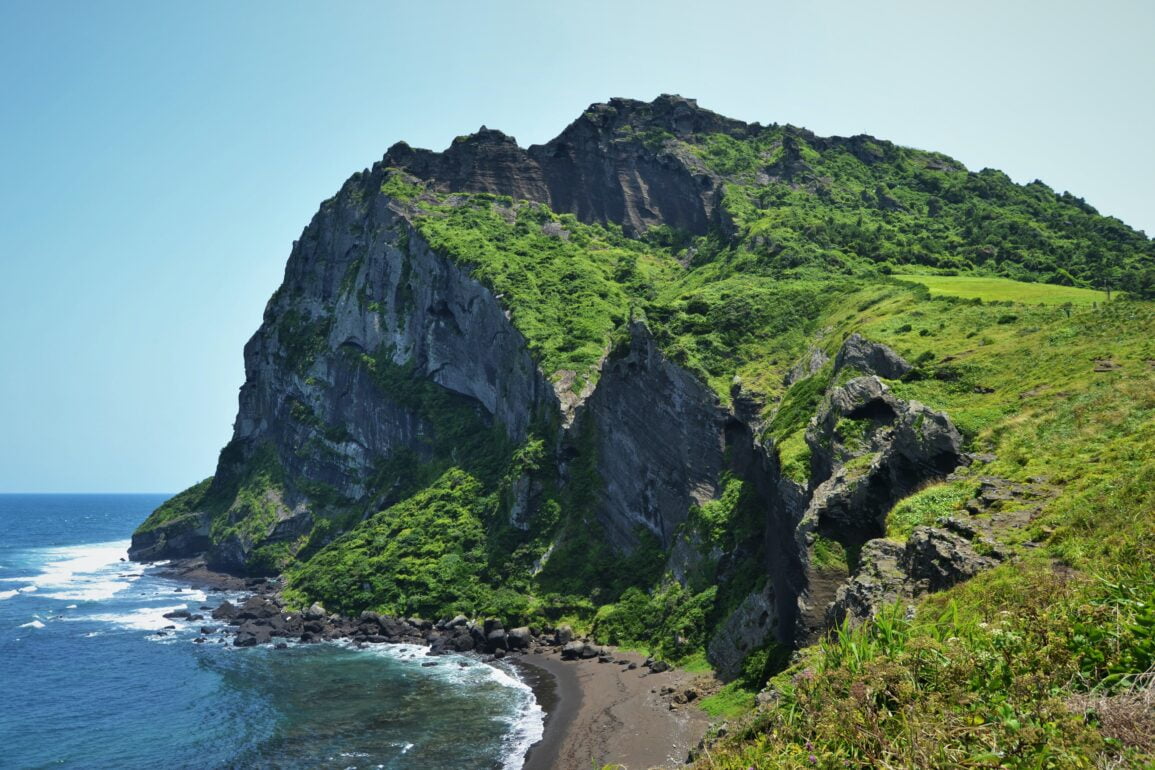 Words and shots by Charles Montgomery

Scenic beaches, beautiful waterfalls, statuesque horses roaming free in green fields, cliffs, caves, lush vegetation, and citrus plantations stretching off into the distance – these are only some of the beautiful sights that walkers will encounter on Jeju’s Olle Trail. The Olle trail (in Korean, 올레길 or “Olle Gil”) is a priceless chance for anyone, from casual day-hiker to vibram-encased fitness fanatic, to easily enjoy the often spectacular views that Jeju offers.

About the Olle Trails

The Olle trails, or “courses” as they are called, cover quite a lot of ground, totaling over 393 kilometers. There are nineteen main courses and five spur courses, three of which are on smaller islands lying just offshore of Jeju proper. The territory covered is diverse and one day’s walk can take one through towns, past kilometers of fields bounded by the representative stone walls of Jeju and then suddenly to the coast, to reveal some of Jeju’s famous haenyo (해녀, female divers, most now quite elderly) emerging from the sea in their black wetsuits.

“Olle” is the Jeju word for the slender pathways that snake from streets to the front gates of houses and connect people to the outside world. The original idea of taking that word and turning it into a world-class walking trail on the perimeter of Jeju came from Suh Myungsook.

Suh was a one-time magazine editor who, after walking the Camino de Santiago (an 800 km trail from France to Spain) determined that she wanted to build a similar trail on Jeju. With a team of volunteers, Suh began finding and mapping the hidden roads of Jeju, looking for walking paths, restoring paths that had fallen into disuse and even creating new paths for hikers. The first course opened in September of 2007, and the trail has expanded steadily, with only a few more kilometers left to be mapped, creating a path around the entire circumference of Jeju.

The courses are varied, ranging from sections tunneled out of dense vegetation to some sections laid out on city streets and even the highway. The trail is quite clearly marked with a variety of symbols, including blue and yellow paint, blue and yellow streamers, and little blue statues of horses constructed from pipe. The Olle have been arranged to maximize time with nature, but there are toilets and restaurants along the way.

Bathrooms can be found at the start and end of each course, and frequently in well-marked locations in between. The courses do wander around quite a bit – for the first four days it feels as though you never leave the shadow of Seongsan Ilchulbong Peak (a volcanic feature next to course 1, and completely worth a side-trip) even though you travel nearly seventy kilometers.

One of the wonderful surprises of the trail is the friendliness of Jeju residents. On two separate occasions, when we couldn’t find our hotel, we were bundled up by locals, packed into their cars and driven to our destinations. Wherever we stopped, people wanted to talk to us, and the hotel owners we dealt with were super-friendly, in some cases even finding us our next evening’s lodging. Do not, however, expect most Jeju residents, particularly outside of the cities, to speak English – bring your phrase book!

The best time to go is in the off-season, when lodging is cheap and easily available. During traditional Korean holiday season – in summer from July 15th to August 27th and around the holidays – lodging can be difficult to find, although this is a larger problem near the big cities of Jeju-si in the north and Seogwipo in the south. The trails never stray far from civilization, and pensions, yeogwan (여관, cheap motels) and minbak (민박, guest rooms) abound, particularly near the coast. Camping opportunities do exist, but they are relatively rare, and although we brought a tent, we ended up not using it, much to my wife’s dismay.

One word of advice is to take the official estimates of how long a particular course will take with a grain of salt. We found that we typically took about 1.5 times as much time as the Olle Gil literature estimated, particularly on the days we were carrying backpacks. Also, on your first day, be sure to pick up your Jeju Olle-Trail Passport; at various points along the trail you can enter stamps into it, and if you complete all of the courses you will receive a verification sticker to memorialize your accomplishment.

You can find more information about each of the trails (maps , duration, etc.) on the official website here (all in English).

Flights leave from Gimpo Airport near Seoul to Jeju-si at all hours of the day, and once there the 100 bus will take you to Jeju-si Intercity Bus Terminal, from which all island locations are accessible. The public announcement systems on the intercity buses announce all Olle Gil courses in English, so they are very easy to find. On Jeju, taxis are assigned to geographic regions, and when you land at the airport be certain to grab the handout that lists their phone numbers.

While you’re in Jeju, make sure to find and try these unique specialty foods!

If you’d rather relax than walk or hike, we suggest these 10 Jeju Beaches to soak up the sun.