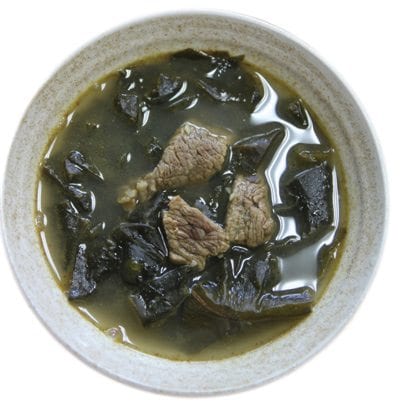 Okay, so it’s January 1st and you’re in Korea, which means you’re a year older. That’s not just figurative like we would say back home, but literal. Add one year to your age January 1st. You were born one year old too, so you have to add two years to your age for some part of the year. A baby born on December 31st is two years old the next day!

Now the actual food you eat on New Year’s Day, both solar and lunar, to become a year older is tteok-guk, or rice cake soup (Check out 10 Online on p. 11 to learn more about it). The food that you’re supposed to eat on your actual birthday, however, is miyeok-guk. The reason for that is that your mother ate it when you were born. Not just for breakfast, but for lunch and dinner too. And not just for one day, but for 30 days straight. Mothers who have just given birth are encouraged to eat this soup with every meal because it is said to help in the production of blood lost during delivery. Not so sure about the science behind that one, but the health benefits of seaweed seem to increase every year that more doctors, both Western and Eastern, do scientific research on this food so uniquely consumed in East. 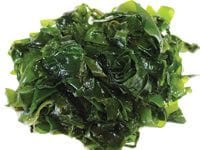 Now you may say, “But my mother didn’t eat it.” That may help explain why many Westerners don’t like it. I must say it was about year 6 or 7 in Korea before I finally started enjoying the stuff. The fact is that the rather slippery, almost slimy texture is not one that we’re used to and can be off-putting. Don’t let that stop you. Now that I’ve gotten used to the texture, I’ve acquired

a taste for miyeok-guk and it’s one of my favorite foods to see served when I sit down for a meal. Typically a nice beef broth, this is a delicious soup that warms you to the bones. I must say though, I still can’t help avoiding the bigger bits.