{Korean Destination} How to do Incheon to Busan by Bike

South Korea has a vast amount of natural beauty telescoped into an endearingly petite compass. However, that beauty will remain largely undiscovered if you do not trouble yourself to venture out beyond the urban settings in which so many of us are employed. As many are already aware, Korea boasts numerous hiking trails that have been favored haunts for the perambulatory adventurous for many a decade now!

Less well known, though, is that Korea also now boasts genuinely outstanding cycling trails that have been heavily invested in with the passage of the national government’s “Four Rivers Project” developing the infrastructure of the titular rivers Han, Nakdong, Geum, and Yeongsan. The granddaddy trail of them all—and the backbone of several subsidiary trails—is the trans-national route running from the west coast of Incheon across through immediately neighboring Seoul and then down, down, down to the thriving metropolis of Busan in the far southeastern corner of the country, many hundreds of kilometers away.

This trail is for the most part a world-class route, following first the Han, briefly crossing over the mountainous spine of ranges running through the country, and then tracing the course of the Nakdong River along clearly marked dedicated paths. The trip will require a reasonably fit individual for just six to seven days to complete.

“K-Water” (official website), the governing agency over the country’s rivers and the paths therein, has invested a large amount of effort into the aesthetic design of the various weirs that now cross the nation’s rivers and which interact with the cycle paths themselves. The result is that many of them are now literally architectural works of art. These simply exquisite engineering works are a delight to behold and really set a standard for other world utilities to follow!

The Four Rivers trails also pass by countless historical sites, wildlife preserves, famous restaurants, and natural landmarks. A full guide to sightseeing on a bicycle is available at Riverguide in Korean and English.

The tranquil rural scenery of one splendid vista after another—which on a bicycle you become part of, rather than being a mere observer from within the confines of a vehicle—will form a large part of the memories of anyone that commits to completing this route. As a philosopher has noted, the journey ultimately becomes you! On several occasions I found myself thinking how beautiful Korea was as I passed by a brood of swans at the bank’s edge or the reflection of cliff faces jutting out abruptly into the water.

What might be the greatest obstacle to anyone cycling this route? Perhaps not having trained hard enough in the switchbacks traversing the French Alps during the off-season of the professional circuit? Or not being in possession of the latest aerodynamically fluted composite carbon fiber titanium alloy professional racing cycle?

I would suggest not!

The biggest obstacle is actually being able to string together the time necessary to complete this route. While a few dedicated cyclists can manage Seoul to Busan over little more than a weekend (see korea-randonneurs.blogspot.kr), it’s an incredibly difficult task. It’s also a journey on the road rather than the scenic paths of the rivers, and riding through both day and night—an endeavor would severely tax the majority of recreational cyclists. So we suggest taking a long way instead.

At 633 km in length, averaging a distance of 100 km a day, the trip would require six days. Five solid hours on the bike at a not-unreasonable 20 km/hr will give you 100 km a day and leave time for meal breaks and stops, though you are likely then to need an eight to nine-hour stint in total produced consecutively over many days.

How difficult is the route? I felt tired at the end of the first day and STILL felt tired from the previous day’s efforts on the second, third, and subsequent days. But the muscles “hardened up” quickly enough that the pain barrier became more just overcoming general fatigue than struggling with any excruciating agony.

There is little information along the route itself in relation to accommodation for the night or regarding places to stop and eat. Without preparation, every night was utter “guesswork”, just pulling out the mobile late in the evening to look for an accommodation symbol on the electronic maps that indicated the location of the nearest motel of some nature. Not really what one wants to be doing at the end of a hard day’s ride! 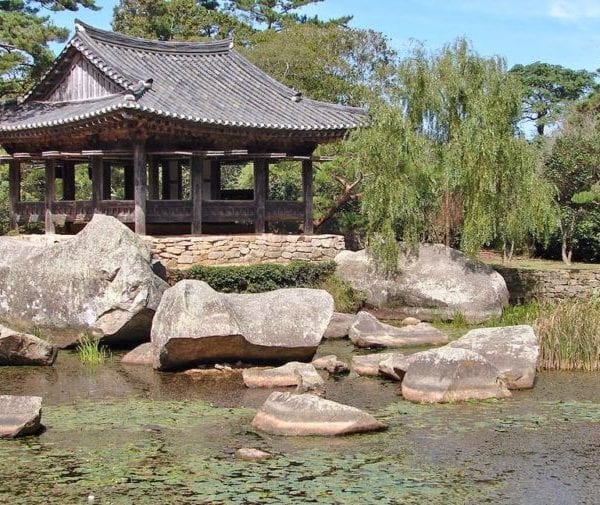 To prepare a little better, take a gander at www.riverguide.go.kr. The site hosts information on both camping grounds and Biketels, which are accommodations along all Four Rivers routes where you can store your bike and rest. These motels, minbak, yeogwan, and even Hanok villages are guaranteed to have bike storage space for travelers on two wheels. Phone numbers for Biketel reservations are available on the Biketel map, while reservations for camping facilities can be made directly on the site. And while the route guides are available in English, all accommodation info is in Korean—so ask a friend for help if your language skills aren’t ready for the challenge.

RiverGuide also has an extensive menu of “Gangbyun Matjip” or riverside foodie finds. The selection is organized by location and food type. Plan your eating in advance to make sure you taste the best of each region you pass through.

The trail is still a “work in progress” in sections. The route immediately into Daegu and immediately out were nightmares to navigate, being poorly signed and with little provision for cyclists (e.g. poor signage and little to keep cars and bikes out of each others’ way).

Part of the route just a little further south of Daegu is on gravel trails through hills, with some ensuant grade to ascend that may be more suitable perhaps for mountain bike enthusiasts. I personally detoured around this section by following Route 5, which approximately parallels the river for some 40 km from Bakseokjin Bridge (夢戮霞掖) down to the road’s intersection with Route 1022, Nakdong Way (釩翕煎), almost immediately on the north bank of the river.

There also is a long, steady grade along the final five kilometers climbing up to the Ihwaryeong Rest Area (檜‘“) which represents the halfway point separating the respective catchments of the Han and the Nakdong. However, there are otherwise relatively few points of climb in the course of the journey.

If you are interested in vacation ideas for the summer, check out our article “5 Relaxed Summer Getaways“.

|Malcolm Wrest has just finished his twelfth and final year in Korea. An instructor in Incheon University, he is thankful for the many wonderful memories in Korea that he will soon be looking back on.|