Hwaseong Fortress in Suwon: A Wall with a View 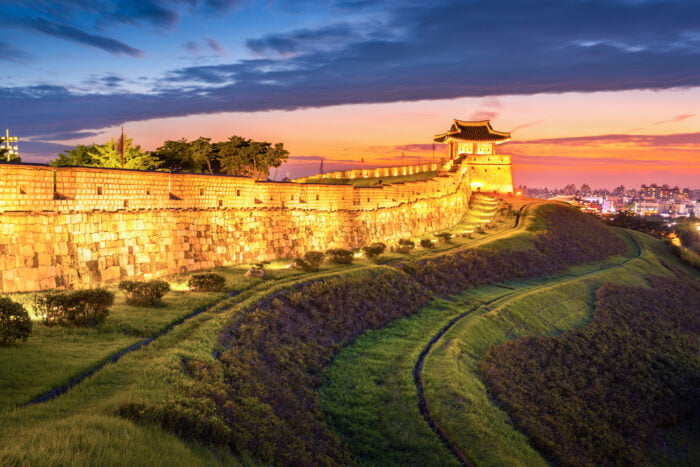 Hwaseong Fortress and the city of Suwon are so intertwined that it would be difficult to fully appreciate one without experiencing the other.

Hwaseong Fortress, Suwon’s most famous landmark, is an 18th century fortification encircling the city’s center. Hwaseong was built under the reign of King Jeongju when he moved the royal court to Suwon, and the wall and its environs were awarded UNESCO World Heritage status in 1997.

But, to visit Suwon, you would not be given the impression that the city is revelling in the honour of being home to one of Korea’s first UNESCO World Heritage sites. Despite occasional bus stops and signs, Hwaseong Fortress is not overtly advertised. It’s not ignored; it’s more like it’s just accepted as another part of the city, like a park or major river that has always defined the city’s character.

Liken this to Seoul, where you arrive at a site like Dongdaemun to find the large stone gate, essentially standing there minding its own business as the city roars around it. Hwaseong Fortress exists similarly within Suwon, which has grown in and around the high and thick stone walls.

How to Experience Hwaseong Fortress

Hwaseong Fortress has much to marvel at, but to really experience it you must take the easy-going 6 km trek around its battlements. Do not be put off by the imposing Paldalsan which looks down on Paldalmun gate, where most excursions begin. Hwaseong encircles the centre of the city, so consider going the opposite direction.

From Paldalmun gate walk down the wide market street perpendicular to the gate, cross the bridge and take an immediate left. Around thirty metres in front of you is a set of steps that will lead up to the battlements close to Bongdon (봉돈, Beacon Tower).

From here Hwaseong comes into its own. Up on the wall the change in the decibel level is immediately noticeable. By taking this route, you not only save your energy to enjoy the walk, but you also allow yourself the ideal opportunity of finishing off your visit on top of Paldalsan, which offers a spectacular view of Suwon as the sun is setting.

Appreciating Suwon from the Fortress’ Walls

While exploring the many unique towers and gates that make up the fortress wall, it’s well worth appreciating how the city has grown around the wall over the past two hundred years. Quiet and peaceful neighbourhoods blend in with the huge stone fortifications giving the impression they have always been there together. The wall serves as a local amenity for residents who can be seen picnicking and relaxing in its peaceful environment: undoubtedly, a far cry from what the original designers imagined.

Surrounded on either side by alleys, take a moment to wander off the main route and explore the old neighbourhoods, such as at Hwahongmun (화홍문) where Suwoncheon stream (수원천) passes through the wall. Here, the walls around the quiet neighbourhood close to Hwaseomun-ro street (화서문로) have been decorated with vibrantly painted murals by local artists.

For large stretches of your walk along the wall you will find that you are alone, experiencing new and more amazing views of the early modern military and 20th century urban architecture coalescing uniquely and often beautifully with every bend the wall makes. The city and its 200-year-old wall are always at their own perfect point of fusion.

For more information about Hwaseong Fortress, visit the official website.