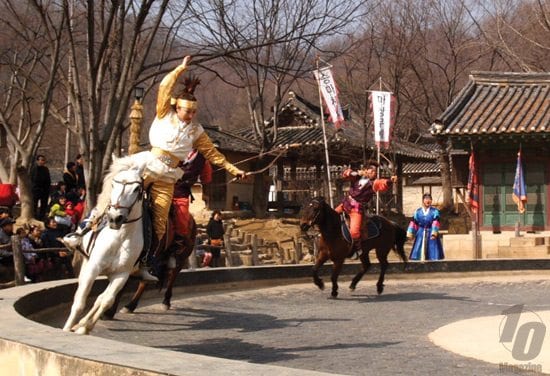 Yongin’s Korean Folk Village is a worthwhile visit for an interactive piece of Joseon Dynasty history. The living museum features a large number of authentic historical buildings and landscapes, while also showcasing animated performances inspired by the era.

One of these aforementioned shows is the “Equestrian Feats” act, a short acrobatic horseback routine executed by a team of seven self-trained athletes. The team, comprised of six males and one female—all dressed in imitation hanbok—surprise and thrill audiences with their risky horseback stunts.

Accompanied by rousing music and a Korean-speaking presenter, the team bound into the performance zone with an infectious sense of energy, building excitement by galloping around the ring. The septet incite gasps from the audience with their awe-inspiring acrobatic feats, performing impressive gymnastics, accurately shooting arrows while in full motion, and standing on horseback while launching swords into the air. The twisting and turning of the riders’ bodies would be impressive were they merely doing this on solid ground, let alone while balancing on a moving creature.

Based on battle practice from the earlier part of the Joseon era, the show represents the dexterity of knights during this period and the arduous training they went through in order to support their country. The display is not an authentic replica of a battle during this period, although the performers are acting out a tradition indigenous to Korea.

The demonstration has been impressing visitors to the Folk Village since October 3rd 1974, approximately a year after the establishment opened. Though it is inspired by Korean tradition from 500 years or so ago, you could say it has become a custom in itself at the Folk Village, drawing a crowd to the outdoor arena on a daily basis.