Boseong Tea Fields, a Green Tea Feast for All the Senses 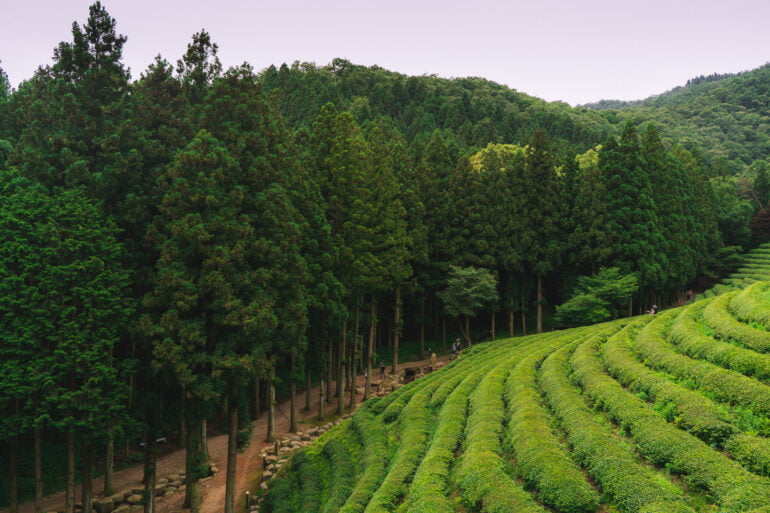 Set in the southern reaches of Jeollanam-do Province, the gorgeous fields of the Daehan Daewon green tea plantations in Boseong are without a doubt one of the best places to dive head-first into Korean tea culture. Not only do they provide an immersive tea experience, but they also serve up scintillating vistas that are hard to beat.

A day spent at the Boseong tea fields

Arriving at the grounds, you’re greeted by towering pine and bamboo trees that create a lush canopy. The ethereal forest gives way to the cascading plantation, with an assortment of cafes at the foot of the hill. Taking a walk up the hill, you’ll find various lookout points, as well as signage pointing out some famous K-dramas which have been shot here.

The plantations themselves provide a visual spectacle of astounding proportions. With steep, almost unending rows of tea bushes hugging the hills, you’d better be armed with your camera. There simply isn’t a bad angle to be had.

To get the most out of your green tea experience, embark on one of the paths around the park. The peak of 350 meters is deceptively high —  during cooler months you should be able to easily ascend it but in summer be sure to bring some water and a fan. The views, however, are rewarding. Just a short walk from the fields is the Tea Museum of Korea, where you can learn about the tea-harvesting process and view tea plants from neighboring countries.

The Daehan Dawon green tea fields comprise more than 5.8 million tea trees and produce a whopping 40% of South Korea’s green tea. Quite remarkable for what seems like such an unassuming part of the country. During the 1930s the Japanese deemed Boseong the best area to grow green tea. It was razed to the ground during the Korean War, only to be re-built in 1957 by Chang Yeong-Seop into a fully organic plantation.

Then, there’s the tea itself. What makes green tea (or 녹차) so different from other varieties native to Korea? For starters, it’s almost impossible to objectively describe the flavor profile of green tea to someone who’s never tasted it before. On its own, green tea can have quite biting, astringent notes with earthy undertones. This astringency is balanced out by adding a sweetener, which is why green tea ice cream is such a delicious treat. Having it in latte form, too, is a great way to neutralize the somewhat bitter taste. There’s a huge variety of green tea merchandise on sale at the shops around the entrance to the park, from face masks to snacks, and even green tea bibimbap.

Cap your visit to the Boseong tea fields with the ultimate cultural experience: a tea-tasting ceremony held at the neighboring Tea Museum. Buddhist monks from the 14th century are credited with giving tea a place in the Korean consciousness, and at first tea drinking in Korea was reserved for the elite classes as a ritual that signified wealth and prosperity. Over time, tea has become an integral part of Korean culture. After observing the drinking rites, you’ll get your own opportunity to prepare and serve some tea under the tutelage of watchful experts.

When to go and how to get there

The best time to visit the Boseong tea fields is generally from March to May, with the beginning of May marking the annual Green Tea festival. June and July also provide some stunning conditions, although with the onset of monsoon season from the middle of July through to August, the weather can be uncomfortably humid and erratic.

Boseong is about five hours from Seoul and three hours from Busan, with the intercity bus being the easiest and cheapest option to get into the town. There’s a dedicated local bus running to the plantations from the bus stop. Look for the 녹차밭 signboard at the terminal and tap your T-Money card on boarding to enjoy the 15-minute ride to the plantation. You could also catch a taxi, which will cost you in the region of ₩12,000.