A Look Inside the Thriving Adult Shops of South Korea 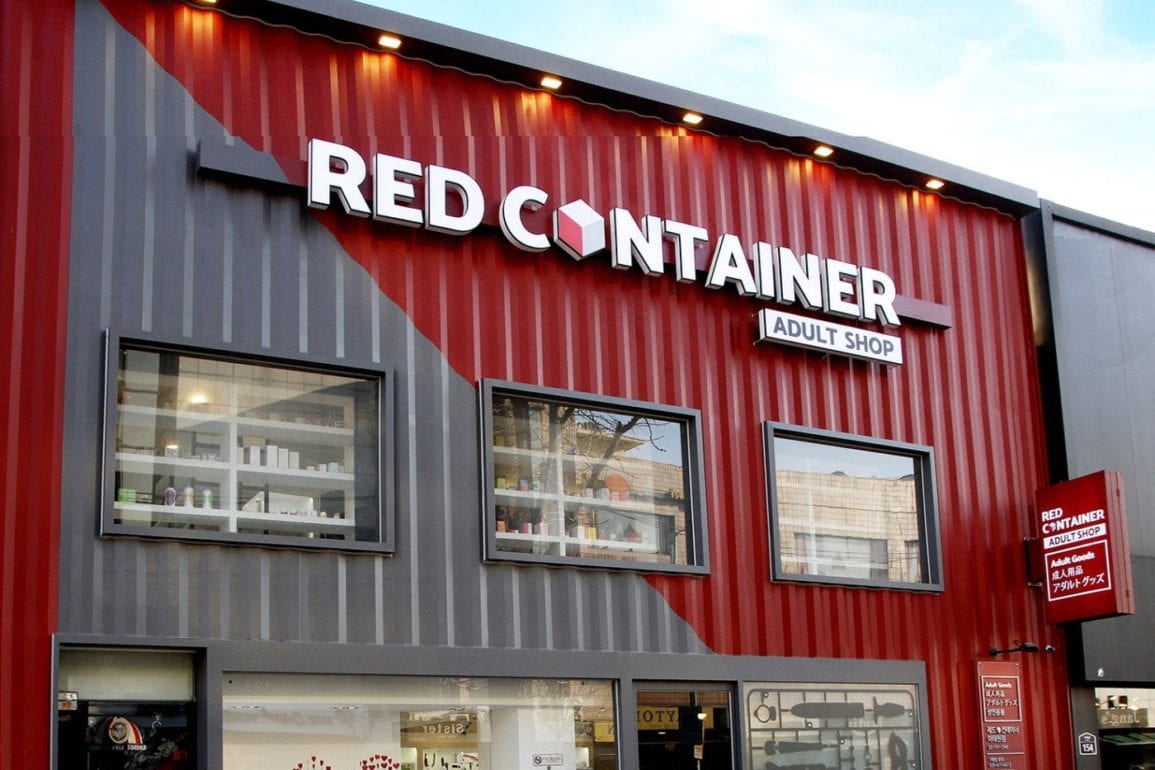 Piooda is one of the many adult shop brands that seemed to have appeared out of thin air in the past year and a half. Since early 2017, dozens of both small and large adult shops/ sex toy shops have overtaken the main streets of  high-profile spots such as Itaewon, Gangnam, Hongdae, and Myeongdong, obliterating the notion that adult merchandise (성인용품) is only for an atypical niche demographic.

Adult Merchandise in Korea’s Past

According to Koo Jong-hoe, general manager of another Korea-based adult shop brand called Red Container, sex toys in Korea’s past often sold in dingy spaces in run-down buildings or out of inconspicuous metal containers on street corners. In fact, Red Container’s name is both a nod to the history of the industry as well an attempt to actively refashion the image of sex toys in the country.

With an exterior created to look like a physical metal box painted an ostentatious bright red, the store is hard to miss if you frequent the area, unapologetically pointing to the brand’s philosophy that adult merchandise should not be a discreditable or tucked away industry.

“Our dream is that Red Container will become a landmark in Itaewon,” Koo told 10 Magazine. “We hope that someday we’ll be a place that people can reference as a meeting point. ‘Let’s meet in front of Red Container,’ they might say.”

The Reason For The Sudden Boom In Adult Shops in Korea

According to Piooda’s founder Kang, the biggest reason for the sudden boom in adult toy shops in South Korea is due to a regulation repeal that happened around 3 years ago in the country. Before then, importing sex toys into Korea was illegal and prohibited under an ethics regulation (음란물 규제) – restrictions that claim similar moral ground to the internet censorship regulations that ban pornography in the country.

Kang had previously attempted to open a different sex toy store in 2007, but struggled to find quality products that she could sell at her shop due to the strict import restrictions in the country at the time. Eventually, she decided to not go through with the plan, opting to wait for a better time to open her business.

“Now that the law has changed, importing these products have become much easier. It’s now easier for people to start a business selling these products, which is why you see all these sex toy shops that are bigger, nicer, and brighter popping up around the country,” Kang continued.

However, the regulation change is not entirely clear on which products are allowed to be imported into the country. According to Kang, the lack of clarity surrounding the changes often leaves the final decision up to customs officials when the products are being brought into Korea.

“I don’t understand why people think it’s ok for the government to control their citizens’ sex lives,” Kang said with a note of exasperation in her voice. “I don’t believe [the government] should have a right to control people’s individual pleasure.”

But despite the difficulties that still surround the industry, the regulation repeal seems to have provided a means for a changing mindset towards sex to take root in Korea. The repeal has inevitably turned the Korean adult merchandise industry to become, if not bigger, at least increasingly more public in the country – a natural turn of events as businesses that sell prohibited content are usually not as overt as their lawful counterparts.

Piooda, for example, is located in a largely residential area. The shop takes it name from the word “to bloom” in Korean, and was carefully chosen by Kang in reference to the individual “bloom” that each person can experience when they take care of their sex life and own pleasure. “We wanted to use a Korean word as opposed to an English word in naming our store,” said Kang, “because we wanted to reference what we believe is a big change that is happening in Korea.”

“I think sex culture is definitely changing in Korea,” Kang told us. “But every country has a different culture, and each country’s sex culture can only change according to how much the citizens can accept at the time.”

A look inside Piooda will likely wipe out all notions of what a typical adult toy shop should look like in most people’s minds. With walls painted a pastel green and small lubricants, gels, and sleek looking vibrators lined neatly along the small shelves around the shop, Piooda resembles more a quaint stationery boutique than a store that sells adult merchandise.

Red Container as well, offers a sleek interior design that showcases versatile products that range from vibrators, lubricants, costumes, condom cases, to gag gifts (i.e. coffee mugs with phallic handles). The brand’s long-term goal and vision, according to manager Koo, is to establish itself as an adult store that anybody can visit and buy from with ease.

“We believe that it isn’t a shameful thing to visit adult stores, and our goal is to promote a positive image of using adult products in daily life,” Koo continued.

Kang echoed similar sentiments: “I strongly believe that we don’t have to be in hiding. We’re just selling items that humans need in their lives. We’ve had many people tell us that they’re very happy we exist.”

The (Lack Of) Sex Education in Korea

But though both Piooda and Red Container emphasize their vision to repackage the image of their industry in the country, Piooda’s founder Kang also expresses her concerns about the potential consequences of the sudden prevalence of adult merchandise shops in Korea.

“On the one hand,” Kang told us, “the prevalence of the shops gives people great access to the products. On the other hand, however, because most people are not very knowledgeable about what kind of products they want, which products are safe, or how they should take care of products, I have concerns about the sudden boom.”

“Many adult shop owners as well are sometimes not very aware of their own products, and some stores that seem really nice on the outside sell the same low quality products as in the dingier places,” says Kang.

According to Kang, Piooda’s highest priority is finding high quality safe products and selling them for reasonable prices. However, complications surrounding import laws and the often low quality of domestic products has made this vision a challenge at times.

Koo as well touched on the difficulty of the lack of sex education in operating Red Container. Koo claims that finding and recruiting qualified employees is his biggest concern for Red Container’s future. “There aren’t many people who are well-educated about adult toys, and many people feel that working here won’t be helpful to their resume or future job prospects,” Koo told 10 Magazine. “As a result,” he continued, “there isn’t a big pool of potential employees that we can hire from.”

The (Hopeful) Future of the Adult Toy Industry in Korea

But despite certain challenges, adult merchandise shops in South Korea are thriving.

Red Container’s revenue has, since its opening in early 2017, prompted the brand to establish 13 other locations around Korea, both in and outside of Seoul. Its first location in Itaewon began to bring in thousands of customers every week within just a few months, most of whom are women in their 20s and 30s, as well as couples.

Piooda has also been steadily growing its customer base this past year. According to Kang, around 60% of their client base are women followed by couples, and ages range mostly from those in their mid 20s to early 40s. According to Kang, however, there have also been cases of a couple in their 70s, moms and daughters who have come in together, and men who come in to buy gifts for their partners or friends. The shop also welcomes quite a large LGBTQ community.

Kang hopes that sales will continue to grow to the point that Piooda will be able to expand into creating its own products and hosting sex-ed workshops. “We’d eventually like to do more than just sell products,” Kang told us. “We call ourselves a lifestyle shop because I wanted to create a very human-friendly sex-positive company.”

Did you find this article helpful? Leave a comment below!

Koreans make up the majority of the customer base for both shops. “When we first opened,” Kang tells us, “we had a lot of foreigners, but now we get mostly Koreans.”

“It definitely surprised me, but I think it’s a good sign for the growing open-mindedness towards sex in the country,” continued Kang.