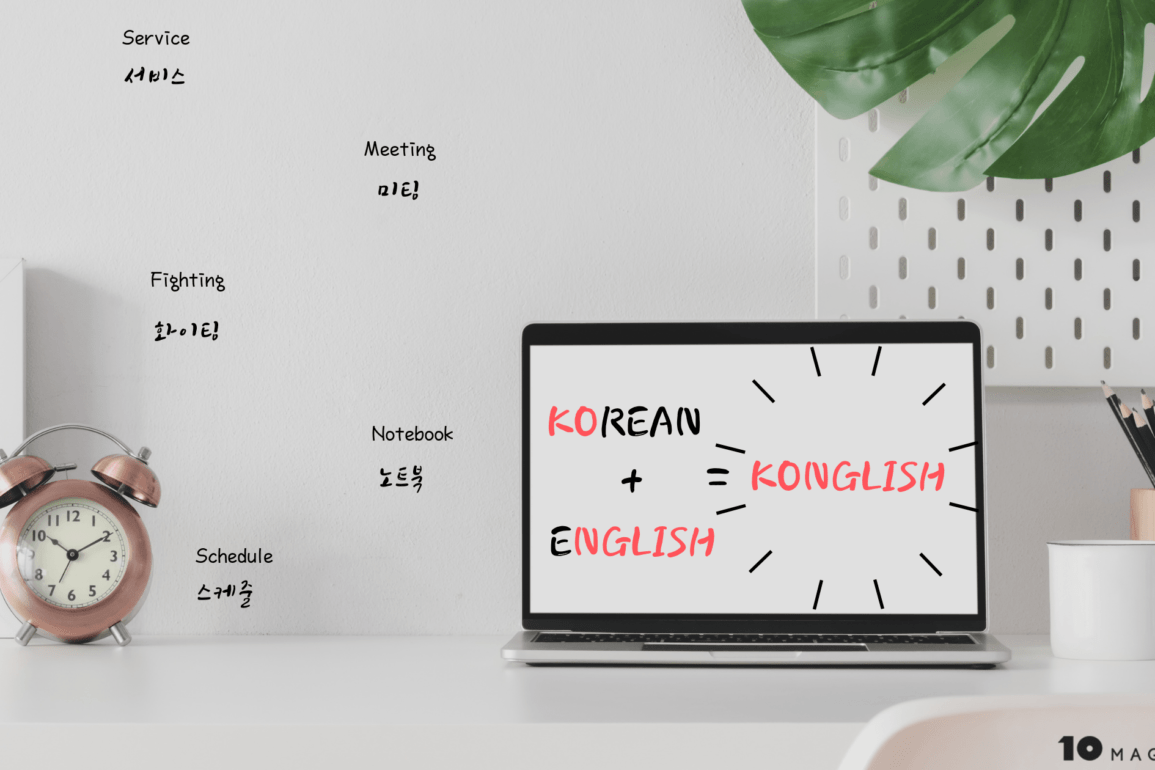 Have you ever had a conversation with a Korean and felt relieved when they started using English expressions, only to feel more confused than ever? That is because they were speaking Konglish, which refers to English (and other languages) used by Koreans, but in ways that are completely different from their native usage. Well, have no fear! We will look at a few of these Konglish expressions to ease some confusion.

No, this is not referring to the shape. If anything, it can imply a ‘circle’ of friends. But to be specific in the world of Konglish, it means clubs. This word is more frequently used in colleges, referring to the different types of organized groups, like sports, politics, hobbies, and arts clubs.

English: Which circle will you be joining this year?

An innocent word that we know to mean a book bound together with empty pages for you to write notes. But not in Konglish. This is the word used to mean a laptop computer. A certain brand of laptop computers named one of their series ‘Notebook’ to show how convenient and portable the laptop was and the word stuck. So, the next time you tell a Korean that you will buy them a notebook, be careful what you are promising.

English: My computer broke down so I need to buy a new one but this time, I want to buy a notebook (laptop).

In English, “health” refers to one’s well-being or the state of something, especially a physical body. In Konglish, “health” generally refers to a gym, spa, etc., but can also be used as the verb “to lift weights”. (Coincidentally, the Konglish word for health is ‘well-being’.) The Konglish usage came from gym advertisements encouraging people to join their establishments to better their health. However, most of these gyms were founded by former weight-training professionals who also offer personal training.

An otherwise professional word that is anything but that, it does not mean what you think it does. This is not used for an appointment or a group of people coming together to discuss something. It actually means a blind date, especially among college students. Blind dates were made into events where a group of girls arranged a meeting with a group of boys, hence the term ‘meeting.’ For business meetings, you would have to specify that it is a business appointment or meeting or say conference instead.

English: Do you want to go to a meeting (blind date)?  All of the cute guys will be there.

Okay, this word on its own is vague, but not in Konglish as it means to exaggerate or overdo something. Many Konglish expressions make you wonder if a lazy college student who never wants to finish saying an entire expression coined these terms.

English: Don’t over (overdo it). Sending flowers is enough. You don’t need to throw a party./ That person is over (overreacting). It’s not as bad as he says.

This actually describes the act as opposed to defining it, since someone has to be cunning to do this. This is Konglish for ‘cheating’, as in copying someone’s answers or using deceptive ways to score higher on a test. Konglish words tend to mix up adjectives to verbs or verbs to nouns, and this is one example.

English: “Hey, you did cunning (cheated), didn’t you? There’s no way you could’ve gotten this score!”

You might have heard ‘complex’ used by Koreans from time to time, especially when the conversation is about looks or personality, with it used as a noun to mean an insecurity or Achilles’ heel. This is a shortening of ‘inferiority complex’, but its Konglish usage does not adhere to the original term, but instead describes the traits that a person might be subconscious about.

English: “Being short is my complex.” / “Don’t tell our boss that he doesn’t have humor. I heard that he has a big complex about it.”

Once you find out how it is used, you cannot go back to using it correctly. The use of this word makes so much ‘sense’ that you will quickly adapt to the Konglish version. It is used as a noun to mean wit, smarts, awareness, and a combination of many other words. Sometimes you can use it to commend someone for acting quickly on something with class, or it can mean that someone has a sense of style.

English: “We survived that awkwardness, thanks to your sense (quick thinking).”/ “You have sense (good sense in business), so I’m sure you will run the business well.”

The word that otherwise means optical, means appearance in Konglish. To be specific, this word is used in conjunction with good looks. It can also be used to describe the aesthetics of a place. You might also have heard this word to describe positions of a member in a K-pop group. If a person is a ‘visual’ in a Kpop group, it means that he or she was chosen mainly for their appearance and helps the group look good.

English: “That person who got interviewed has the visual (good looks), so I’m sure she’ll get chosen.” / Jin of BTS was chosen as a visual.

In English, ‘service’ has a wide range of uses, like a ceremonial meeting (like a Sunday or funeral service) or in customer service (a helpful activity or aid). Although there is a slight connection to the original meaning, the Konglish use is quite different, as in: 1) customer service; and 2) perks, bonuses, or freebies. Of the two, the Konglish usage is most often for the latter.

English: “The service (customer service) in that hotel is so good that they get good business no matter how expensive it is.”/ By any chance, can you give us fried dumplings as service (for free) if we order black bean noodles and sweet and sour pork?

Learning Korean is tough and here we thought we had an advantage of knowing English in a country set out to master that language. But now we have to unlearn what we learned and understand Konglish as the Koreans intended. Everyone, fighting!

Did you find this article on konglish words helpful? Leave a comment below!

Also check out: How to Say “Hello” in Korean + 11 Key Phrases