The Top Ten Bowls of Naengmyeon 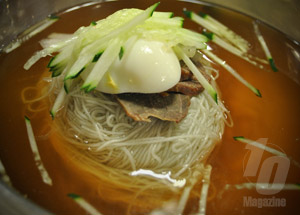 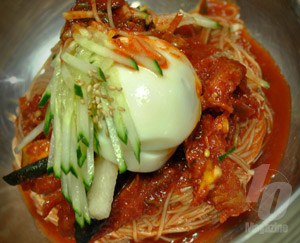 There are two dishes that are best served cold. One is revenge and the other is naengmyeon. But while the former could land you in jail, the latter will just set you back several bucks. Mul, or water, naengmyeon is a North Korean style of noodles submerged in an icy broth. There’s also bibim, or mixed, naengmyeon, which substitutes a dollop of red pepper sauce for broth. There are two main variations on the noodles. Pyongyang-style naengmyeon is made from buckwheat, while Hamheung-style is made from potato or sweet potato starch.

The restaurants in Seoul were selected from foodie blogs, the recommendations of trusted friends and from my own previous dining experiences, while the out-of-town reviews were provided by guest contributors.

The Ojang-dong neighborhood is known for two things: cheap furniture and naengmyeon. So after you are done picking up new kitchen chairs, drop in for a hearty bowl of Hamheung-style noodles. It’s my rule of thumb that the more old people you see in a restaurant, the better the naengmyeon. This place is no exception. The yuksu, meat broth tea, is also very nice here. The difference between a mediocre nyaengmyeon and a great nyaengmyeon lies in the yuksu.

This tiny restaurant about five minutes from Jeonju’s bus terminals may not look like much, but the owner sure knows her naengmyeon. W6,000 gets you a huge bowl overflowing with firm buckwheat noodles, half an egg, fresh cucumber and thinly sliced radish kimchi, all soaked in a perfectly tangy, slightly salty iced broth. Add a spoonful of piquant gochujang, and you have noodle perfection, Jeolla-style.
470-9 Geumam-dong, Deokjin-gu, Jeonju, Jeollabuk-do. 063-271-4799

The night I dropped by here there were a surprisingly large number of young people digging into their bowls of naengmyeon. Fortunately, I brought along my friend’s 70-year old mother for the senior citizen perspective. Mamma Kim liked the extra thick Pyongyang-style noodles. The broth is a bit bland, but presumably healthy thanks to its mixture of ten vegetables and won’t leave you feeling like you just drank a steak. This lets you get creative with the condiments. I added globs of spicy mustard, Mamma Kim added sugar. To each their own.
W9,000. Daeheung Stn. (line 6, ex. 2). 147-6 Yeomni-dong, Mapo-gu, Seoul. 02-717-1922

The Dongnae area of Busan has a reputation for delicious, unadulterated Korean food, and this popular noodle house is no exception. A refreshing bowl of mul naengmyeon or bibim naengmyeon runs at W7,000 and comes with all the condiments to spice things up. Complimentary beef broth served in a teapot is a nice touch. Bring some company because the spacious interior and balcony can accommodate nearly 200 noodle-slurping patrons.

A lot of naengmyeon places aren’t too creative with their names, but at least you know what you’re getting. Hidden amongst the high-rise apartments is this tiny restaurant about a 15-minute walk from the station. It serves a very satisfying bowl of noodles and is quite popular with the locals. You might enjoy the large hard-boiled egg too, unless you’re ovaphobic like me and always give it away to a friend.
W7,000. Mapo Stn. (line 5, ex. 4). 127-2 Wonhono 4-ga, Yongsan-gu, Seoul. 02-719-1290

The first time I tried out their Hamheung naengmyeon it was the dead of winter. Despite the icy cold broth this dish warmed me up. I later learned that was due to a process called homeostasis. Don’t know what that means? Then look it up. Anyway, lots of ajumma perms and shoe polish-black hair here. After your meal, head back out to the furniture market to pick up a bookshelf for your archive of old issues of 10 Magazine.
W8,000. Euljiro 4-ga Stn. (lines 2 & 5, ex. 8). 101-7 Ojang-dong, Jung-gu, Seoul. 02-2266-0735

If you come here during lunch or dinner time, you can expect to stand in line outside for up to 10 minutes like I did. For three generations this place has served Pyongyang-style naengmyeon since 1950 after its originators fled to Seoul from North Korea. The entire menu here in fact features cuisine from above the 38th parallel. But what makes this restaurant stand out is actually their chicken, which is served as a refillable side dish.
W8,000. Euljiro 3-ga Stn. (lines 2 & 3, ex. 11). 18-1 Jeo-dong 2-ga, Jung-gu, Seoul. 02-2267-5892

If you find yourself in the Chungmuro area and in the need for naengmyeon, you should go straight for Jin Go Gae. According to the placemats, it’s been around since 1963 and I doubt very much has changed, including the interior, since then. But forget your scissors: you’ll need a katana to slice through these noodles. That’s because they’re made from a combination of buckwheat and potato starch, giving them an extra chewy texture. And a generous portion of diced pear gives the broth a refreshingly sweet taste.
W8,000. Chungmuro Station (lines 3 & 4, ex. 6). 30-16 Chungmuro 3-ga, Jung-gu, Seoul. 02-2267-0955

I had always considered myself as a Pyongyang-style type of guy. But after eating here, I began to question everything I knew about naengmyeon. The fantastic Hamheung noodles in a spicy broth made me go back for more yuksu. This restaurant prides itself on its hoe naengmyeon, which includes raw skate. And while you’re there, order a side of kimchi mandu, which are the size of tennis balls. You will not be disappointed.
W8,000. Yeongdeungpo Stn. (line 1, ex. 5). 7-32 Yeongdeungpo-dong 3-ga, Yeongdeungpo-gu, Seoul. 02-2678-2722

This Pyongyang-style naengmyeon would make Kim Jong-il consider defecting. The Jang family has run Uraeok since the late 1940s and is perhaps the granddaddy of all naengmyeon restaurants in Seoul. The décor was probably considered opulent a few decades ago, but today just looks retro, which I think benefits the overall atmosphere here. It’s no coincidence that places that double as barbecue houses tend to serve the best naengmyeon. The savory broth, a mouthwatering cut of meat and the chewy buckwheat noodles all add up to make this a true gustatory delight.
W10,000. Euljiro 4-ga Stn. (lines 2 & 5, ex. 4). 118-1 Jugyo-dong, Jung-gu, Seoul. 02-2265-0151