The 10 Most Insane Korean Pizzas 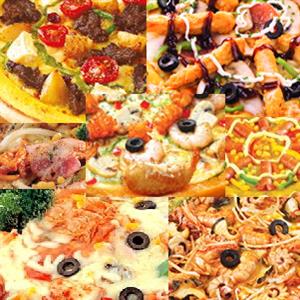 Korean food is delicious and understandably, Korea is fantastic at making it.

But, if we have one critique about Korean chefs, it is maybe that they are a bit too brave, when it comes to the pizzas that they create.  For your viewing pleasure, we have rounded up the top 10 craziest Korean pizzas.

This pizza combines bulgogi, or Korean sweetened and sauteed beef, with crust made up of fried cheese. Fried cheese, we say, “Yes, please.”  No, we don’t apologize for that rhyming.

Truly taking the Irish nature of this pizza to heart, the creators of this carb-filled masterpiece have utilized the potato, in the form of fries and its sweeter cousin in the mashed sweet potato ring surrounding the crust. The whole pizza was then topped with sweet corn and garlic sauce. This with a beer and you will swear it is Saint Patty’s day, at least that’s what we were told.

Yep, it is exactly what you think it is. Among layers of cheddar cheese and rings of mashed sweet potatoes, amidst green bell peppers and mushrooms, there lies golden crispy pieces of fried chicken, which are lovingly drizzled with barbeque and cream sauces.

I will say that if Korea is warning you that something is hot, heed that warning! Suffice it to say, this pizza will pack a punch and while the base of this pizza is relatively normal and sweet potato is shockingly absent, it is the inventive use of buffalo chicken that sets this pizza apart. The piles of the spicy chicken decorate the outer-edge then bacon is stacked upon the chicken. The rest of the pizza is then decorated with broccoli and sweet corn. But the absolute best part of this pizza is the sweet cinnamon crust. No, we don’t understand why either.

This pizza takes toppings and crusts to a whole new level. While we here at 10 Magazine are still confused on what exactly is German about this, “Deutsche,” pizza, we recognize that the insanity that is the Deutsche Bite Pizza definitely deserves a spot on this list. With miniature cheese filled breadsticks making up the crust, the rest of the pizza is decorated with miniature hot dogs, a variety of vegetables, including sweet corn and green peppers, and covered in cream sauce.

We can only imagine that this pizza is the love child of a drunken affair between Italian cream pasta and pizza. Instead of tomato sauce, this pizza utilizes the loved cream pasta, which is then covered in cheese and topped with ham. Delicious and terrible for you.

It was so good, they made a sequel. This pizza really is built to look like a seafood island with built-in “Appetizers” of breaded and fried coconut shrimp lining the crust. Furthering the island concept, it is also home to most major forms of sealife, decorated with spicy squid, bits of octopus and smaller shrimp, all blanketed with mozzarella cheese. If you prefer your food to crawl before you bite, you might want to swim far and fast away from this one.

This far into the list, this pizza would seem pretty normal, jam-packed with every type of seafood once living under the waves, including shrimp, octopus and clams. However, what earns it a spot so far down on the list is it outrageous crust flavor: broccoli and cheese soup.  It is just so perfect… I can’t even.

This pizza confuses us. With sweetened egg tart crust, barbeque steak meat toppings and hunks of brie cheese, this could either be the best thing since the quiche or just another thing that I will regret ingesting.  (I am looking at you, McCol…)

Finally, truly stretching the the limits of what qualifies as pizza, fusion and ultimately food is this culinary Frankenstein’s monster. With no crust or bread to speak of, this pizza is built upon layers of breaded sweet and sour pork, which is covered in kimchi and mozzarella cheese and then sprinkled with olives. In considering this pizza, I can only recall Jim Gaffigan’s words on fruitcake: “It just doesn’t add up.  Fruit: good. Cake: great. Fruitcake: nasty crap.”